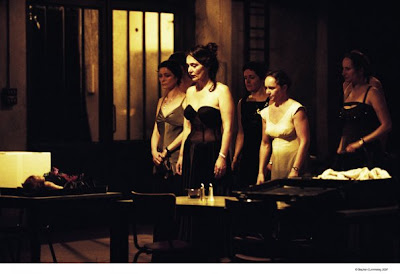 With her production of Attempts on Her Life at the National earlier this year, Katie Mitchell created the finest and most important theatrical event of the year. With her new production of Women of Troy, she comes damn close to bettering it.

To read some of the initial reviews, you’d think that Mitchell has put on stage the most obscure, inhuman, baffling, deliberately contrary piece of avant garde theatre ever staged. In fact, quite the reverse is true. Compared to Attempts... or Waves, this production of Women of Troy is surprisingly straight-forward. It is predominantly ultra-naturalistic, but, more importantly, it is utterly, achingly human. This is the first production of a Greek tragedy I’ve seen that has totally immersed me in the absolute desolation felt by the characters.

In a cavernous warehouse (an incredibly detailed, perfectly realised set from Bunny Christie) the surviving wives of the murdered Trojan leadership are imprisoned while their fates are decided by the 29 Greek generals. As the play progresses, the sheer misery and hopelessness of their situation becomes increasingly unbearable.

Mitchell’s production is unfussily modern-dress, with the woman looking as if they have just been forcibly taken at gunpoint from after dinner drinks at a posh dinner. It is a brilliant conceit, and one which absolutely achieves the often-intended but rarely realised feat of suggesting the action of the play could plausibly be taking place somewhere in the world right now. Michael Gould’s understated performance as Talthybius, making a weary, apologetic official of this Greek herald, creates a perfect understanding of exactly the world into which these women have been thrust. It is his remorseless, tactful efficiency that really horrifies. Far more than posturing or declaiming could achieve, his careworn attempts at reasoning with Andromache (the excellent Anastasia Hille) to give her child up to be murdered are terrifying precisely because they are so human.

Sinead Matthews’s performance as Cassandra is similarly intelligent. With her words virtually unintelligible and near-hysterical she absolutely conveys the idea of a woman half-crazed by a curse that bestows unbelieved prophecy upon her. Even we the audience cannot really understand what she is doing or saying, only that she is in the grip of madness. Although the play really revolves around Hecuba (Kate Duchêne) and Andromache, the way in which Helen (Susie Trayling) is portrayed is inspired. We first see her through the windows of an upstairs office within the warehouse, which has been utilised as a makeshift cell. The way she is kept apart from the other women, and can be seen pacing frantically about, dabbing at her nose and repeatedly checking her appearance in a small compact mirror, quietly adds to the horror of the mise-en-scene. Here is a woman who knows that every possibly violence is to be visited on her, and is terrified beyond comprehension.

While a majority of the play is largely naturalistic, the production also deploys some gorgeously impressionist moments. It is these which lift the whole production from being simply a fine reading of a play to being a work of art. At several points the women break off from their conversations and begin to dance to amplified big band jazz music. At another point Cassandra leads the women in an attempt to sing the Carpenters’s Close To You. Near the end, while listening to classical music on the radio, the women suddenly break into chokingly gorgeous choral song. Indeed Gareth Fry’s sound design is perhaps his best yet, evoking alongside the carnage of war a kind of David Lynch other-worldly shuddering industrial noise. Elsewhere, for the chorus-speaking moments, there is the sound of the imaginary “fourth wall” being slowly raised, like the vast metal door at the far end of the warehouse, and the supposed light from outside that fourth wall floods the stage - and for those moments, the women can talk to the audience. In many ways, it makes excuses for the play’s prevailing naturalism - to represent physically moving the fourth wall in order for the characters on stage to be able to acknowledge the audience could be considered a step too far, but here it comes across as both witty and inspired.

What this production achieves is both a viciously lucid telling of the story and a sublime comment on human capacity for inflicting suffering, and what the effects of that suffering actually look like up close. Without once suggesting any direct contemporary parallels - fewer than Euripides himself intended when writing the play during the Peloponnesian War - this bleak picture of the suffering of a nation’s ruling class manages to suggest the all too real victims of any war or revolution you care to imagine. It does so without once preaching, seeking to score points, or sacrificing any artistic integrity. Its use of metaphor - the way it engages the audience, requiring them to interrogate as well as be “shown” - is perfectly judged. The whole is moving beyond words, visually ravishing, and utterly harrowing.
_______________________________________________ 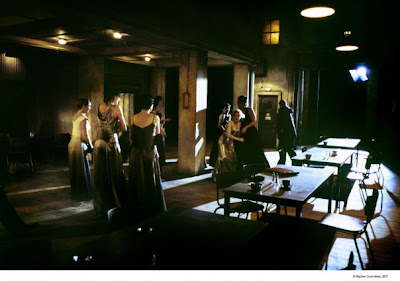 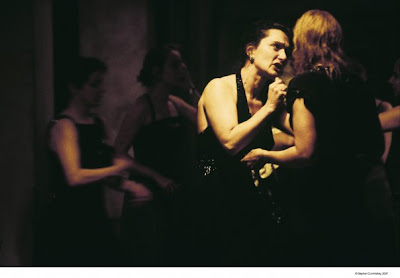 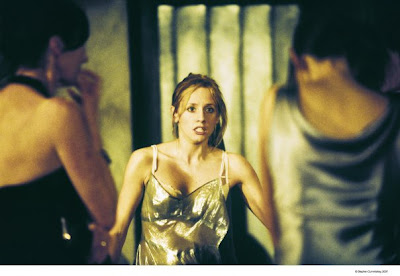 We've talked about this, so I won't bang on about it here. But I really think you're using terms rather sloppily here: if this production is "predominantly ultra-naturalistic", I am Aretha Franklin.

Its set design is naturalistic; that's about it. The costuming isn't: the glad rags of the women are making a point. The lighting isn't: in stage terms, naturalistic lighting is lighting that doesn't draw our attention to it, whereas this pseudo-ambient approach leaves us squinting the whole damn time. Ditto delivery. The sound design is admirable, but is a noticeable entity.

And I'll say a little prayer for you :-)

I dunno. I honestly think that the lighting is pretty much naturalistic except for the times when it is serving the more impressionist moments. Ditto the acting. It strikes me that with a lot of Mitchell's work this objection to not being able to see/hear things is in fact a result of this naturalism taken to the Nth degree. And I know it's devisive, so I similarly won't bang on about how much I like it. But in terms of terms, I can't think how else one would describe it.

p.s. Loved your work on Porgy and Bess...

Have I been wtaching too much Buffy recently or does the picture of Sinead Matthes at the bottom of your post make her loot alot like SMG?

"naturalistic lighting is lighting that doesn't draw attention to itself" - well that is semantic nonsense! Surely naturalistic lighting is lighting that is or imitates natural light, and from where i was sitting the production seemed to be lit using the warehouse lights that were part of the set, rather than theatre lights. The windows were blocked out on the set and you got an occasional bright shaft of outside light when the door opened. You might not have spent much time inside warehouses but it looked pretty naturalistic to me! The costumes made sense to me because they said they were at a party/ball when the greeks got out of their wooden horse and started killing them all.

In what sense was the revival of "Attempts on her Life" the most IMPORTANT theatrical event of the year ? Surely you meant SELF-IMPORTANT ?

TW, ok, let's take my subjectivity as a given. It was - for me - the most important theatrical event of the year. Primarily because it demonstrated a very real willingness by the artistic directorship of the National Theatre to put money, time, and space toward producing geniuely exciting, innovative, experimental work.

I didn't find it self important (obviously). And I don't believe for a moment that it set out to be so. Yes, it made some bold choices, and necessarily stood by them, but I honestly don't think any of its choices were made in a high-handed way.

Who is this TW guy? And why is he making snide comments without backing them up with, you know, argument?

I have no idea. But, to be fair, he/she is asking questions, which, strictly speaking, don't really need to be backed up with anything more than a desire for an answer.

Great review. I'm with you on the lighting and Mitchell's naturalism in general (like the servants interrupting in The Seagull, and actors backs turned to the audience at times). Though I also have a great sense of theatricality in her work too, it is an often compelling mix.

I found Women of Troy very moving indeed, and I can be a great fan of KM's work. But AOHL, despite some good moments and interesting ideas, just didn't do it for me (it was almost trying too hard). I find it interesting that such divergent views can be found on KM in any and every possible variation.