[or: the honeymoon’s back on] 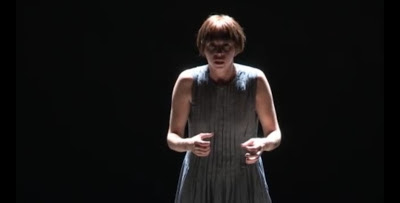 Essentially, Sand is a monologue or (spoiler alert) a pair of monologues. And it feels bloody silly reviewing (much less spoiler-alerting) something that you can as easily watch on YouTube. It totally removes the primary function of theatre criticism: reportage. So, look, why not watch it first and then we can have a chat about it:

But then, saying what happens and so on isn’t the only point of a theatre review.

It begins in 1942 with the Nazis exploding an atomic bomb over Newcastle. It then hops backwards and forwards in time up to the present day and back again, and many points in between. It does not become more explain-y or conclusive. Instead it plays with our uncertainty and uses precisely this to operate.

One of the narratives concerns a (woman?) working in a nuclear research facility who has suddenly been arrested by unnamed authorities. It echoes both accounts and the rhetoric of the adversities suffered by many nations seeking to equip themselves with nuclear armaments: Israel, Pakistan, Iran, North Korea. But if this is still the parallel universe in which Operation Sealion went ahead in 1942 – a parallel universe in which it was that Nazis and not the Americans who developed the atomic bomb (and Gill cleverly plays with this yet further, noting that 6 August, 1945 is the date America “invades” Japan, not the date of Hiroshima/Nagasaki) – then this persecuted scientist suddenly stops being some nameless Iranian of whom the even the moderate British media would have us be terrified, her insurgency might suddenly be British anti-Nazi resistance. Or perhaps, even Irish resistance to the Nazi German Empire. Similarly, the descriptions of the effects of what a nuclear bomb going off means for the people underneath are urgent and unsentimental. They also recall the horrors that the British and Americans recently visited on Fallujah. Since, despite avoiding sentiment, they are not impersonal statistics. They describe the human horror and cost. Facts delivered as assurances in her presentation: “The heat from the blast, however, should be sufficient to fuse the ground beneath to glass. To a depth of three metres” take a beat to process in relation to what that means in human terms.

“And the world turns” comes the refrain. Recalling Kurt Vonnegut’s similar use of “so it goes” in Slaughterhouse Five. But also the global/universal perspective of the Tienanmen Square segments of Chris Thorpe’s forthcoming There Has Possibly Been an Incident (“And so, Universe, you neglectful fucking parent, here we all are, silent. The stilled tanks with their operators inside. The crowd, sweating in the sun...”).

Actually, as writing, a lot of Sand did remind me of Chris Thorpe (I intend this as a compliment to both parties), right up until, at the end, it began to remind me irresistibly of the poetry of Chris Goode. And Goode’s own performances of those poems, which seem to be as much about the fear of breakdown in language and communication as about complexity, texture and modernism. Here, in Sand, that breakdown is given a clear illustrative purpose rather than a more abstract one. That said, purpose or not, the final ten minutes or so of the piece, where the language breaks down irrecoverably is about as good a piece of writing-for-theatre as I can think of. Something about the tone and the precision makes it particularly chilling whilst being strangely beautiful.

But what of the production? Well, in this incarnation – as a one-off for the Surprise Theatre strand of Open Court – it would be unreasonable to expect a massive set and cast of thousands. But It has got Eileen Walsh directed by Vicky Featherstone. For younger readers, Eileen Walsh is basically... Well, put it this way: before there was Lucy Ellinson there was Eileen Walsh. Half of the original cast of Disco Pigs, a quarter of the original cast of Crave (also directed by Vicky Featherstone), and for my money, she’s better in Sand than either of these other two (no mean feat. Although I was probably a bit young to appreciate the original production of Crave. And, having only ever read about Sarah Kane from Blasted, spent most of the time worrying that something really horrible was about to happen and not really concentrating on the play itself). But, yes, this is subtle, clever, nuanced, textured. Featherstone and Walsh have absolutely nailed the rhythm and tone of the piece to the extent that – having now watched it a couple of times – I struggle to imagine it being done any other way. I think Walsh hits the pauses, the hesitations and breaths of Gill’s text absolutely dead on.

Of course, I say, I can’t imagine it done differently, but in truth I’m torn. One of the most frequently repeated comments following the performance of Sand was the expression of hope that it would have a longer life after this initial Open Court season passed. I agree, and it’s hard to fault the present production. Of course, it could be performed on more of a stage. In theory, there’s no reason why the second voice need be recorded. I even suggested to Nike that if they were worried about the length, I’d have happily watched it a second time through straight away, so he could have pulled that Beckett trick of “repeat Sand”. And I like this production’s simplicity.

On the other hand, monologues of this quality (see also: Chris Thorpe’s meditative socio-political epics for solo voice) always make me think of the texts-for-theatre that Elfriede Jelinek writes, which, on paper, also look like they’re monologues. And it makes me think of the diverse ways in which these pieces get staged.

And I kind of want to say: if you do Sand again, maybe try doing it a different way. There was nothing wrong – literally *nothing at all* wrong – with this production, but it’d be astonishing if we starting seeing monologues produced as, well, for want of a better work “visual theatre”. For example:

A long time ago, before this blog started, I think – or around the same time – I was still kind of up-in-the-air about whether to pursue literary management or theatre criticism as a career. I’d been writing reviews of plays since 1997, but that’s partly just having opinions on plays, right? That’s kind of just saying: “wouldn’t it be better if...?”; “What are you really trying to say here?” Except in literary management, you get to say that before the thing hits the stage and makes you cross for an evening. Right? (Possibly not right, but bear with me here.) About the furthest I got along this “career” path was a chat with Neil McPherson about the job of Literary Manager for the Finborough. It became clear pretty quickly to both of us that, while there was plenty of mutual respect knocking about, we were pretty much chalk and cheese when it came to taste-in-plays and styles of production.

One of the things I’d been asked to do was to was suggest a play I’d like to see produced. The play I immediately suggested was Nick Gill’s play Heaven. Heaven still hasn’t been produced. Someone should. I still think it is a remarkable play (although I’ve no doubt that Nick now considers it an embarrassing bit of juvenilia). The character names were: A Sense Of Falling, Glass Darkly, Holding In, Slip, This Too, and Vertigo. Scene breaks with suggestions like: “// satellites fall, unnoticed, into the ocean //” and “// underground rivers through lisbon finally erode the city’s foundations //” (shades of Pornography, non?) It has a scene described thus:

What was remarkable about Nick’s writing was its precision, its musicality. But there was also a steeliness about it. A ruthless exactitude in the way that he pinned down the language of Englishness. Of Officialdom. Of the ruling class. Of excuse-making. At his best, Nick Gill – the writer of fiction – was the closest thing British theatre has to the Orwell who wrote Nineteen Eighty-Four, but also one of the freshest "experimental" voices we had.

I might have first met Nick through his involvement with The Apathists. I’ve written about them before. Possibly too many times before. But, for my money, this short-lived gang-of-six did as much to alter the possible face of British playwriting as Simon Stephens’s tutorship of the Royal Court Young Writers’ Programme and Dominic Cooke taking over at the Court put together. That the Apathists first, most obvious success was Mike Bartlett, and their most recent recognition (prior to Sand) comes in the late-to-London recognition of Duncan Macmillan’s massive talent with Lungs, kind of demonstrates what I’m talking about. That Nick Gill was the last of the group to have a professional début (with arguably a quite conservative production of his most conservative play, Mirror Teeth, in 2011) says much more about British theatre than it does about Nick’s writing. Back in 2008 I described Nick as an “uncompromising playwright”, and I think that is actually true. I mean, Nick’s not stupid. He could write a kitchen sink drama that would leave the audience in pieces, I reckon. The fact that he has no interest in doing so is why I think he’s such a hero.

Another reason Nick hasn’t got on as fast as I think he should have done as a writer, might be because he’s also such a sodding prolific musician. One of the earliest things on this blog (back when it/I did all sorts of stuff) is a review of a gig by his band The Monroe Transfer. And indeed, theoretically, the first time I came across Nick Gill in any form was when he did the music/soundscape for Lucy Foster (now of Improbable)’s production of Crave at NSDF‘02 (that play again).

Anyway, this kept happening. We kept on bumping into each other. He also – quite by coincidence – ended up doing the background sound/music for a number of Katharina Schmitt’s plays, so we wound up hanging out in Berlin too.

Oh, and then he did the music for my production of Hamletmaschine at All Change in April.

I think that’s full disclosure now. So, that’s me and Nick. I think he’s a bloody hero and one of the most important talents we’ve yet to properly discover.