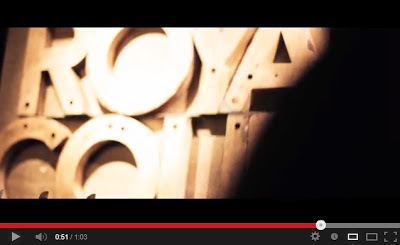 In May 2007, when Dominic Cooke took over the Royal Court, my review of That Face by Polly Stenham – opened thus:

“An early indicator of what we might be able to expect from Dominic Cooke’s new regime as artistic director of the Royal Court can be found downstairs in the theatre’s stylish concrete basement bar. Here, nestling comfortably on the shelves that until recently housed the theatre’s now-relocated bookshop, are organic teas and wine, fine dried pasta and lemons. It is unclear whether these are for sale, a knowing nod to Cooke’s much discussed promise that the theatre was going to start doing more plays for the middle classes, or simply a scene-setting installation for the Court’s new Upstairs production of 20-year-old Polly Stenham’s first play That Face, concerning the miserable lives of an upper-middle-class family...”

This historical detail is interesting to recall in the wake of Vicki Featherstone’s Royal Court takeover.

The first issue of “Surprise Theatre” (Mon 10 June ‘13) was Mark Ravenhill’s Cakes and Finance – a stand-up verbatim piece/lecture (a surprising, excellent new genre) in which he “played” ten playwrights/writers-for-theatre talking about their “Ideal Theatre”.

It is clear that Featherstone – despite (or perhaps because of) coming from the buildingless National Theatre of Scotland, and before that, the excellent touring outfit Paines Plough – has given that fact of the Royal Court’s physical form a good deal of thought.

For the first time since its 2000 post-refurb opening, the downstairs bar has – thanks to designer Chloe Lamford – been given a burst of colour. Along what was the tastefully black-gauzed far wall there are now three massive panels picturing a high green hedge and above it blue sky. Yellow and Orange lanterns now hang over colourful canteen style tables. And greeting you as you enter via the still-imposing concrete steps is a large magnetised blackboard with those colourful fridge-magnet letters spelling out this week’s “found play” – this week, an overheard conversation between a little girl and her grandmother.

In short, the Royal Court bar has been de-poshed.

The menu has also been brought a bit closer to the means of those who actually work in theatre, with a selection of burgers hovering around the £6 mark. Chips are down by a quid and there’s a 20%-off happy hour after the show comes down between ten and eleven.

This is all excellent news.

Looking round on the second night of Surprise Theatre it already looks like a younger, non-Sloanie crowd have discovered these facts for themselves, and are gratefully making themselves at home. As Royal Court revolutions go, this one strikes me as much better than a misanthropic howl from an angry young man destined to turn almost immediately into an embarrassing old bigot.

“Affordable chips at the Royal Court? We never thought we’d see the day,” people will tell their grandchildren. And the ethos, too, and the work...

I admit, not least in my introductory chapter to Modern British Playwriting: 2000-2009, when Dominic Cooke took over from Ian Rickson, I was a bit seduced by the rhetoric. Talking to Ramin Gray for the book, he suggested: ‘When Dominic came in he did basically what Graham [Whybrow] had been saying for years and years, which was “programme the thing actively, bring in some exciting voices from outside to goad on English writers, and put on a blast of English writers who no one had ever heard of”. I mean, there was a lot of stuff that had built up on the Young Writers’ Programme and Dominic brilliantly... I mean, it was all there in the larder, Dominic just unleashed it.’

But that initial blast of fresh air felt like it transformed into something else around 2010. What started as a provocative new direction quickly calcified into a difficult middle-class-narcissist agenda, where moneyed audiences were shown repeated, increasingly flattering portraits of themselves, many of which were plainly invented with an eye on a West End Transfer.

As such, who could have predicted that the Court was going to re-open with a verbatim lecture and a week-long run of a really niche satire of Georgian politics? That The President Has Come To See You isn’t perhaps the best new play that’s been seen in Britain this year hardly matters alongside the fact of the gesture it represents.

That it’s performed by an ensemble of some of the best actors in Britain, who are learning/rehearsing a new show every week by day and then performing last week’s rehearsed show by night gives the entire building a new energy that it has been utterly lacking since before 2010. Yes, at some point, it will be nice if we don’t have to be thoroughly acquainted with the ins and outs of some really abstruse politics in order to really appreciate the plays. But, really, for now, especially in the light of what seems to be going on elsewhere, it just feels bloody great to have the Royal Court back on our side.

[cover image from here]
Posted by Andrew Haydon at 18:08