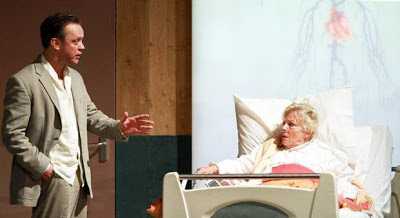 Following on from last week’s bonkers Georgian offering, The President Has Come To See You, this week’s Open Court offering is the infinitely *straighter* Death Tax, an American play by Lucas Hnath.

While lacking the freewheeling energy of Featherstone’s production, John Tiffany brings a remarkable degree of precision to bear on a production which has had only a week’s rehearsal. So much so, that it’s impossible not to admire both cast and director for this tight, snappy, focussed production. In fact, it makes you wonder what other “straight” productions of plays spend the other three weeks of their usual allotted rehearsal time doing.

On the other hand, it is a shame that the most exciting moments in the staging come from Chloe Lamford’s wooden box being opened again – differently to how it opened in The President... – and the first few moments of the actors moving around on it; the strip-lights moving up and down; and Natasha Gordon announcing “This is a play with five scenes. This is scene one...” At that point, anything could have been about to happen, and it all felt excitingly, well, Brechtian. Granted, Lamford’s box had opened to reveal a pretty convincing hospital bed, and in it, a pretty convincing-looking patient (Maxine, played by Anna Calder-Marshall), what with real tubes up her nose, and a bleepy machine to one side, but, still, that might be an elaborate ruse. Sadly, it isn’t.

You know those Playwriting courses that they have? Ones which teach about characters wanting something, and about giving characters backgrounds, and obstacles to getting the things they want, and about conflict, and about illuminating the world through these interpersonal conflicts? In many ways, Death Tax is almost a perfect illustration of what I imagine will come out of these courses. (I should state that I’ve got no idea if Hnath’s ever been on one, or whether he’s just read Oleanna until he’s absorbed more-or-less everything you could learn about playwriting from it.)

That said, Death Tax is still actually frustrating on precisely these terms, rather on any doctrinal concerns about naturalism versus bonkers or whatever the battle-lines are these days. It’s frustrating because it starts in one place, with one specific conflict, and – after way too long setting it up – it’s a good starting point – dying woman Maxine is concerned that her vile daughter is paying her nurse, Tina (Natasha Gordon) to have her killed off before tax laws change on 1 January and the daughter’s inheritance shrinks. Leaving a little ambiguity as to whether this charge is true or not, the nurse eventually claims that the mother is right, and allows the mother to bribe her to keep her alive.

Scene two: Tina is confronted by her line-manager Todd (Sam Troughton) about receiving cheques from Maxine. To complicate this scene, Todd is in love with Tina (everyone wants something from someone else). Tina is not in love with Todd, but needs the money to get her son back from her ex-husband in Haiti. To be fair, for all that laid out cold like this it sounds contrived, Gordon and Troughton, playing with utter conviction, manage to make the situation work.

Scene three: Maxine’s daughter (no name, called “Daughter” in credits) turns up to see her mother. Now – having achieved the set-up, and then established a secondary struggle which explores themes of migrant work and power-relationships – if not along gender lines, then certainly gendered here by virtue of the fact that Todd is a man in love with Tina, a women who works under him – we get a twist. The twist is, although the mother won’t see Daughter, Daughter has a couple of reasonable things to say. She was never trying to have her mother killed (at least, that’s the impression I got). She (also) has a son. She (also) has no money. She also has a mother who she claims has treated her as if she were “evil” her entire life.
(I was briefly reminded of the definition of child abuse in Bruce Norris’s The Pain and the Itch:


Kelly: It was straight out of Alice Miller. Neglect alternating with sarcasm.
Carol: (relieved) Ohhh! Oh, I see. Oh, I though… oh, pfffft.
Cash: Oh, God. Not sarcasm.

And I never really wanted to be reminded of anything in The Pain and the Itch, ever again.)

She also knows that Tina is receiving money from Maxine. The daughter doesn’t acquit herself especially well either, but does then leave having made a rather spectacular gesture: of having cut herself out of her mother’s will. She leaves Tina with a notarized letter to this effect and fucks off.

Scene four: Tina confronts Todd with the letter. They are now in cahoots, he having agreed to cover for her and to help out with keeping Maxine alive (currently at his personal expense), until they can get the money and split it fifty-fifty. He now holds this over her, but is really hanging on to the hope that she will love him. The letter throws another cat among the pigeons. Tina wants to at least give it to the mother after they’ve got the money. Todd wants it destroyed now for fear it’ll capsize their whole (criminal) enterprise full stop.

Scene five: FAST FORWARD TWENTY YEARS!! Sam Troughton is now playing Charley, Maxine’s grandson. Gordon is now Candice, a social worker. Daughter is nowhere to be seen. Maxine is still in the same bed, still alive. “Everytime I got worse, they invented a new machine to make me better/keep me alive” she says (I paraphrase. No freebie script, alas).

This final part suddenly up ends all the previous drama into a bit of a cipher-led debate about the right to medical care (remember, this is set in America, and therefore all the care Maxine has had thus far has had to have been paid for by her). Maxine is now cleaned out of money and is therefore going to have to go into free/state care, which, as she puts it, won’t keep her alive.

We’re never told Maxine’s age, so we can’t guess what’s really at stake here, but it seems likely that she’s been extended from dying at, say, 85 to, now, 105. Yes, the play raises questions about “the value of life?” and “how old is too old?” and “can there be a ‘too old’ if medical science can keep a person alive?” And, yes, I suppose, with an ageing population and with the increasing erosion of free healthcare, even in this country (is the USA’s horrific third-world solution, now just an inevitable endgame for British National Health?), these are indeed pertinent questions.

Perhaps my main problems with the play, however, are its ways and means. For a start, each scene is just too long. Hnath writes well, but what he writes is characters who just won’t shut up. There’s no point made here once if it can be reiterated several times in a five minute monologue. The characters speak a kind of ticcy, Mamet-led dialogue, which, while stylish, is also kind of hellish to listen to after a while. For a play about the economy, it could learn a lot about economy.

Then there’s the kind of short-circuiting of each drama. Given how much time is given over to each scene, you kind of end up wanting each thread to be picked up and developed in a satisfying way. Yes, of course, there’s always an argument to be made for subverting or frustrating an audience’s expectations. But that doesn’t mean it’s not still bloody irritating. And the five second pay-off of the whole first four scenes as reported incident (a reported incident which sticks out like a sore thumb) in scene five, is a particular low point.

It’s not that I think this is a “bad play”, but it feels like it’s an accomplished first draft, and one which could do with the existing scenes cutting down to their bare bones, and then several new scenes being added to properly explore what has actually been set up.

It also constitutes another example of the “start-in-the-wrong-place argument” play. By which I mean, it takes one objectionable position and then sets it against a different, opposite objectionable position, and then makes out that these are the only options. All the problems in this play could be solved by higher taxes and proper state-run healthcare (not to mention people being less greedy, and by the state not making the bottom line unsurvivable). And no one is going to convince me that ignoring these facts makes for better drama.

But whaddaiknow? I hate reviews where critics effectively script-edit post-fact. Still, as I think I’ve said before, I think there’s kind of a point if you can say what you would rather have happened, you’re giving a basic idea of why what did happen didn’t completely work for you. Right?

And I haven’t once demanded more bonkers staging or more social context, ok?

So, in conclusion: still hugely impressive work by Tiffany and his cast. Not my favourite play. And, I wonder if the thing that the other few weeks of a rehearsal process are the bits where character is explored in more depth – which might have led to altogether different Maxines and Daughters than the ones here.

Another thought, I wonder if, rather than making sure a thing looks polished by opening night, it would be more interesting if remaining Open Court Ensemble pieces allowed the polishing stage to be substituted for more investigation and leaving the lack-of-polish exposed as a badge of pride. It’s a risk, sure, but what’s this season for if not risk? On a different set, Death Tax could have been a part of the Cooke regime, circa Now or Later. and that’s not such a cheering thought.
Posted by Andrew Haydon at 18:32