A Cure for Ageing – Ira Brand

I first saw Ira Brand’s A Cure For Ageing as a half hour scratch performance at Forest Fringe at The Gate last year. Since it is still partly in development, and Brand hasn’t been inviting journalists to write about it, as such, it feels more appropriate to update that report than to knock out a whole new review before re-seeing the finished product in Edinburgh. If you’re after a “star-rating”, take the fact that I’m perfectly happy to go and see it for a third time as indicative.

Since its last outing, it’s lost the section in which she either shows or describes a video of someone naked talking about their body and its signs of ageing. More touchingly, it’s gained another email from her mother about her grandfather’s health. Briefly, there’s also a section where Brand now carefully tips two buckets of earth onto the stage and unfussily creates a makeshift grave. She plays a tape of her grandmother speaking (in German) about her love of dancing. And she then dances on the “grave”. It’s all so not-flagged-up that this could be purely my interpretation. At no point does she say “This is a grave. This is me dancing on a grave”. It’s a curious juxtaposition, though, since the expression “to dance on someones grave” – most recently trotted out with unsurprisingly regularity after Mrs Thatcher’s death – is generally taken as a celebration of that person’s death, not of their life. Here it feels more mournful and elegiac.

As I say, the piece is still “in progress”, but even while it’s being tidied up, it’s well worth a look, especially if you’re not going to be around in Edinburgh to see the “final” version (if such shows can ever be said to have “final versions”).

When people have asked me what I did last night [7.06.13], after briefly describing A Cure For Ageing, I then had to try to find ways of explaining Fox Solo.

What Fox Solo is is a woman dressed as a fox – including full face make-up; half orange, half white – lip-synching with a tape of her (old, very posh) grandmother talking about love and some pop songs. It’s performed as a duet with one of those nodding dogs. Early on, for example, they both mime along to Sonny and Cher’s I Got You, Babe. Foxy does the Cher part and the nodding dog, well, s/he nods along to Sonny’s part. Given that Foxy is miming anyway, the effect of the model dog next to the unplugged mic is uncanny and very funny. There’s something oddly suggestive of transvestism and cabaret about the performance as a whole. At the same time, the piece is actually more gentle than out-and-out subversive. As the piece progresses [spoiler alert, if such performances can be spoilered], Foxy sets her nodding dog companion adrift on a heart shaped raft in the middle of a transparent container holding eight pints of milk and some red food dye. The little creature sits in the middle of this pink pond until, as their love affair gradually seems to die, Foxy tips up the container spilling pink milk and dog onto the stage. And then leaves. Fin.

It’s completely bewildering. I have literally no idea what to do with it at all. I enjoyed watching it, even though I wouldn’t have predicted vaguely transvestive, animal-play, lip-synch, cabaret was my bag at all. I’m not at all sure my critical faculties are up to it. I mean, it’s well done. Definitely. Foxy (no other performer credit given) is obviously a talented performer, but it’s so idiosyncratic – so opaque as to either function (pfft) or meaning (who wants transparent meanings anyway?) that, rarely for performance art, you really do have no idea what’s going on: what it’s really about. Maybe that’s the point. Maybe it is just a woman dressed as a fox lip-synching to the voice of their grandmother talking about love and some pop songs.

Interestingly, you do still get a palpable sense of the loss one feels when love dies. It’s not manipulative – not aimed at jerking your tears from you. In fact, for all its outward-facing-ness, it’s probably quite an inward-looking little piece. For all Foxy’s wide-eyed smiles to the audience, it feels like this could be more theraputic for the character than her observers. I tell you something else: it feels more than a little ridiculous trying to analyse this. Still, if you want to go and see something that is pretty much guaranteed to be unlike anything you’ve seen before, then this is a good bet. It seems to be performed with total sincerity and produced in good faith (also rare). And it more or less entirely defies reason.

One of the strangest things I’ve ever seen. Worth going to see if you ever get the chance... 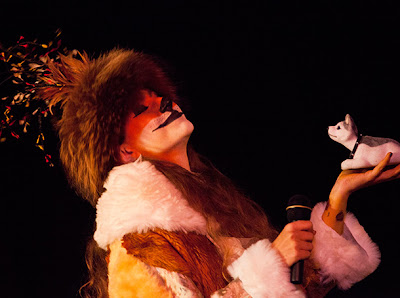