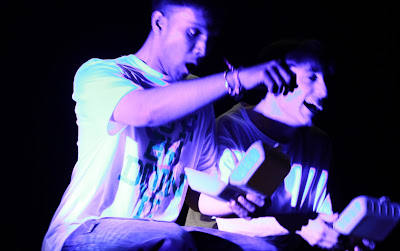 Who’d have guessed that one of the things the Open Court season would achieve was the rehabilitation of the naturalistic, gritty, urban, social realist drama?

Long-term readers of this blog may have picked up the faint impression over the years that I was implacably opposed to this school of playwriting. It’s not true, of course. I’m still impressed by the best examples (Roy Williams’s Fallout, SS’s Herons, etc.), at least as texts (as it happens, I didn’t see either production in those cases).

But I think many of the reasons I did like Carrie Cracknell’s production of Suhayla El-Bushra’s new hour-long play Pigeons so much are actually entirely consistent with some of the things I’ve been worrying and grumbling about for years.

The basic story of the play in a nutshell is that Amir (Nav Sidhu) and Ashley (Ryan Sampson) – a pair of Asian (Pakistani?) and English schoolboys who fall out – mostly over a girl – and retreat into the more dogmatic ends of the belief spectrums that their respective cultures have to offer (i.e. Amir embraces Islam and Ashley goes all EDL).

The reason I didn’t mind this – and on paper the outline does sound exactly like the Royal Court Racism-is-bad Play™ – is that El-Bushra’s structure largely mitigates the possible clunkingness of the potential “message”. Rather than following the standard beginning-to-end chronology, the play begins at the end, and then rewinds in a series of jumps to explore why everything had gone wrong.

Actually, the one thing I could have lived without was the EDL bit. Or rather, while the character of Carl (Ferdy Roberts) is a surprisingly well-written/realised example of his type he is still such a familiar trope that you kind of want to see what would happen to the play if he wasn’t there. After all, friends of different ethnic backgrounds fall out all the time. There isn’t an EDL recruiting officer sitting on every corner waiting to snap all the white ones up. The EDL are a lunatic fringe of the English psyche, and the less we imagine most people are ever going to sign up for their hardcore thuggery and racist marches, the more balanced a picture we will have of the UK. (Yes, I’m aware that it’d be foolish to ignore them, but on the other hand, most of their propaganda is the credence and fear they are accorded by mainstream media outlets and, I guess, by dramas like this.)

[spoiler-ish paragraph] However, because of the structure here, there seems to be an interesting get-out clause (although I’m still in two minds as to whether I’d take it, because the play *as is* does have some lovely moments that this option would sacrifice) The structure is telegraphed by some graffiti which says “shit that went wrong”, then for the second act “wrong” is replaced by “right”, and then at the end, “right” is also deleted and replaced by “wrong” again. One possible version of the play would end at the end of “right”, with the two boys somehow reversing a history that had yet to happen, and the play leaving them as the dance topless and pilled out of their little boxes on top of a stolen car together.

Because of this structure, the momentum doesn’t feel so relentless, heavy or (most importantly) inevitable. The jumps in time give an impression of choices and let air into something that could – played chronologically – feel as if it were unstoppable.

However, the plot is sort of the least interesting aspect of either the play or the production. What’s much more exciting here is El-Bushra’s incredibly funny script, and her (as far as I can tell) dead-on ear for the neologisms and rhythms of Amir, Ashley and Leah’s teenage speak. What’s also gorgeous is the relationship she makes for the two boys. In fact, I think I could have pretty happily watched plotless hours of them just pissing about chatting shit. (and conversely, my least favourite moments were those that were most on-the-nose or exposition-y).

Which leads to the next Excellent Thing about this production, which is Ryan Sampson’s tour-de-force performance as Ashley. What’s particularly brilliant about it is How Much Acting he is doing. This sounds like a criticism. It isn’t. There’s something incredibly satisfying about seeing someone who hasn’t just been parachuted into a role because a casting director thinks they are basically exactly the person they’re meant to be playing. Sampson pins down a whole other accent, age and physicality with seamless perfection. Seriously. Pigeons is worth seeing for this performance alone. (And everyone else in it is also excellent.)

Another Excellent Thing is that, thanks to Chloe Lamford’s box (the versatile set which just keeps on giving), the production doesn’t look anything like the usual way that this sort of play is staged. That also helps to prevent it sliding into the mire where these things usually end up. I think this is related to the sense of agency and imagination in the script and in the casting. Just the sheer fact that none of what’s on stage, either actors, or text, or setting feels like a signed, sealed and delivered done deal stops the piece as a whole feeling like it presents a forgone conclusion. Which, thinking about it, is, I think, my real problem with British naturalism as it is usually presented. When pieces appear – almost as if bound like a doctoral thesis – then the way they operate seems to be to tell you (/us), the audience, that This Is How It Is. They seem to present inevitabilities. They feel like roadblocks rather than analytical tools, or openings into worlds, or an imagination of possibilities. Pigeons doesn’t. Pigeons, strangely, made me totally rethink my attitude to the possibilities of the “realist” social drama. Which isn’t bad work for an hour-long show rehearsed for only one week.

And yet another reason to be grateful to Open Court.

Which MUST become an annual thing, right? Right.

oh, and the atmosphere round the place is still extraordinary. It actually does feel like a Festival. God bless Open Court.
Posted by Andrew Haydon at 11:05