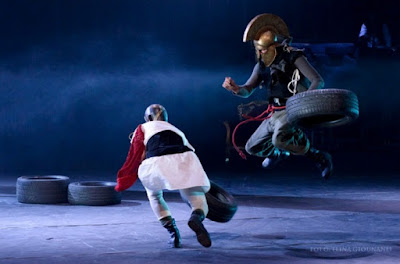 Thanks to a delayed flight, and the narrowest of hotel transfer windows, I missed the first half of this stage-version of Homer’s Iliad. And I was a bit hot and knackered [poor me, I know] for the second half (2 hours after the interval), so this *might* have impacted on my feelings for said show. That said...

Pretty much flat-out the most memorable production I saw abroad last year was the production of The Iliad made by Jernej Lorenci in Ljubljana. What’s interesting here (at least in the half I saw) is how much is nominally similar, and yet how much, much less I liked it.

Stathis Livathinos’s production also opts for a largely undressed stage – although here undressed apparently requires a large metal spiral staircase (á la, The [Berliner Ensemble] Suicide) and a huge amount of car tyres, strewn all over the place, also built into a kind of Walls of Troy thing towards the back. The aesthetic sometimes also sees the large ensemble seated on chairs in a semi-circle for a bit, like the Slovenian one. There’s even a passing similarity to the vests and trousers costumes, and to the use of one single Ancient Greek-style helmet. And both versions incorporate live music.

That’s pretty much where the similarities end. Nevertheless, it felt striking how much I took against this production. Was it the radio mics and shouting? Was it the horrible Cats-meets-Mad Max costumes (by way of Brecht and the RSC)? Was it just the shouting and a-bellowing? It might well have been the Epic lack of characterisation, and the apparent complete lack of of tonal feel for any of the words that were actually being said. (There were English surtitles, so I was at least within the ballpark of understanding...)

I mean, there’s definitely an argument that I know less about the Iliad than *some Greeks*. It’s their national heritage; they can do what they like with it, and if that’s Mad Cats, so be it. Nationalism is certainly one aspect of this production. In his production notes, the director pointedly says: “I consider language perhaps the toughest oil pipeline we have. It traverses the ages yet never seems depleted. The Greek language is the only thing that can’t be sold off or mortgaged.” And, yes, it’s difficult not to sympathise with anyone from a country being sold-off, piecemeal, by some forgone neoliberal conclusion reached in Brussels or Berlin.

Sadly, I’m just not convinced that this production made much of a case for itself, either at the level of national-culture, or simply as theatre. One hopes, for Greece’s sake, that this was a one-off. (Although, as usual, disclaimers apply; what do I know? Maybe it was really popular here in Hungary, and even more wildly so at home, and maybe I’m just the wrong person to have seen it.) 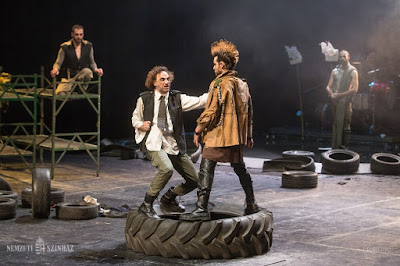 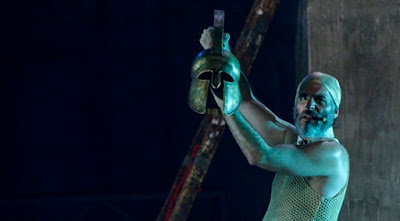