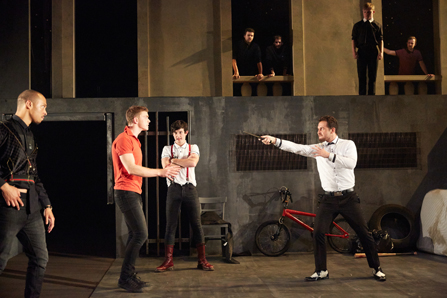 O, Manchester! O, HOME! How I have wronged you. When I reviewed your Romeo and Juliet, I thought it wasn’t all that good. I am so sorry. I was measuring you against some sort of Platonic ideal. I had expectations. Well, Cardiff has shown me the error of my ways. You didn’t even get close to how bad R&J can get. Sure, I took against your Romeo for seeming impulsive, vain, posh, and a bit hard to like. But, Christ! At least I listened to what he had to say. And, well, yeah, maybe I wasn't hugely enamoured of your concept, but, fuck! At least you had one.

Cardiff’s Sherman Theatre is regarded as a bit of a poisoned chalice in Welsh theatre circles. Essentially, the problem is, it had a large tranche of cash taken away in the last funding round. It has just been refurbed, with the old car park now hosting an art museum-y foyer lit like a downtown strip club, but incoming Artistic Director Rachel O’Riordan can only afford two home-grown productions a year. And both have to sell. A lot. On the evidence of last night, no matter how bad this R&J is, the tyranny of the National Curriculum set-text will ensure financial stability in the short term. However, it will also poison the well of future theatre audiences as surely as anthrax in the water supply. This is precisely the sort of production that made me believe as a teenager in Birmingham that theatre was a poor substitute for simply reading the play, or better still, just reading novels. Why subject yourself to hours in a darkness you can't leave while actors more wooden than the stage on which they stand speak the words of the text less convincingly than you can imagine them?

O’Riordan’s production is terrible. Jaw-droppingly, giggle-inducingly so. It sets a new Gold Standard for train-wreck theatre (although I avoid a lot of stinkers, so this could be a slightly unfair judgement. Still, it set me a new nadir for principal theatres in capital cities).

Why so bad? Well, let's tick off the pitifully few positives first. Kenny Miller’s set is actually pretty great. A massive concrete monolith. Impressive, layered, subtle, menacing. Like something out of a post-apocalyptic Marthaler show. I could have lived without the flown-out upper wall, revealing the Capulets’ bling colonnaded home (which didn’t make a lick of sense, but then neither did any of Ostermeier’s Volksfiend), but even that *worked*. And a couple of the cast were still managing to turn in watchable performances.

So what is the problem? Well, the entire thing is so godawful it really is genuinely difficult to know where to start.

We could start with the “concept”: the production is set in a kind of impressionist sink estate where cardboard cut-outs of Britain's underclasses make gang warfare against one another. Put another way: imagine the Little Britain R&J and you're pretty much there. Juliet’s nurse is, well, a “comedy Jamaican”. The messenger is a “comedy homosexual” with a Northern Irish accent (although, Tony Flynn doubles up as The Prince, who he seems to play as the Revd Iain Paisley). Yes, The Kidz tittered at these “comedy” characters yesterday in a way that would have felt racist and homophobic, *had they been dignified portrayals of human beings*. As it was, the kids were just responding to a lowest common denominator dogwhistle. They sounded almost embarrassed of their own laughter.

Up against this minstrelsy, was basically a Topshop/Topman advert, with parents pulled in from the worst Danny Dyer films about gangsters and their molls imaginable. In the initial fight scene, more or less an entire theatreful of adolescents fell apart when Lady Capulet walked on wearing a nightie apparently designed to illustrate that “brevity is the soul of lingerie”. Christ. It was like sitting in the middle of a teenage maelstrom. The boys, devastated; the girls, unsure whether to slut-shame, cheer, or re-route their whole sexuality. It's not often you see a single (dubious) costume choice do that to an audience.

Chris Gordon’s Romeo has much the same effect when he walked on. Not a dry seat in the house. What was instructive was the way that this effect lasted for all of about two lines once he opened his mouth. Turns out good looks are still no substitute for either charisma or an actual ability to act, in theatre. Christ knows what the director was thinking.

Elsewhere, and less specifically, one repeatedly finds one wanting to scream either WAKE THE FUCK UP or WHAT ARE YOU DOING? at the stage. Which isn't super. Sean O’Callaghan plays Romeo’s father with all the Snapelike-ness appropriate to an erstwhile Wrestling School actor. However, it turns out there are reasons you'll not have seen Alan Rickman ever playing an incomprehensible drunk Irish priest... Meanwile, the entire demeanour of Paul Rattray as old Capulet at the banquet, as he looked out over his colonnaded veranda, seemed to scream “I was in Black Watch less than a decade ago. What the fuck went wrong?”

When Romeo and Juliet turn up at the cell of the incoherent friar to get married, they have both inexplicably changed into red polo shirts and black jeans. “Why are they dressed like that?” I idly wondered to myself. “They’ve just come from their Saturday jobs in McDonald’s” my friend whispered. It scarcely mattered that I spent the next five minutes trying not to laugh, since the audience around us were mostly giggling away to themselves as absurdity piled into absurdity.

I can honestly say this was one of the most risible things I’ve ever seen in a theatre. Lacklustre beyond measure, stilted, and yet still self-aware enough to project wave after wave of shame from the stage into an already restive and uncomfortable audience. I can’t even begin to imagine what the school pupils made of it. Probably, having been told that Romeo and Juliet is a great work of literature, their options were either conclude that they dislike great literature, or conclude that it was they who were somehow at fault for not liking it.

Well, young people of Cardiff, I’m here to tell you [albeit somewhat belatedly, now], it wasn’t you. And it’s not Shakespeare. Theatre is an unstable medium, and it can fuck up the best of works. And this was about as fucked up as good plays get. Please consider giving the artform another try. Cheers.

[Lyn Gardner saw it the same night as me and found it in her heart to give the wretched thing two stars...

Somehow The Stage gave it three, but most of the bits where their reviewer says something was good, it wasn’t.]