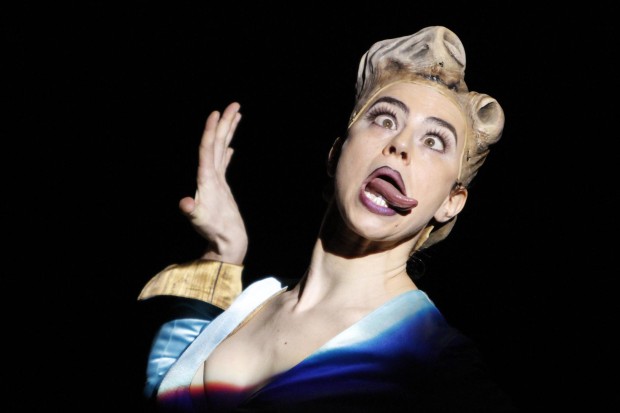 Once in a while I guess it’s healthy for me to see something in Germany that I absolutely loathe. And obviously fate had decided that the effects of Don Giovani. Letzte Party and the Deutsches Theater’s catastrophic German language première of In der Republik des Glücks last year were wearing off and I needed a top-up.

Herbert Fritsch, who is also responsible for last year’s Theatertreffen show Murmel Murmel – which I had previously been quite keen to see – has this year made a wholly original show from scratch. (Yes, sure, when the only “text” for last year’s performance is an art text where the word “murmel” (marble) is repeated a number of times, there’s not much distinction, but...).

He’s called what he’s made “an opera”. And in the sense that an episode of Teletubbies *could* be called “an opera”, he’s absolutely right. No, that’s not quite accurate. It starts off a bit more like a slapstick pastiche of, well, possibly of something. Plastic be-wigged and heavily made-up glittery musicians enter the pit and make as if to start. There’s some pissing about with a piano stool, then a lot of earnest-seeming squeaking, honking, and banging. Worryingly, it’s not not reminiscent of Helmut Lachenmann’s Das Mädchen mit den Schwefelhölzern (The Little Match Girl). After this silly intro, the “orchestra” skip off to reappear as the on-stage cast in new, equally hideous costumes.

For possibly up to the first half hour I entertained the possibility that this could be the most elaborate, sustained and savage satire of Robert Wilson outside his own work. Gradually, as the thing turned into a series of solo-pieces, cameos and gurning – all performed to grim Latin lounge music accompaniment – this possibility looked increasingly unlikely. (Is it even worth mentioning that Ruth Rosenfeld (above) could out-Miley Cyrus Miley Cyrus in the sticking-her-tongue-out stakes? No.)

The programme of Theatertreffen describes the show thus:

“A squeaky wooden tone throws the orchestra and its conductor Ingo Günther for a loop. But then they start making their sounds, with crinkled-up cellophane, electric guitars, percussion, recorders or a triangle. They tinkle, clunk, cha-cha and rattle. A 1950s saloon orchestra, decked up as for a revue. The twelve performers are lounging on a settee – this thing from another (art) planet. They are resilient and refractory, like their inventor Herbert Fritsch. The only prop is this couch of so much more than human scale. The fidgeting creatures are sitting on it, hanging from it, stuck to it, they push off from it or crack their skulls on it. Fritsch, son of nonsense and primal creator of chaos, offspring of Chaplin, Valentin and Vaudeville, deploys his actors like mechanical bodies. This is captivatingly puzzled out, organized and staged: Nonsense, yes, but certainly not stupid. These children of buffoonery are certainly no conformists; they are original sex maniacs and players, driven by the directions of the music and of Fritsch, this worker of theatre-miracles.”

Which will do, except for the way it fails to note that it is the most knuckle-whiteningly irritating thing in the universe.

I’ll concede that is purely a matter of taste. A lot of people round me (German people, the traitors) were chuckling and guffawing happily away. God knows what at or why. The feeling that it was a satire or pastiche of something never quite fully evaporates. But it seems mostly to be a postmodern defence – a parody of itself. A half-assed refusal to commit even to its own paltry “fun”.

In conclusion: a slightly executed 90 minutes of mugging-without-conviction to dreadful music.

Except that this was somehow deemed better by someone somewhere than Alles Weitere...

TBH, if it didn’t feel necessary to demonstrate that sometimes I have a really strong reaction against stuff here as well as sometimes loving it I think I’d have happily forgotten I ever saw it within about five minutes of having seen it. That said, we did find a bar within ten minutes stroll of the theatre selling two glasses of red wine for €3.60 (cheapest round *ever*?), and which gave us all (a group of four) some rather nice veggie curry. For free. So Berlin pretty much redeemed itself immediately. Still, odd piece. I guess I should take the advice of that bloke in the Guardian and try to understand it better, except there didn’t seem to be anything to understand. Just a sense of humour you either have or don’t have, I guess.

I might have a read round some reviews and try to fathom what the hell anyone else saw in it before the end of the weekend, but I don’t hold out much hope.
Posted by Andrew Haydon at 17:15