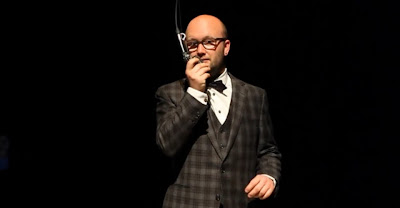 A strong company identity can be a blessing and a curse. Drop the name of Belgian provocateurs Ontroerend Goed into a conversation and these days the reaction is likely to be a weary rolling of the eyes. There’s a feeling now, isn’t there, that they’re a bit hit and miss, non? Added to which, maybe we’re all a bit tired of being relentlessly trolled by our Flemish friends.

All of this makes it important to report that Fight Night is actually a pretty good show. Sure, it still works in classic O.G. style: provocative jokes, playing with audience discomfort and capacity for self-disgust, and banking heavily on the performers’ dubious charms. They might even be trading on audiences’ unease and irritation carried over from their previous shows. Or perhaps I was just feeling irritable when it started.

Fight Night is a show about voting. Or rather, it’s an interactive popularity contest. And [*anti*-spoiler alert], that’s pretty much the full extent of it. You are issued with a little electronic voting pad at the beginning. Using it to cast your votes (should you so wish) is the full extent to which you’re going to be co-opted in “audience participation”, unless you also wish to vote with your feet and actually walk out. But there’s no zooming a video camera between your legs, no sudden revelations of everything you’ve told someone in confidence, no people describing a hidden video camera’ed you. You’re just a dumb statistic. A more or less entirely inaudible voter.

And this is where Fight Night gets interesting...

Now, I reckon FN is only really going to be usefully discussed if it’s spoilered to death, so consider the above “The Review”. I think it’s pretty good. I think it’s a successful bit of work. It makes its point well, and though you’ll find it irritating for a good while, I’d urge you to stick with it, because I think it ends up saying/showing something quite important. (Four stars, in Edinburgh-speak)

[FROM NOW ON: HERE BE SPOILERS]

[so, to reiterate, read on only if you’ve seen, aren’t going to see, or don’t mind seeing when you know what happens]

Part of the reason there’s a point in describing what happens in the version of Fight Night I saw yester-yesterday (2 August’s press performance – so the same one being reviewed by Lyn Gardner, Fiona Mountford, Ian Shuttleworth, Joyce Macmillan, et al) is that, on the face of it, the outcome of the show will differ day on day, depending how you and your fellow audience members vote.

It opens with five contestants randomly picking a numbered card. Urged on by our laconic, bearded MC, we immediately have to vote for which one we like most – based on nothing more than just looking at them. Two women, three blokes (on the day I saw it – no idea if there are multiple cast combinations possible). The scores are revealed. Then they’re allowed to tell us a wee bit about themselves before we have another vote, our opinions now modified by what we thought of what they had to say.

[oh, and before or after this, we’re asked to “fill in” various survey type questions about ourselves. Age. Sex. Income... Sort of stuff]

What they had to say was generally pretty ugly. They’re all a bit needy, a bit vain, a bit conceited; needlessly (and somewhat hopefully) sexualising their possible charms, putting crude spins on wonky psychology.

We vote for the least worst and then look at the new scores.

Of course, there are already two possible unreliable narrators here, alongside our lugubrious host. On one hand, our votes might literally change nothing. The show might not be interactive at all. They might have a powerpoint presentation of fixed results and since there are no independent UN monitors watching these elections we have no idea whether our ballots are being counted or not. [having now talked to Dan Hutton who saw a subsequent show, I think we’ve established that the numbers are at least different in every show, so I think we can assume that the voting element is real]

The other unreliable narrators are our fellow audience members. They could be up to anything. Voting exactly as they feel. Voting for effect. Voting to make the show more interesting according to how they see the clashes of personalities. Voting for the precise reverse of what they think. In short, I’m not sure you’re going to learn much about ‘what people think’ from Fight Night.  I think I did most of the above on one round or other. I nearly claimed I was a woman. I almost certainly overstated my income.

After the next voting round, having established who the least popular candidate is (on 2 Aug 20-year-old “”) the most popular candidate (unaccountably, 29-year-old “”) declares the possibility of coalition. Part of me thought – well, this is all well and good coming from a country which managed without a government for 541 days – or indeed for any mainland European country where proportional representation guarantees no majorities in any election. And this isn’t normally how British politics work. So now, added to my irritation at voting for moronic candidates, and being frustrated that even while voting for the least moronic, my fellow audience members are voting for even worse candidates, there’s now added the irritation that the process gets taken completely out of our hands by the candidates and so the most central, least divisive candidate ends up getting ejected, since both the highest scorers would rather side with those with the least votes.  Ok, that bit feels suddenly, horribly familiar.

Things take a couple of twists for the edgy in the next couple of voting rounds. We’re asked to vote on things we think, and the candidates who are most and least in-step with out views move forward and backward in line with the results. We’re asked which words we find most offensive between Cunt, Nigger, Faggot and Retard. The only other option is “none”. “All” is not an option, apparently. Rank misogyny, racism, homophobia and eugenic discrimination. Or don’t care. No choice to reject all four categories absolutely. It felt like it was actually a cleverly devised question (once I’d got over thinking it was pure shock tactics). I was surprised anyone at all voted. That anyone thought deciding one form of discrimination was more bad than all the others was acceptable or possible.  Elsewhere pick the statement we agree with most strongly, “I’m a bit...”: racist, sexist, violent... Or, none of the above.

Gradually our contestants thin out. Then there’s a surprise – the compère steps up as a candidate. On the day I saw it, thanks to a not-very-convincing stump speech, he was immediately knocked out again.

We’re gradually left with an idealist spouting total nonsense, a violent refusenik, and a racist who is repeatedly getting the most votes. The idealist walks. The refusenik opens up the possibility of handing in your voting pad as a protest. The racist populist carries on playing the game straight. So we’re left with a choice between not voting, registering the fact we’re not voting, or voting for the only candidate, the racist populist.

And you find yourself wondering how the hell we all got here, when you hadn’t really liked any of the people to begin with, and while voting was pretty irritating anyway, and while none of the candidates really spoke about anything that mattered to you, but they were the only five people there were to vote for.

And when the vote comes, the result is 100% in favour of the popular racist, opposed only by the egomaniac thug. And I was suddenly reminded as much of the people of Egypt who keep on having to refuse the results of their apparently “fair” elections, and then refuse the thugs who step into the power vacuum, all to the bewilderment of the “international community” who don’t get how a “free” and “fair” election can yield a result which is so out of step with the entire nation’s ambitions.

And you get to reflect on how this whole process, which felt trivial all the way through, still leads to a catastrophic result. And how this reflects more or less precisely how I feel about the “democratic process” in Britain. How it’s like some vague game that barely ever relates to what I actually want, and even while trying to do least harm with my voting, we end up in the situation we’re currently in. And how not-voting doesn’t change anything, just like voting doesn’t really change anything when two sets of people – neither of whom you voted for – decide to club together to beat the shit out of the poor and the defenceless on behalf of the wealthy and most powerful.

[ultra meta: when I came out of the show, the first two people I discussed it with were a British-Iranian and an Austrian. Me and the Brit were both pretty fully in favour, the Austrian said that she could see where it was going to go from about halfway through. I wondered about history. After that, I talked to people who hadn’t liked it. And, yes, I can see how that would happen. There is a sense that it’s almost too slow and too irritating all the way through. This felt like a necessary part of the process, but if the big reveal doesn’t do it for you, then I can see how the entire show would be intensely annoying for you. Still, I think the way in which the frustration became an essentially, experiential part of the show was what made it for me.]

[both photos are screen caps from the company’s trailer]
Posted by Andrew Haydon at 16:03