Gym Party – Made in China at the Almeida Festival

[NOT A REVIEW OF THE SHOW*] 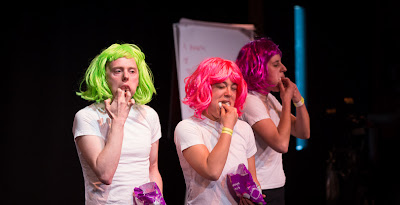 What to make of this year’s Almeida Festival? Well, probably nothing conclusive after only two shows. The obvious temptation is to view the whole as, at worst, a tottering edifice of the Ancien Régime; or, at best, a generous, well-meaning gesture that always looked suspiciously like a ghetto.

The problem with the Almeida Festival has always been its separateness. Pre-existing artists or companies brought in to enjoy a bit of largesse, but seemingly ignored by – and having no impact whatsoever on – anything that happened for the other fifty weeks of the year. A kind of avant-garde fig leaf that Michael Attenborough tastefully positioned over the middle of the year while he went on holiday.

Compare with the National where you could see that the “alternative” work that was brought in gradually started to impact on the “mainstream” work there. So much so, that by the end of the 2000s, it felt like such a division had started to become meaningless. Or compare with the Forest Fringe at the Gate seasons, where Gate Artistic Director Chris Haydon firstly has the decency to admit to the fact that it’s not Gate programming, per se, and allows Forest Fringe credit and recognition (and in doing so, gets massive credit for inviting them in); and secondly, where you get the sense that he – and his admittedly smaller-than-the-Almeida staff – are actually interested in the work, and that elements from it, or performers associated with Forest Fringe, aren’t incompatible elements to the “normal” work of the building. (As an excellent example, see the Gate’s forthcoming Traverse show starring Forest Fringe solo artist and #TORYCORE member Lucy Ellinson). But actually, this is slightly unfair. While one doesn’t see Michael Attenborough turning up, tearing tickets and watching the shows with a demonstrable hunger for invention, Almeida staffers Jenny Worton and Lilli Geissendorfer were both there.

But, for now, in lieu of reviewing the show, I will review the space.

Putting something like Made In China’s Gym Party on the Almeida stage – especially as a quick turnaround, two-date gig – perhaps exposes something about both the show and the space.

It’s interesting watching a Live Art Lite (as I tend to think of this genre – I promise it’s not meant reductively) show in a “proper theatre”. And not only a “proper theatre” but one that the group can’t really materially alter. After all, this genre of show is used to playing in much rougher and readier spaces. End on black boxes like CPT, sprawly found-spaces like the original Forest Fringe venue above the Forest Café, or improvised hipster joints like The Yard. The theory is, the work is so audience-responsive and so rough-and-ready that it can withstand anything. As it turns out, it feels a bit more like it can withstand anything except a really well appointed, posh, arty, “proper theatre”.

Actually, that’s not true, but watching Gym Party (and indeed what happens to the hope at the end of the evening), you realise that the Almeida’s stage is actually pretty damn big. Or at least, that it goes back quite a long way if there isn’t a dirty great revolving cube plonked slap bang in the middle.

As such, Made in China’s decision to stick the opening sequences of their piece quite far back feels like quite a mistake (although, for a two-day run, it hardly matters, right?). There was a moment about halfway through (perhaps sooner) when the performers stepped forward into a different set of lights and suddenly it felt like the show came alive. Perhaps it was meant to feel a bit distant or dislocated before that, but it really wasn’t helpful.

What’s even more interesting, though, is how resistant to this sort of work the Almeida’s seating and auditorium feels. I’d always thought I rather liked the Almeida – at least as an auditorium. From the first play I saw there (The Jew of Malta with Ian McDiarmid in 1999 directed by a pre-boring Michael Grandage). But I think it’s a lovely room with issues. Sit any further back in the stalls than where the circle sticks out and you’re suddenly watching a big widescreen telly. The room transforms from being a lofty, vaulting tramshed to being a cinemascope production.

I think recent directors to the Almeida might have recognised this. Certainly my recollections of Chimerica and Rosmersholm bear this out – although oddly, my memories of sitting quite far back in the stalls for Rupert Goold’s The Trial of Judas Iscariot don’t involve widescreen at all, but an incredibly present staging. I have no idea how he achieved that, but I’m once again bloody glad that he’s taking over.

And, in fact, even this version of seeing everything as either widescreen or present isn’t consistent. When the three performers of Made in China were stood at the back of the stage: widescreen. When, however, Chris Brett Bailey is stood on a stage block playing the electric guitar in a narrow beam of hazed light – probably the single best stage-image I’ve ever seen at the Almeida, FTR – I don’t remember feeling the circle above me at all. Perhaps this is all to do with where and how your attention is focussed – in a way that hardly ever happens in cinema and never on TV.

Re: the venue and the Festival, there’s also the slightly weird feeling of not knowing who you’re watching with. It seems perhaps a betrayal of many good Arts Council initiatives to say that generally speaking, when you go to a theatre, you know who’s in there with you; what they’ve paid and what they’ve paid to see. Because hitherto the Almeida has had a pretty strict programme of work – classics and new plays About A Thing, generally speaking, staged in a way that acknowledges convention and rarely tries to up-end it – you get the feeling that the core audience it’s built up might not be entirely in sympathy with a bunch of fresh-faced punks physically abusing themselves in the name of anti-Cameron agit-prop. (Yes. Gym Party is pretty blunt.) And so there’s a weird mix in the room of Made in China fans, plus hardcore theatre-goers, writers-about-theatre and industry types, plus bemused Almeida regulars who mostly go to see Attenborough and his ilk direct Ibsen and Shakespeare.

And Made in China’s aesthetic doesn’t really feel like a softly-softly gentle invitation. What is interesting, in this context – the context of feeling slightly awkward for the work – is second-guessing how much you feel you could actually defend it to a grumpy-but-theatre-literate Almeida regular; someone who “gets it” perfectly well, but might not like it overmuch.

To be honest, I’m not sure I like it 100%. There are definitely elements which worked (on this showing) far more than others, the transitions still feel a bit scrappy, and the being-walloped-over-the-head-with-the-message I could have lived without. If you’re going to do political allegory, you don’t also need to say what it’s an allegory of, would be my thought.

That said, the solo-spot monologues – about which, in keeping with this not being a review, I shall say nothing – work well and the final sickening climax of the show actually made me feel physically ill. Which, depending on what Made in China want, is probably a total result.

Anyway, THIS ISN’T A REVIEW*, so I should probably stop shortly.

Perhaps, re: the Almeida Festival I’m being too hard on what is after all probably quite a welcome initiative for a number of artists. Perhaps my cynicism about the Almeida’s motives being cynical is misplaced. But this question about whether its space is resistant to certain theatrical forms strikes me as an interesting one. As does the question of audience. Is it the theatre, or is it a company’s failure to recognise/spot the increased ratio of noise to signal which is at play here?

Further reviews from the Almeida Festival will arrive as and when the shows come.

[and maybe in the next week, I’ll get to a venue which isn’t the Royal Court or the Almeida...]


*Reviewing Gym Party is embargoed until it premières in Edinburgh. Presumably because of arcane, pre-internet laws of the rather proprietorial Edinburgh-based awards (Total Theatre, Fringe First, etc.) stating that if something receives too many (any?) reviews before the Festival itself, it becomes ineligible for consideration. As a side issue, it’s worth pointing out to these awards that on one hand, their criteria is obsolete and restrictive, but, on the other hand, pointing out to companies that playing a show as “work-in-progress” across umpteen festivals before “opening” in Edinburgh hardly makes their shows the “Edinburgh discovery” such awards were set up to recognise. I mean, the Almeida Festival isn’t the only Festival now that seems to be composed largely of press-embargoed pre-Edinburgh work-in-progress try-outs. (While we’re being honest, I should also slap myself down for wanting to at once be recognised as perfectly legitimate writing-about-theatre while also feeling that I should be allowed to do whatever the hell I like because I’m “not proper”. Anyway...).

Also, the embargo is new, so there are ALREADY REVIEWS OF THE SODDING THING.
Posted by Andrew Haydon at 13:33