[Resolution is the title of the whole season. The below review is of the 12/02/13 edition] 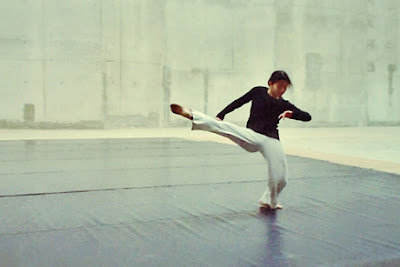 Shame on me for coming to this so late. For the majority of January and the first half of February The Place runs Resolution!; a staggering number of one-off showings of the work of young/emerging choreographers/dance companies. They’re also running the “Resolution Review” programme, with professional dance critics mentoring emerging writers. I can’t help feeling that we “theatre people” ought to have been all over this from the get-go (the tyranny of the different mailing lists). Now there are only about three left. Ah well. Something to do next year on our nights off from MimeFest...

Last night offered a programme of three short (15 mins, 18 mins and 22 mins – if the programme is to be believed. It sounds about right) pieces, plus intervals, for which £14 (£11 concs) seems maybe a bit steep, but it’s almost worth paying for the number of fag-breaks alone. So, ironically, emerging contemporary dance turns out to be the ideal artform for the chronic smoker.

The brevity of the pieces also works in their favour. It’s one of those cases where it feels far more satisfying to be left wanting to see more of all three pieces, and to be surprised when each finishes.

Of the three the first, Company Ben Abbes’s White Room is perhaps the least successful – four white clad women and one white clad man throw a series of not-especially new and slightly wobbly shapes purporting to explore life after death. Does the deceased soul gradually get used to being dead, they ask? Apparently yes, if accepting death is represented by finding a male dance partner. Still, the company seemed very young, and I’m probably being crushingly unfair. There was absolutely nothing wrong with the piece, just that – perhaps largely thanks to the choice of wallpaper music and white costumes – it felt a bit bland.

Much more interesting was Tamar Daly and Nicolette Corcoran’s Decode This. [Full disclosure, I know Tamar a bit from Devoted & Disgruntled, but rest assured I still wouldn’t say I liked something if I didn’t.] I liked this very much. Tamar is the dancer/choreographer and Nicolette is a musician – on this showing, “musician” translates as (startlingly good) singer with one of those delay/loop/sampler thingies on a table in front of her. (At some point, someone really needs to write the long essay about the felicity of these delay/loop/sampler thingies for the solo performer conjuring the babble of modern communication technologies.) This is movement appearing to respond to new-minted sound. There’s a qualitative difference between this and dancing to recorded music. Here Corcoran conjures everything from deadpan morse code to a kind of ‘90s Bristol trip-hop, while Daly describes suitably twisty shapes around it. There’s also talking – almost in the style of stand-up – about finding a message on your mobile phone after a drunk-night-out. Dances About The Internet/Cellphones tend to be unsuccessful, so it’s a tribute to Daly/Corcoran that their attempts to dance a winky-face and the kisses at the end of a text are charming and witty. Stand-up choreography had never occurred to me as a genre before, but it’s a dead good one.

The final piece is the more portentous Fade by the company Kaonashi, an exotic name for what appears to be the pet project of a bloke called Jim Sutton (choreography: Jim Sutton, sound-editing: Jim Sutton, costume coordination: Jim Sutton, etc.). Assembling an admittedly fine soundtrack of modern, clubby music (no, I have no idea about modern, clubby music. It sounded impressively with-it to me, but I’m a middle-aged theatre critic who uses the expression “with-it” seriously). The stage is thick with smoke machine smoke and bathed in nasty disco lighting. The four-strong company (Katerina Toumpa, Akiyo Ishihashi – both excellent, plus Chris Rook, and Jim Sutton(!) – both good) are dressed in an enjoyably preposterous admixture of Shoreditch twattery and Louis Seize-ure. And half white-face which, to their credit, they almost pull off.

The dancing itself is a suggestive mixture of club-dancing, something a bit like the low-to-the-floor loping of Hofesh Shechter, and I think I even spotted a bit of Gangnam Style at one point. What it’s doing, what it’s “about”, is more mystifying. And the costumes don’t help clarify it one bit. There seems to be a recurring motif of thuggery, drunkenness and violence against women (and, at one point, between women). There doesn’t, however, seem to be any immediately obvious wider point or context (dear God, I’ve turned into Billington). It looks brilliant. Stylish, self-aware, and aggressive; but if it only exists to show us some men duff up and drag off some hapless womenfolk, I have an issue with it. On the other hand, it concludes with a fluffy toy penguin hurling across the stage on a radio controlled iceberg, which while not really an atonement for misogyny, does seem to hint at a more playful side to the piece. A piece benefit from a major re-assessment of its gender relations.

Still, a good thing, all in all. I reckon randomly picking one of these every week they’re on next year would do anyone who did so a power of good. It’s good to flex different critical muscles.

[below, one of the pieces of music used in Fade]