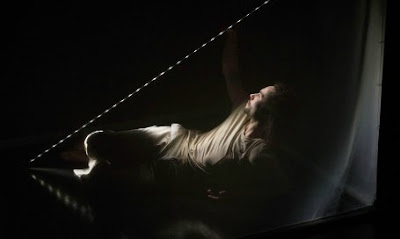 It’s exciting that the Print Room has given over a slot in its programming to a piece of newly commissioned contemporary choreography. Sadly, that’s pretty much where the excitement stops. I don’t deny that there’s a fair amount of talent sloshing around in Flow. The young choreographer Hubert Essakow has an impressively long CV as a ballet dancer, though his choreographic credits are noticeably thinner on the ground. Designer Tom Dixon by contrast has a whole OBE for his services to furniture design and apparently he even launched his own name as “a brand” in 2002. His contribution to Flow is a neatly made sort of Roman iceberg – that is to say, a four-sided, white material structure hung in the middle of the dancefloor that can be raised up into itself and lowered again.

The piece begins. Slowly. With a hippy trapped inside this fabric iceberg, rolling a giant white glowstick around. Very. Slowly (see above). He is dressed in a simple off-white long-sleeve top and loose trousers. I immediately realise that I have a very real prejudice against light clothing and slow movement in dance.

Composer Peter Gregson’s Music is also remarkably bland, consisting of a lot of over-processed piano notes, and (I think) some treated strings, as well as an atmosphere evoking the rain-sticks and pan pipes of a new-age store. It’s slow and mostly sounds like offcuts from Michael Nyman’s soundtrack to The Piano.

Any one of these elements could have been bland – the slow-motion shape-throwing, the set and costume, the sonic backdrop – but all three is too much for my tastes. (And I readily concede this is a taste thing. I’m just not that into dance pieces that aspire to the condition of a scented bath with candles). But I’m not really qualified to talk about dance. The movement is all very proficiently executed.  And you'll have seen it all before, I promise.

Dramaturgy, on the other hand, I do understand. And the dramaturgy here is roughly as developed as one brain-storming session and a resultant spider-diagram. The theme of Flow is “Water”. Essakow’s programme notes sagely observe that on meeting the designer “after a few discussions by the sea we came up with the idea of exploring the cycle of water as a metaphor for the cycle of life. Water is essential to life – it’s everywhere and affects everybody. The three states of water – liquid, ice and vapour – offered good starting points to develop and explore a range of movement ideas.”

I am being slightly unfair. I mean, the thing is completely watchable. It’s simple-minded beyond belief, but the execution itself is pretty (and you could well like the music a good deal more than I did, which would improve your enjoyment about 70%). There is also some rather nice work with a smoke machine (but nothing on that of Fujiko Nakaya in Gisele Vienne’s This is How You Will Disappear), and the – surprisingly brief – section with *actual water!* at the end is also pleasingly exuberant (but, again, nothing on Dave St Pierre’s Un Peu de Tendresse: Bordel de Merde or, I suspect, De La Guarda).

As such, given the limitations of the size of the space (and presumably budget), it strikes me that the piece’s only option for being A Good Thing – beyond the basic excellence of existing in the first place – would have been for it to be strikingly intelligent. And it just isn’t. I mean, it even goes and puts the men in long sleeved tops and baggy trousers of rough material and the women in floaty, diaphanous dresses of a much finer, thinner material. And there are only two women to three men. And this isn’t even a piece about gender; these are just someone’s ideas about how men and women differ and what they wear. Really not even slightly intelligent or progressive. Indeed, the whole production team is male except for the person credited with creating the brief video projections (a video of some water, and, later, some sentences about water and the names of some water-bourne diseases, and then some static projected directly onto the performers later still).

The Print Room has created an enviable reputation for itself as somewhere where you can see cutting-edge, intelligent work that might not embarrass us in Europe. On this showing, it would embarrass us at the degree show of any contemporary dance academy. Still, I do hope the lukewarm responses all round don’t deter them from searching out a different, better production team and trying again soon.


(photo at top by Hugo Glendinning)
Posted by Andrew Haydon at 20:37