The Trojan Women – The Gate

[part one of three] 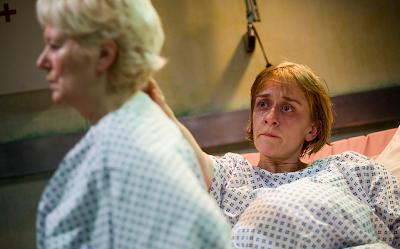 On the face of it, there’s almost no point in writing a compare and contrast review of the two adaptations of Euripides’s classical Greek tragedy. Theatrically speaking, the two productions are about as close to polar opposites as it’s possible to imagine. On the other hand, the Gate Theatre production was still incredibly fresh in my mind watching the Schauspiel Köln production, I’ve been thinking about the two together, and since I’d been meaning to write a lot about the Gate production during the period I was writing The Ever-Expanding, Time-Eating Excuse; both the production and some things it made me think about more generally.

As it happens, I think if I hadn’t seen Karin Beier’s new Köln production (we’re back in more-or-less real-time here, I saw it last Wednesday and it only opened on 10 January), I might have dwelt more on the issues I had with Chris Haydon’s British production. In practice, seeing the German one made me appreciate all the things the Gate version had done much more.

Chris Haydon’s production of poet Caroline Bird’s new adaptation of Euripides’s play turns London’s small above-the-pub room in Notting Hill into a detailed, ostensibly naturalistic recreation of a secure mother-and-baby unit in a Trojan prison. Doubtless designer Jason Southgate did some research, but the effect is more or less pure, shabby NHS; everything about the room said “Britain” to me (not least the three-pin plug sockets in the walls. One hopes the Greeks had brought travel-adaptors...). The audience is pushed right back against three walls of the theatre, with most of the usual floorspace for seating turned into the stage. The knock-on effect of this is that the action is right up in our faces; an effect of which the production makes near-relentless use. Its not non-stop aggression and violence by any means, but there is a continual, almost unbearable knot of tension; an atmosphere of threatened violence.

This sense of threat is amplified by the presence of Lucy Ellinson’s “Chorus” – here the sole figure of a pregnant, working-class woman, handcuffed to a bed – with the combination of her vulnerability, the inevitable messy viscera of birth, and the even more vulnerable state of the new-born baby. Given that I’m squeamish at the best of times, I sat watching with that sense of low-level unhappiness that something I *really didn’t want to see* was going to happen.

Given the plot of The Trojan Women – the incarceration of women in a defeated country waiting to be told which of the conquering generals was going to be raping them, the murder of a new born baby (off-stage), and the return of the baby’s corpse – here translated into a modern (albeit country-less) context, it feels almost callous to worry about what pretend gore one might have to put up with in the theatre. Especially given that we all watch the news, and we know, specifics about “Troy” aside, Caroline Bird isn’t making this up. Things like this are still happening in wars across the world. This is the real strength behind Bird’s concept. Playing as part of the Gate’s strikingly intelligent “Aftermath” season, looking at what happens after revolutions and regime-changes, the most powerful aspects of Bird’s Trojan Women is the fact that the worst of it, while true to the original, is rendered in language that makes us hear not only the story, but also the resonances of recent news reports from Syria, Mali, Sudan, Democratic Republic of Congo, Uganda, and so on.

There are aspects of Bird’s method on which I was less keen, however. While translating the story into an entirely modern context works wonders for the resonance of the ongoing horror of war, the translation of the Trojan royalty into today’s Hello! magazine version of royal celebrity is more problematic. While it does work, and fits with the adaptation’s other main strand; that of class, it unintentionally ends up signalling a simple desire for a more noble royalty. What’s Hecuba to Bird? A callous, selfish harpy, for the most part. While Andromache is an all too credible Roedean-and-pony-club type. In fairness, Bird is cleverer than that: the class-war stereotypes are interesting here because they make the principles characters of the play entirely unsympathetic, and yet we still empathise with their utter misery – all the more painful for the fact that these stiff-upper-lip Royals can barely admit it to themselves. It is a neat decision to have Cassandra, Andromache and Helen (of Troy) all played by the same actress (Louise Brealey). Brealey is excellent in all three roles. Convincingly nuts and incredibly funny as the unerringly accurate prophetess Cassandra, and snottily credible as a kind of spoiled, Posh Spice Helen.

Helen is an interesting problem. Because Haydon and Bird are working from Bird’s treatment of Euripides, all the problems that Helen’s position in the story poses to a modern, feminist sensibility have had to have been addressed in the script, rather than by playing the production against the text, and so, rather than being able to externally comment on the inherent misogyny of the position in which the narratives put Helen, they have had to somehow have her solve the problems herself with what she’s able to say in her defence. And, since Bird’s plotting is by no means revisionist, this makes for a difficult balancing act, although the way that the text acknowledges this messiness and impossibility works well.

The staging of Helen is also one of the production’s strengths. That Louise Brealey is an excellent actress helps, but its’ the conceptual framework that does the important work. On a very basic level, by having Brealey already play Hecuba’s daughter and daughter-in-law, the problem of having to put “the most beautiful woman in the world” on stage is solved at a stroke by her looking precisely the same as two other women, which in turn heightens the prevailing sense of futility of the ten year war that has been undertaken to re-capture her. It’s also striking that Brealey is, briefly, fully naked, (which, if I have time, I’d like to write about separately as *a thing*. Suffice it to say here:) it adds another dimension to the atmosphere of in-yer-face brutality and pulse-racing horror. What I mean is, Brealey isn’t just naked, she’s naked in a tiny room about two foot away from some audience members – which is a different sort of nudity to, say, Sinead Matthews’s brief nakedness (as Cassandra) in Katie Mitchell’s production of the same play at the NT in 2007, way down the other end of the Lyttleton. While it’s not erotic in and of itself, there is nevertheless *an atmosphere* around it. Brealey has written an excellent piece on how the actual being naked felt from her perspective, but so far nothing I’ve read really tackles the effect from the audience side of the equation. Brealey is, as I’ve said, an excellent actress, and the way her Helen drops her towel is a calculated affront to the other women in the room. Helen is beautiful and flawless. This is her sexuality weaponised: her body is the real site of the Trojan war and every other women in the room knows it. Something about this moment in the room, in the theatre, manages to communicate that. It is, if anything, infinitely more affecting than the moment later where Andromache’s murdered child is brought in; a curious, purpley-coloured homunculus, dripping stage blood. And I don’t think that’s down to simple British embarrassment (seated in front row opposite a significant number of Britain’s leading male critics on press night, for the duration of the nudity I scrutinised them, while they all scrutinised their notepads. I don’t think any of us looked at the naked actor, which is also an interesting response in itself).

At the time, I remember I also had some misgivings about some of the poetic language Bird had used in the script – in short, I wondered if it wasn’t occasionally just a bit effortful (although not a patch on the effortfulness one finds reading literal translations of the ancient Greek, which, in English, sounds like just about the worst poetry imaginable), wondered if the humour wasn’t just a bit too relentless (there are *a lot* of jokes, many of them very funny, but not all of them seamlessly blended into the overall atmosphere of every moment), and I had wondered about the extent to which the script perhaps made bangingly explicit the feminist and socialist concerns of the adaptor.

Watching the German version, all that I could recall about Bird and Haydon’s production was the appalling sense of how harrowing I’d found it. I mean, not *actually* harrowing. Obviously. No one was *really* burning my village or raping my sister. And yet I did still come out with my pulse racing, my heart in my throat, and my clichés all raring to go. And it was this, and not my misgivings which I took with me into the Köln production. And these were the sensations I missed when the same moments of the plot happened in the German version.

[continued in Germany below]
Posted by Andrew Haydon at 14:18