Troilus and Cressida – RSC & Wooster Group at the Riverside Studios 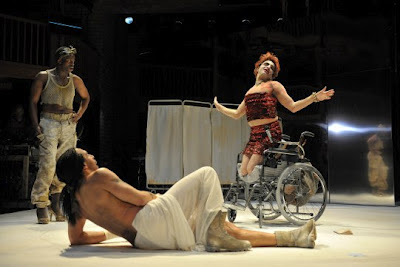 “Troilus and Cressida started the twentieth century as the subject of much journalistic criticism for generic confusion and misanthropic bitterness. It 'came into its own' as after the Second World War, then Vietnam, then the Gulf War, reviewers began to read it as 'relevant': a relentless attack on the vested political and personal interests behind military conflict. A play of 'bits and bitterness', as a reviewer of Anthony Quayle's production describes it in 1948, becomes permissibly bitter over the course of fifty year of modern warfare. Whether the play is permitted to be 'bitty' is another matter.”


The basic deal of the new RSC/Wooster Group production of Troilus and Cressida is this: the RSC are playing the Greeks and the Wooster Group are playing the Trojans. The two companies rehearsed separately until July, and then put their stuff together and worked out how to do the surprisingly few scenes in which characters from their two respective camps actually interact.

Interesting additional information about the production includes the fact that the director originally slated to helm the RSC side of the production, Rupert Goold, was forced to cancel his commitment to the project in March: a moment immortalised in this amusing video made by the Wooster Group.

From the outset this was always designed to be a project that would take the perceived “bittiness” of Shakespeare's play and shove it right to the fore. I would argue that the removal of Goold from the process and the substitution of RSC playwright-in-residence and director Mark Ravenhill then added an extra, unforeseen level to the mix. While Goold is widely held to be the RSC's most “visionary” director, Ravenhill's influences are perhaps even more eclectic, ranging from Frank Castorf and René Pollesch at the Volksbühne to Max Stafford-Clarke at the Royal Court.

As a result, the perhaps-expected knowing postmodernism of an RSC Men-in-Ruffs type approach never materialised, leaving this a production in which the Woosters were suddenly not the only experimental theatre company on the block.

It is sensible to discuss the two clashing aesthetics separately, at least at first.

The RSC's approach to the Greeks is, if anything, even more difficult to sum up. It goes something like this: They are soldiers in the British Army; they are Heroic Men; they are cartoons of masculinity; they are tired; they are crippled; they are in drag. They are doing both the RSC Vox Pulchra and a string of accents ranging from Ireland to Jamaica via Blackpool. Visually the thing is another bunch of bits. Set, in the Riverside, on an exact replica of the of Stratford Swan Theatre's narrow thrust stage – painted white, with a revolve at the far end – which is sits, not in the midst of warm, refurbished wooden beams with a gallery giving the whole space a nice big hug, but stranded in a cold, black, high-ceilinged, breeze-block, brutalist cell.

On the revolve, there is a brief, high, mirrored wall, empty on one side (for the Greeks to look at) and beset with a tangle of tee-pee and Native Americana on the other (for the Trojans to sit admist). The Greek tents are, when required, represented by an old-fashioned hospital screen (metal frames with curtains on castors). The far end of the stage is flanked on either side by banks of undisguised technology and percussion.

The overall aesthetic, the overall feel of the thing, is of a total lack of completion. The Wooster Group's Native Americans even wear strange latex classical statues on their backs, as if they're somehow crawling out of these statues. It is the opposite of “polished” or “finished” “product”. This isn't a criticism. Primarily because everything we see looks intentional, deliberate. It doesn't, for example, seem under-rehearsed. No one slips up on their lines or forgets them. At no point do you get that appalling feeling that the cast are panicking or don't know what they're doing. Indeed, they manage to appear more in-the-moment even while, well, essentially reciting Shakespearean poetry. The thing even kicks off with the RSC's actual stage manager reading the prologue as if it were a “please turn off your mobile phones, and here are the fire exits” notice. These are both intelligent choices, and courageous ones.

There is something hypnotic about the Wooster Group's performances as the Trojans. Not so long ago, reviewing Scott Shepherd in Gatz, I compared his voice to the gravel and cadence of Johnny Cash. Here, as Troilus, his speaking voice more acutely recalls that other great American balladeer, Kermit the Frog. This is true to a greater or lesser extent of all the Trojans. They have adopted a soft (but radio-miked), almost sing-song speech pattern. Not, I'm sure, to authentically recreate C17th Native American accents, but perhaps to point up a sense of Otherness.

Apparently the rationale for the Wooster Group's choice to play the Trojans as Native Americans springs from the fact that at the time of Troilus and Cressida's inception (Wikipedia has it as 1602, other sources put it a couple of years earlier), the Mayflower was still 18(+) years from landing on Plymouth Rock. The majority of North America was still peopled by natives. On one level, this feels slightly disingenuous since, with one exception, the Woosters look to be of European heritage. At the same time, however, it is an inspired choice to reflect the huge unspoken theme of the play. Set seven year into the Trojan War, we are looking at an army twiddling its massed thumbs three years before the most celebrated genocide in history.

What is fascinating here, however, is that by not costuming the RSC in period costume (with the possible exception of Scott Handy's brief, brilliant, turn as a Gloriana-like Elizabeth I bewigged, falsetto-singing Helen of Troy), but rather dressing them as modern British soldiers end up reflecting the extent to which Britain has subsequently been re-subsumed by the United States. Sure, they're wearing the uniform of the paratroopers, but it's the Gulf War/Iraq Invasion +away strip+ version. Similarly, the Irish-accented Ajax, played here as a total moron by Aidan Kelly, comes on as a kind of WWF Wrestler. Indeed, the multi-ethnic cast reflects both modern Britain and the 400 years of Imperialism which resulted in such a diverse population. That said, it's so unfussily done that you'd have to be a massive racist to be worried by it. It also presents a modern-world equivalent of the extent to which the Greek forces themselves comprised armies from numerous different autonomous kingdoms across the Aegean, although I'm reasonably sure that's me just over-reading the casting.

However, at the same time as all the above readings being both legible and suggestive, there is none of that all-too-familiar sense of having some sort of contemporary parallel rammed down your throat. This is, at root, just two companies “doing the play” as they see fit. The Woosters explore strangeness, alien text and dislocated performance, while the RSC, in a strange and much-lighter-than-usual way, seem to have found a new way of breaking into the text to, well, basically to do it as it's written. I'd argue that few, if any, of their decisions actually constitute even a slight break with what was written 400 years ago. (After all, if you think giving Ajax an electric guitar and Thersities a wheelchair is a-historical, what does that make the Elizabethan practice of putting Homeric Mediterraneans in ruffs?)

I won't pretend the production is “an easy watch” per se. On the other hand, as long as you're up for a bit of concentration, is it perpetually engaging. It's quite a difficult thing to describe. It feels a bit like the show doesn't give a fuck about trying to seduce its audience – although Zubin Varla's turns as a David Hoyle-inspired Thersities (recalling Jack Birkett/The Incredible Orlando's Gollum-like performance in the BBC Shakespeare production), and Joe Dixon and Clifford Samuel as dragged-up Achilles and Patroclus are sheer, crowd-pleasing pleasures. At the same time, it is this very sometime indifference that makes you watch all the harder and listen more carefully. It is the difference between Art and an audience simply being flattered. 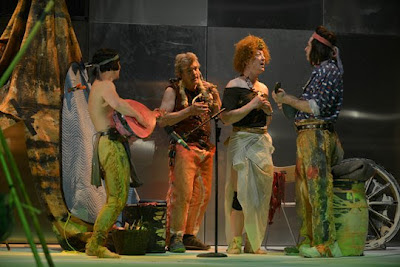 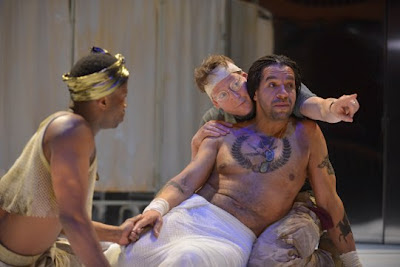 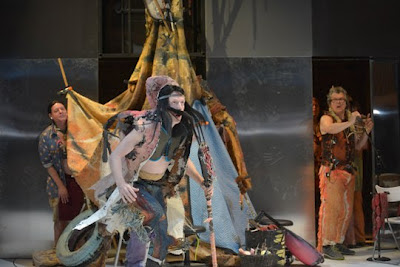 [Full disclosure: I watched the second and third weeks of the RSC/Greeks rehearsals in London. This was before ISDF. Back in June when Scott Shepherd was still the toast of the town as Nick in Gatz. I went to the pub with the (RSC) cast a couple of times and chatted to Mark a bit about the show. I also chatted to Rupert Goold about the origins of the project, and got some bits and pieces about the Wooster Group's process worked from them too. The additional information was interesting, but it wouldn't have stopped me saying I thought the whole thing was horseshit if I'd thought it was. Which I didn't.]
Posted by Andrew Haydon at 13:06