The Knot of the Heart - Almeida 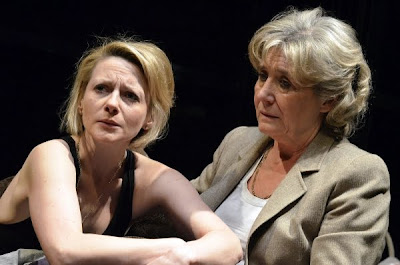 An interesting phenomenon, when it comes to reviewing New Writing, is the rush and the urge to identify “themes”. In Rewriting the Nation terms:

“If the nineties were all about druggie council estates, David Eldridge's Knot of the Heart, like Nick Grosso's Ingredient X before it, proves that drug use and addiction were also very much middle class problems. The play shows Lucy, who has just started a career presenting children's television, gradually succumbing to heroin addiction; but, with an alcoholic mother and a self-harming sister, Lucy's not the only addict in the family...”

Which would be a pretty reductive way of viewing the play. Certainly addiction is something in the play, but it isn't a play “about” addiction. Indeed, if anything, it's actually all about class. Or families. Or death/grief/bereavement/guilt/love/being-a-mother/being-a-daughter. Or blame.

The point is that it's a story. It's a play about *some people*. Yes, as a study of addiction it is without recent peers – it makes That Face look like a vindictive, petulant tantrum by comparison. Early on it has more in common with those dramas of familial claustrophobia – from Who's Afraid of Virginia Woolf to Bedbound – but even this seems too schematic a placing. Neither location nor kinship are ultimately the trap. There's also more than a little of the Ibsen about it. At its core – certainly “core” in the way it is placed by the narrative – is a Dark Family Secret, the uncovering of which...

And here we run into another problem of trying to write seriously about the play. This is a strange thing about plays which tell a story, but also include what could be described as “discussion of a theme” – let's say here it is addiction for the sake of argument. The story, the way the events unfold, the simple one-thing-after-another-ness of it all, always appears to be a part of the thesis. But you're not meant to talk about “what happens” in a write-up. It's a bit like trying to explain what Christ meant with the Parable of the Prodigal Son without giving away the ending.

Eldridge has clearly done thorough research into his subjects – let's say those are heroin addiction, alcoholism, self-harm, the middle class and the language of addiction-therapy (“clearly” not least because he's said as much). Each of the three principle characters (Lucy, her mother, and her sister) could be seen to be an embodiment of one of these problems. Of course, they're not. They're characters who are meant to be quite like “real people”. As such, their relation to even this particular facet of their character is governed, at least in the dramatist's mind, by his impression of how that character would deal with a certain situation. Which of course makes them flawed ciphers for their addictions. But Eldridge is more than canny enough a dramatist to know this. So this is not a play which purports to give a definitive study of “addiction”, but rather a humane, concerned, compassionate-but-unflinching portrait of a particular woman/family through a difficult three years at the end of a difficult thirty years.

In terms of the writing, well, it fluctuates a bit. Some of the early scenes – one between the mother and the sister in particular – feel like either the actors haven't quite hit the “right” rhythm (I say this knowing full well that it's all a matter of taste), or else the language is deliberately condensed into a sort of realist cordial without the water added – all the right favours are there, but they haven't been a diluted so they don't taste like “real” real life should.

This gets ironed out by the last scene before the interval (running time: 1hr20(?), 20 min interval, 1hr6). Suddenly, all the stuff that might have been being manoeuvred into place a tiny bit obviously is in the right position and the thing takes off. The play is flat-out engrossing, without little tics distracting you.

But more than the fact that Knot... could be described as an “about” play which easily transcends its “about”ness, what's really interesting is the way it's structured. Along with “Where are all the right-wing plays?” and “Why can't young writers write 'Big Plays'?” one of the most persistent grumbles about “New Writing” is that it seldom produces “Big Parts”.

Knot of the Heart has created precisely that. It's already a matter of record at the central figure of Lucy was created by David Eldridge for actress Lisa Dillon. And it's a thumping big part: on stage most of the time; in most of the scenes; utterly central and given a hell of a lot of decisions and transformations, moods and attitudes to portray, this is indeed a Big Part.

It's also a difficult part. Lucy is by no means a sympathetic character, nor does Dillon try to make her one. She is messy, self-absorbed, selfish and deluded. What's most interesting about Dillon's performance are the switches in register. She coquettes about, making herself small, curling up, whimpering and so on, but at other points, suddenly seems to discover a deep, almost Thatcher-like stridency and power.

Margot Leicester as her mother, Barbara, is also gifted a whacking great part, which she inhabits thoroughly, if perhaps over-playing the jolly, ho-ho-ho Middle-class-mum act. Although, it's hard to tell whether it is the actress or the character who is doing the over-playing. Much more probably the latter. Abigail Cruttenden makes heavier weather of sister Angela, although again this could be a deliberate choice rather than a failure of capturing the character.

It is briefly pleasing to note that the programme contains the credit “Kieran Bew - All the Men” - although perhaps the most interesting element of this is that this might mean Knot of the Heart contains the only – unannounced, unsignalled – performance by a white actor of a black or Asian character.

The strength of Knot of the Heart is in it's clear-eyed telling of a true-sounding story. There's a feeling of well-realised authenticity and accuracy about it. Without giving away the ending, it's harder to say any more about it than that. 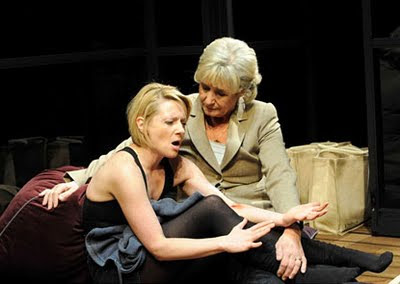