Coronation of Poppea - The King's Head

[1st and only preview – see disclaimer*] 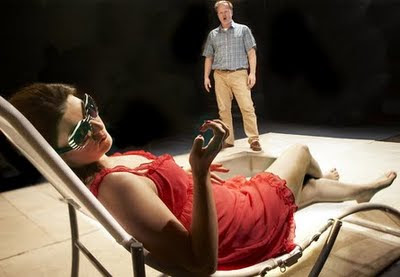 It can only be a matter of time before some wag notices the confluence of Opera-Up-Close and Mark Ravenhill and coins the albatross term In-Yer-Face-Opera. It's hard to imagine something less fitting. Off the back of the massive sell-out and now Olivier Award-winning success of La Bohème, entrepreneurial wunderkind Adam Spreadbury-Maher, who was also, until recently, running Kilburn's Cock Tavern where La B. originated, has somehow managed to get hold of Islington's King's Head and rebrand it as London's Little Opera House. It's an ambitious project, and one for which Mark Ravenhill's new translation and staging of Claudio Monteverdi's L'Incoronazione di Poppea now makes an excellent case.

Monteverdi's opera, apparently first staged in the year of his death, 1643, at the Venice Carnival had survived in two apparently differing versions (source). Ravenhill also notes that this represented Monteverdi taking his opera outside its customary in-court setting to “the people”, which chimes nicely with the staging of this version in the back room of the closest thing Islington has to a spit 'n' sawdust pub.

As narratives go, the Coronation of Poppea is distinguished largely by its playful cruelty. It starts out with the titular Poppea sulking at the Roman Emperor Nero for not yet having divorced his wife, Ottavia (the opera is historically interesting for dealing primarily with real figures and not mythical characters and Gods – and here, what Gods there were in the original have been cut). We then learn that Poppea hasn't even left her husband Ortho, who in turn is paying visits to one Drusilla, who is in turn in love with him. Thrown into this heady mix is the complicating factor that Nero is a psychopath with the power of life or death over everyone in Rome.

Morally, this is an antiquity. The philosopher Seneca, who also features, is at his most noble when putting his stoic philosophy into practice when commanded to take his own life. Similarly, if narrative serves as vindication – or as Wilde has it: “the good end happily, the bad unhappily” – then the conclusion as to what constitutes *good* here is amoral to say the least.

What is surprising, then, is how much tenderness and humanity Ravenhill's newly translated libretto and staging manage to wring from it. This is perhaps the best libretto for an opera I've ever heard. And that includes a fair few originally written in English; it knocks spots off Richard Thomas's words for Anna Nicole at the Royal Opera House, for example. There isn't a clunky phrase or rhyme that I noticed. Instead you get a real sense of the revolutionary (for its time) dramatic story-telling of the original, rendered in unobtrusive but elegant, witty contemporary language. There's even a bunch of playfully self-referential “fuck”s thrown into the first three minutes. But even these are still in keeping with the context.

But it's the tender stuff that really hits home. Granted I don't know the original backwards, but assuming the words stick roughly to what was originally being said (you know, like a translation), then the felicity with which syllables fall into place, while still conveying an entirely credible and genuine and moving sense of what they mean, is pretty awesome.

The closing duet, Pur ti miro, pur ti godo is simply rendered as “When I see you, when I touch you”, for example. It sounds too simple to be even worth noting, but it's this very simplicity and acuity of feeling that makes it work.

Aside from Ravenhill's contribution as librettist and director (of which, more later), the other real star here is Alex Silverman's re-imagined score. As has been noted elsewhere, there isn't really a definitive score for L'Incoronazione... and so chopping and changing at will isn't even controversial. In terms of the music, though, it is not so much the cuts and dramaturgy that stand out as the impressive re-working of the instrumentation. Monteverdi's music has been scored for a jazz trio of piano, double bass and saxophone(s) (I think various different sizes of sax are deployed – insert own headline along “Silverman discovers Monteverdi's sax appeal” lines).

Given the twiddly, treble-heavy nature of baroque music – those almost too-sharp harpsichord trills and high-pitched violins – you might think the transition to the mellower tones of the piano and double bass would take the edge off the music. It doesn't. You can still hear the ornate curlicues of the baroque original, but splendour/grandeur are traded in for sheer energy. After all, the real difference here isn't the change of instrumentation so much as the fact that three people are filling in the notes originally provided by an orchestra. It's well worth trying to get yourself a seat from which you can also watch Silverman at the piano, which is a whole brilliant performance all of its own.

As well as cutting away a lot of polytheistic dramatic dead wood, this version also inserts a new aria written by Michael Nyman. I am a big fan of what Silverman had done to Monteverdi's score, but, if anything, I'm an even bigger fan of Nyman's new “intervention”. Probably only lasting three-to-five minutes, this is the most blistering part of the evening. It might benefit slightly from having entirely modern sensibilities from the off, rather than skillfully adapted antique ones, or it might just be that I prefer Nyman to Monteverdi – but after a lot of plangent trills, the new aria comes on almost like a cleansing dose of punk rock. It's the same insistent, hammering rhythm familiar from his Purcell pastiches for The Draughtsman's Contract soundtrack, backing a satisfyingly vindictive, vengeful prophecy of misery and death for Nero and Poppea sung by Ottavia as she covers herself in handfuls of stage-gore like a kind of jazz-baroque Siouxsie Sioux.


I should probably couch some of my quibbles here in the fact that I only saw the first preview*, although my basic problem is far more silly and fundamental: I'm starting to realise that I'm not a massive fan of small rooms. Which, when an entire enterprise is predicated on the smallness of the premises, seems much more like an irreconcilable difference of opinion. I just like being a bit further away from the action than one can actually get in the King's Head. I sat at the back – a perfectly excellent view of the new side-on Thrust stage configuration, and it still all seemed a bit close. I do wonder, though, if part of the issue here is to do with a) the production still needing a bit of time to bed in at that stage, b) the fact that opera singers presumably have much less training for the volume at which to pitch a performance in a small room with a low ceiling, and, c) an interesting disjuncture between the ethos of the music (jazz) and the singing style (still operatic).

That is: I wonder how much the style in which opera is sung has to do with the size of the venues in which it has traditionally played – that full-throttle mass of human voice making the most sound it's humanly possible to make tunefully. In a small room there's a question of whether that sound needs some adjustment or whether it is an unalterable part of the genre.

Relatedly, while with jazz the point is to look and sound as relaxed as possible, opera is perhaps the most effortful way of singing ever devised, to the extent that it sometimes looks physically uncomfortable. As such, it sometimes feels like the score here perhaps even accentuates this effort unhelpfully. I don't know if any of this is relevant, helpful or even accurate, though – perhaps it's much more a matter of conventions which I need to get more used to.

The clarity of the staging and the acting within it are admirable. Previous Ravenhill collaborator (on Intolerance) Rebecca Caine as Nero's spurned wife, Ottavia, stands out both vocally and dramatically. Although there is strong support from Martin Nelson's Seneca and counter-tenor David Sheppard as the cross-dressed, would-be assassin Ottone. Elsewhere, Adam Kowalczyk's Arnalta and Jessica Walker's Nero add to the cross-dressing fun, cross-cast to good effect (in the original, Nero is thought to have likely been sung by a castrato; in our more entlightened times, a soprano seems like a fair compromise). It's not exactly gender-blind casting, hoever. One gets the impression Ravenhill quite relishes the draggy aspect – introducing the premiere with quotes not only from Seneca, but also RuPaul.

The setting feels mildly more indicative than fully realised, but adds to the likeable sense of a DIY ethic running through the whole. And, in fairness, was infinitely more ambitious even in its lo-fi state than many far more expensive, grandiose sets in “proper” opera houses. For patently very little money, designer Katie Bellman has pulled together an look that recalls the grungy, trash-aesthetic of Frank Castorf's Volksbühne.

So: yes. The Coronation of Poppea is an excellent place for Opera-Up-Close to be right now, although I can't help hoping that a bunch of money gets flung at it so that it can transfer to a slightly bigger space – it doesn't have to be enormous, the Almeida round the corner would be excellent – and has the budget to more properly realise the set and costumes. I realise these are terrible things I'm saying and I should be embracing the tiny-room-ness of it all more wholly. I'm not sure what one does about one's desire for a bit more remoteness from one's opera, though. It plainly has nothing to do with this excellent production. I think it's just a matter of taste, and/or training. That said, if Opera-Up-Close continues to work this well, I might yet be persuaded that I want my Opera in my face after all. 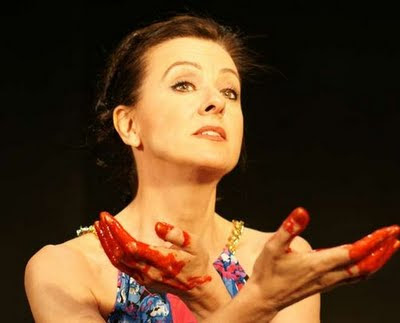 [*Disclaimer: I saw the only “preview” performance. This preview was the first time this staging had been performed and, as director Mark Ravenhill explained before the show started, was still missing a couple of scenes. As well as being the only preview, it was also still a week before Press/Opening night [now almost a fortnight ago], so there was still a week of rehearsal to go. The only reason I went to this preview, was that it was the only night it was on when I was in London. That said, I emailed Mark and asked if I could have a press ticket and he said yes, thus, I think, obliging me to write. Not sure where that puts me in the critics/bloggers // to-preview/not-to-preview debate. Also, in the spirit of full disclosure, Mark's a friend; although that wouldn't stop me writing an unfavourable review of his work if I thought it was bad, as I think he knows

Happily, most of the “proper” reviews I've read since seem equally thrilled with the thing. Among the best are:

and the blog Intermezzo


The FT – which doesn't go for the Nyman intervention at all (more fool them) – does make an interesting point about its dramatic effect]
Posted by Andrew Haydon at 11:43