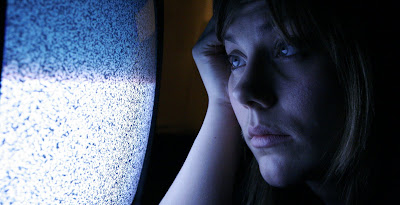 Love in (3) Parts is a well-crafted, nicely designed, excellently acted bit of fluff. It’s basically a boy-meets-girl story, told through a series of cut up scenes from the beginning, middle and latter stages of a relationship.

Paul and Claire work at a publishing company together and Paul has asked Claire out on a date. He’s nervy, socially awkward and - it gradually becomes clear – is suffering from a rather pronounced case of OCD. He’s also rather sweet, kind and gentle. Claire is friendly, kind and seems keen for things to work out between them, and spends her spare time having conversations with her dead mother in the static of a television screen.

Their progress from awkward first date to the point where they’re living together and leaving each other cute messages on Post-it notes is nicely observed. Their humdrum lives, Ikea furniture and modest but nice aspirations (he wants to be a graphic artist, she has ambitions of publishing a children’s book she’s discovered) make them the kind-of everycouple to whom it is impossible to object.

Similarly, the production, which feels curiously like a companion piece to Third Angel’s Presumption (seen at the Southwark Playhouse last year), is nicely put together. The set is unfussy and stylishly lit. The way that the John Shaw’s script experiments with linearity while using the most normal everyday language is, again, nice. The two performers, Rich W. Burton and Sally Kent, both turn in well observed, truthful, effective performances as Paul and Claire. The addition of a live musician who underscores the action with deft acoustic guitar melodies and songs while sitting invisible in the set, but occasionally passing one of the characters a mug or pen, is a lovely touch.

But for all this, the piece does feel somewhat contrived and slight. Given the themes and events, there is room for a huge emotional impact which it simply doesn’t deliver. The company’s own programme seems to be making a virtue of this modesty, as if Lost Dog Theatre Company is a bit too polite and bashful to want to make a fuss about emotional turmoil. Perhaps it’s not a bad idea, either. This is kind of post-histrionics relationship-angst theatre. Gentle, unassuming, kind and quietly sad; without having to raise its voice.
Posted by Andrew Haydon at 18:35