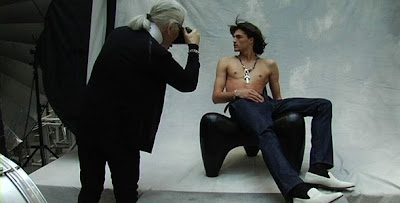 One of the most appealing things about doing Culture Clash on 18 Doughty Street is that it makes me see things (films usually) that in the normal run of things I would never have bothered with. Lagerfeld Confidential is precisely one such item. I haven’t seen a lot of advance-publicity for this film, so the preconceptions with which I approached it were largely those born of the general prejudice which I nurse against the fashion industry. I have absolutely no time for haute couture. The whole business strikes me as an offensively decadent affront to all that is decent, hard-working and nice; not to mention the very plausible worry that it promotes and trades heavily on women starving themselves. Suffice it to say; had I not been required to see Lagerfeld Confidential (henceforth LC), there is no reason on God’s earth I would have bothered. And I would have missed out on one of the most fascinating films I have seen this year.

From the off LC is surprisingly, pleasingly far from what I expected. The fashion industry has a pretty well-defined trope: the models, the cat walks, the lights and cameras; all the brittle gloss and angular lines. LC opens with an agreeably fuzzy shot of grey waves breaking over rocks at dawn or dusk with the Lightning Seeds’ Pure playing over the top. The waves on their own, you could perhaps assimilate; it’s the use of one of pop music’s most ingenuous, sweet-minded, innocent love songs that throws you. The lo-fi film stock is also a surprise. The idea of the world of fashion being presented as anything other than crisp, hi-gloss is disconcertingly disarming. Of course, to an extent, looking cool is the main thing, and lo-fi is a construct first and a, uh, signifier of integrity much further down the line.

The next shot, in which we see Herr Lagerfeld for the first time, is taken from his bedroom. He is in the next room, half visible though an open door. The camera looks round the room. And it keeps looking. Impolitely. Pruriently snooping. Scrutinising little details. Looking at the bookshelves, at the artfully arranged piles of books, at the minimalist designer bed and lighting which contrasts with the general atmosphere of 19th century peeling grandeur. Lagerfeld totters in. He is a gloriously over-the-top parody of a fashion designer: clad in tight, black jeans and a very designed high-necked jacket; his white hair in a pony-tail and eyes covered with trademark sunglasses (indoors. In a dim room). He is choosing thick, chunky metal rings to wear, and accessories for “the brats”. At one point he takes one of the bowls containing the rings and tips the contents into a zip up bag, wryly observing he “might need some more rings later”.

And it is utterly charming. You immediately warm to the man. He clearly has a live, alert sense of humour and an undeniable intelligence. He is also deliberately charming. The unexpected attractiveness of the room helps. This is not the living space of someone who subscribes to preposterous, fashionable-because-we-say-so trends; this is the room of someone who clearly has a very fine sense of aesthetics.

What is interesting about the film is how little context it gives its subject. Perhaps, in the right circles, Lagerfeld’s reputation-making triumph in turning around the fortunes of Chanel in the Eighties is such a well-worn tale that it needs no further explanation. To this fashion-ignoramus it was a closed book which was barely ajar at the end of the film. Instead director Rodolphe Marconi contents himself mostly by following Lagerfeld around and framing artful shots on different film stocks. This is another point in the films favour. Seeing it maybe a couple of weeks after the immaculate Control it may have suffered for being somewhat overshadowed, but it is a very different sort of creature. Where Control is frequently gorgeously minimal - almost Teutonic - LC is more like in the vein of a lo-fi David Lynch or Stanley Kubrick.

Another fascinating aspect of the film is the way that it seems to play with ideas of narrative and, in a very French, post-modern way, with ideas of genre. There is a long, languorous sequence in which Lagerfeld is photographing (shooting?) a particularly beautiful male model at some out-of-town location at sunset and at night. The next thing we see is Lagerfeld driving off alone in the morning, back into town. The whole episode reads like a sexual liaison, or even a murder. Lagerfeld makes a convincingly sinister hit-man with his dandified black suits.

The business of photography is central to the whole film - indeed Lagerfeld seems to spend more time taking pictures than he does designing clothes. This again adds to the film’s very contemporary preoccupation with both the image and post-modernity’s Russian-doll layering. There is one scene in which the director films Lagerfeld photographing a gaggle of male models who are posing as a paparazzi pack, all aiming cameras and flash bulbs at Lagerfeld. It seems to be a key scene in unlocking what the film is up to.

Elsewhere, Lagerfeld amuses himself unpicking the documentary process. There are a number of sit-down interview moments, staged mostly in Karl’s sensationally decorated apartment. From behind the camera, the director, who can be glimpsed occasionally in a handily positioned mirror - further foregrounding the filming motif - starts tentatively to ask Karl about his sexuality. Lagerfeld laughs and teases him about his coyness. The power dynamic flips, and rather than an interrogation, or a session with a psychiatrist, it becomes a matter of the director trying to reassert his conventional dominant role as questioner. That Lagerfeld is both witty, and oddly cold on the matter further enhances the interest, telling in unsentimental matter-of-fact tones of how he was twice sexually assaulted aged 12, and that his mother's reaction had been: "Well, if you will go out looking like that".

The film offers is a portrait of a man absolutely determined to be in control. At no stage does the mask slip; indeed, the sunglasses barely ever come off. More than that, much - most - of what he says regarding his emotional life revolves around his continual determination to prevent anyone from getting too close to him. He is explicit and coldly rational on the point. It is for this reason, I think, that the Telegraph, Guardian, and Metro didn't much like it. The FT seemed to have a tiny bit more time for it, but all four reviews seem to want the film to give it all to them on a plate. What __ says about Lagerfeld giving good aphorism is interesting. At two weeks' remove I am reminded of Anthony Blanche's description of Sebastian in Brideshead Revisited, when he asks "Tell me candidly, have you ever heard Sebastian say anything you have remembered for five minutes?... When dear Sebastian speaks it is like a little sphere of soapsud drifting off the end of an old clay pipe, anywhere, full of rainbow light for a second and then - phut! vanished, with nothing left at all, nothing." This is a film that needs to be actively read and engaged with. It is not a simple documentary, it is a playful text. The film is nothing like a “warts‘n’all” biopic. Quite the reverse. It is a film of surfaces about surfaces. As such, it is both beguiling and seductive.
Posted by Andrew Haydon at 19:48