In praise of... Nouvelle Vague 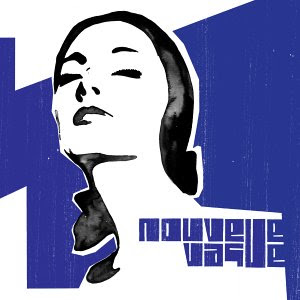 The idea behind the band Nouvelle Vague was apparently suggested itself originally by the disparity between the French new wave and British/American new wave, and the desire “to forget the initial punk or new wave background of each song, keep simple fundamental chords, work with young singers who never heard the original versions, and make the quality of original songwriting happen in a completely different way [using] bossa nova, jazz style and sixties pop”. The big selling point here is not amusing cover versions of classic songs, but a clever way of getting the less accessible end of one’s record collection played in polite company at dinner parties and the like without anyone referring to it as “a racket” (Buzzcocks), “really, really depressing, actually” (the Sisters of Mercy, Joy Division) or simply “crap” (Bauhaus). On top of this, the band - a handful of international session musicians and singers gathered together by the project’s originators Marc Collin and Olivier Libaux - are well beyond merely credible.

The first album’s track-listing offers pretty much the standard early Eighties compilation experience: Joy Division - Love will tear us Apart, The Undertones - Teenage Kicks, The Sisters of Mercy - Marian, The Cure - A Forest and Depeche Mode’s Just Can’t Get Enough all make an appearance. In the main these are dispatched with an unshowy stylishness, and while obviously dissimilar to the originals, they don’t feel like radical departures. Pretty much what one might expect, in fact. Love Will Tear Us Apart benefits particularly well from the treatment, but they remain pretty much superior cover versions. While their take on XTC’s Making Plans for Nigel fails to improve on the dreary original.

More surprising are the versions of The Guns of Brixton (orig. The Clash) and Public Image Limited’s (This is not a) Love Song. Never has medium been more dislocated from message in the case of the former. While the Clash’s original both lyrically and musically evoked a gritty, violent London Nouvelle Vague’s version turns the whole thing into a sassy come-on while retaining the words. The challenge “You can crush us, you can bruise us, even shoot us” transforms from an embattled challenge from the streets to a submissive French mistress. More so, “...how you gonna come?” is just filth. Similarly P.I.L.’s original left little doubt that it wasn’t a love song, but this Girl from Ipanema treatment moves the ambiguity several notches to the leftfield.

There are a clutch of real stand-out tracks though, which, in the main were songs which I previously didn’t know. The version of Modern English’s I Melt with You is a genuinely pretty, stand-alone pop single. Similarly Tuxedomoon’s In a Manner of Speaking has all the jagged corners of the original smoothed and polished away leaving a perfect, bitterly saccharine four minute love song.

Friday Night, Saturday Morning (orig. The Specials) enjoys some atmospheric studio production treating the vocals and adding discreet background noise that locates the song in the environs described. The song itself seeming to move from loutish Coventry to a dreamy a Julie London-style 60s Chelsea.

Conversely, the version of the Dead Kennedys’s Too Drunk to Fuck, while only a distortion pedal and a bit of speed away from the original, in terms of the music, enjoys a vocal track which genuinely sounds like the singer means it, and finds the whole thing pretty funny. Although, as an aside, apparently Dead Kennedy Jello Biafra has expressed dismay that this version had been given the green light to accompany a rape scene in the Grindhouse double-bill. Which makes a lot of sense.

Perhaps the most radical departure, is also one of the albums biggest gems. Killing Joke’s snarling agit-punk tune Psyche turns into a kaleidoscopic, hallucinatory bit of batshit-crazy-girl gothic psychedelia, with the vocalist hissing the once-yelled lyrics into something that sounds like it wouldn’t sound out of place in Rupert Goold’s Macbeth.

The second album - Bande à part (clever huh?) - takes much the same approach, albeit with an endearingly wacky calypso-themed “concept” behind it. Don’t worry, as concepts go it’s not in the least bit intrusive - this is still some fine musicians playing some idiosyncratic cover versions. Although, if you read the sleeve notes there are some entertainingly nuts explanations of what Marc and co. think they are up to.

Again, there is an admirable spread of songs being covered here. Echo and the Bunnymen’s Killing Moon and Buzzcocks’s Ever Fallen in Love are possibly two of the most obvious. Both are dispatched quickly - pretty much at the same tempos but more, uh, acoustically. Other less interesting items on Bande... include Blondie’s Heart of Glass, which suffers for already having had a female vocalist on the original and thus not making much of an imaginative leap. Also, missing its staccato drum machine pretty badly, New Order’s Blue Monday is pleasant but little more. In a slightly different league, the version of Visage’s three note drone Fade to Grey only remains as pointless as the original, which is to say, utterly pointless, but sometimes exactly what you want to listen to.

But best of all is the version of Dance with Me by Lords of the New Church. I have to confess I have never heard the original – even the sleeve notes acknowledge that the song has little currency outside France and is largely forgotten, but this is a perfectly dreamy, wistful bit of pop genius.
_____________________________________

Nouvelle Vague aren’t really terribly YouTube friendly - a lot of the stuff on it is fairly ropey audience-shot videos of live gigs. As we know from theatre, pointing a video camera at something on stage tends to have abysmal results. There is, however, this rather beautifully done video for their cover of Dance with Me combined with an edited clip from Godard’s Bande à part

I can’t find the original on YouTube but this seems fairly representative.

One drawback of the live videos is that they can undermine the difference made by the new studio versions. That said, Goth nonsense though it may be, this live version of Bela Lugosi’s Dead is kind of fun if you like that sort of thing.


The band’s website has a few stream-able tracks, as does their MySpace, and iTunes has excerpts.
Posted by Andrew Haydon at 14:23

Disturbing, isn't it, when someone speaks directly to your thoughts? I was listening to these a couple of days ago, and was just thinking more of a fuss ought to be made about them.

I've been loving NV for about a year and a half, and everyone I played them too thought it was utterly bland and pretentious. At last, someone's on my side.

Hurrah! Glad someone else likes nouvelle vague, i discovered them whilst trying to find more songs sang by camille (who sings i believe in the guns of brixton and too drunk to fuck on their limited french edition, i recommend her albums particularly the songs "paris", "ta douleur" and "au port" to everybody whilst i'm on that).

I think Fade To Grey is the stand-out track, personally. A lonely girl busks the song you're listening to to an unresponsive tube carriage, only to find herself on a tropical island. What's not to like?

I'm afraid it does still strike me rather as Sade for a new generation, with added hipness thanks to the non-original material. Me, when I want to hear "Making Plans For Nigel" (dreary? how dare you!) given a seeing-to, I shall turn to its composer Andy Partridge's frightening deconstruction of it, which can be found on the CD Explode Together: The Dub Experiments.

Speaking of Sade gives me an ideal excuse to mention my idea for a new radical interpretation of a Peter Weiss play...

LOL! It's so simple it's brilliant!

Be interesting to come back to this in a few months, possibly, and see if anyone's experienced the same, almost unbelievably abrupt falling out of love with NV that I seem to have. I got into them in a big way when 'I Melt With You' got heavy rotation on some mobile phone advert or other... Then I was listening to their second album not long after it came out and suddenly found them excruciating. And now I can't listen to them at all. I love the triangulation of 'new wave' / 'nouvelle vague' / 'bossa nova' -- somebody needed to do it. And I'm usually at home to a winsome French chanteuse. But the appetite seems to have sickened and etc., in much the same way that the first sip of a Starbucks caramel latte is presumably ample. (I've never had one.)

Same with Rufus Wainwright, actually, who's not averse to a touch of francophonia.

Btw, if you haven't heard it, may I recommend the Horseflies' early 90s bluegrass rendering of the Cramps' 'Human Fly'? On the surface, quietly charming and not much more: but in due course, resistance turns out to be futile, and vice versa.

Why aren't I updating my blog instead of hanging around here droning on in the background of yours? I wonder.