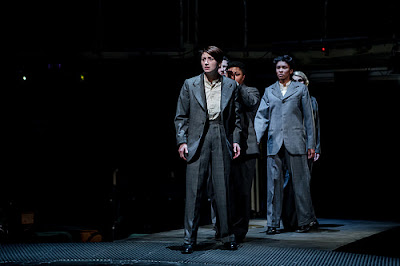 Avid followers of the theatre press (and literally no one else), will have noticed a recent tendency for senior Guardian critic, Michael Billington, to voice his concern that the theatre produced in Britain’s “regions” (i.e. anywhere outside London) is “timid”.

And, of course, the correct response to this is to disagree: Michael doesn’t see enough to know what he’s talking about; Michael doesn’t even go to most of the non-timid stuff *in* London, etc. etc.

But even that disagreement contains a certain amount of doublethink. It is possible to know exactly what he’s talking about and to shout him down all at the same time. (“The test of a first-rate intelligence is the ability to hold two opposing ideas in mind at the same time and still retain the ability to function” says F. Scott Fitzgerald. “The power of holding two contradictory beliefs in one's mind simultaneously, and accepting both of them... To tell deliberate lies while genuinely believing in them, to forget any fact that has become inconvenient, and then, when it becomes necessary again, to draw it back from oblivion for just as long as it is needed, to deny the existence of objective reality and all the while to take account of the reality which one denies – all this is indispensably necessary. Even in using the word doublethink it is necessary to exercise doublethink. For by using the word one admits that one is tampering with reality; by a fresh act of doublethink one erases this knowledge; and so on indefinitely, with the lie always one leap ahead of the truth” says Orwell.)

Which brings us to The Night Watch. It is simultaneously the most timid thing and the least timid thing imaginable. At once. It is even both “good” and “bad” (meaningless, taste-based, subjective value-judgements by me) at the same time. Neat trick, no?

On one hand, it’s a lesbian love story, which, crucially, doesn’t end in suicide, or all (or any) of the women going “back” to men. And it’s theoretically “really theatrical”. On the other hand, it feels as wholesome, cosy, and unchallenging as your average episode of Midsomer Murders (unless you’re an actual bigot, or a fourth-wall fundamentalist).

Looking harder at The Night Watch, outside of the production at the circumstances of production, we see a somewhat troubled history of retrenchment, rejigging, and last minute changes of designer and director. On this basis, we might charitably conclude that we should all just be thankful that *something* – and something perfectly respectable-looking – has turned up at all.

The piece tells the story of Kay Langrish (Jodie McNee – brilliant, and kinda like David Tennant’s Dr Who in her best moments, which I mean as a massive compliment) – moping about London post-war, and then, in a time-hop backwards at the interval, fighting fires and rescuing damsels in distress during the Blitz. By running the time-frame backwards, it allows us, the audience, to understand not only a fuller picture of the Chekhovian cruelties being heaped onto Langrish, but also a full knowledge of how it all pans out. And, Christ, all that could do with some sort of pre-warning, frankly: THIS IS AN EFFING SAD STORY, WATCH OUT! Or similar.

And, yes, by the end, despite a particularly silly, clunky bit of set-business in the second half, I was pretty much totally with the narrative by the end (I’d never read the book).

Which brings us back to doublethink. Could I plausibly come out and say “Yes! This is super!”? Yes. Of course. There’s plenty to pick out for praise here. Would I actually recommend seeing it to a good friend? Not *really*. I mean, I wouldn’t say “don’t”. It would maybe depend on their relationship to time and money. If they were wealthy and frequently given to affect boredom – not unlike a couple of the characters here – I’d probably say it’s worth seeing to pass the time. If they don’t have that much spare cash, and we’re talking about their one or two nights off a week, I’d say there were better ways to spend both.

So, timid? Who knows? I mean, Christ, as a white heterosexual man, I’m hardly strapped for “representations of myself” (I should add that I’m not remotely interested in seeing them either, although this is an arguably concomitant result of their mass, ready availability) and besides, I could identify just fine with Langrish – anyone who’s ever fallen in love someone they shouldn’t have fallen in love with could, even despite the fact she’s meant to be a raging posho (both she and Julia Standing (Lucy Briggs-Owen) were “at Roedean together” according to something someone says in the script). So, once again, I’m a) not ideally placed to critique any of this – except on class grounds, and, yes, I did find the insistence on Splendid Public-School-Educated leads As Grating As It Always Is. And b) I’m probably not the target audience.

I will say, from a purely theatrical point of view, it felt dated. Not horribly dated, but 90s Shared Experience dated. Which is to say, respectable enough, but hardly cutting edge. Which does feel like a pity. But not cause for galloping concern. Do some nineties retro-theatre vibes constitute timidity? Probably not of the sort Michael means. He’d probably find this bracingly modern. But then, along with doublethink, there’s also the matter of subjectivity with which to contend. “Never mind”, as they used to say in the Blitz. And the nineties.