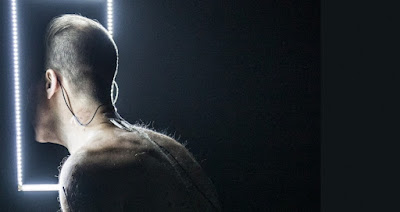 [SPOILER WARNING: THIS REVIEW WILL CONTAIN SPOILERS – BEST FOR PEOPLE WHO HAVE ALREADY SEEN THE PIECE OR ARE NEVER GOING TO... WHICH, LET’S FACE IT, IS EVENTUALLY GOING TO BE MORE OR LESS EVERYBODY...]

Just to give you time to look away, the press people have asked that we make sure we credit the producers of the show properly; I am more than happy to oblige:

In case some unwary parties are still letting their eyes dart all over the page, here’s my favourite ever clip of Slovenian philosopher Slavoj Žižek, here explaining why love is evil. Do watch, it’s only short and it becomes directly relevant later.

What is YOUARENOWHERE? Well, it’s seemingly a one-man show from New York. We, the audience, file into a smallish upstairs studio at Shoreditch Town Hall and tightly pack into the seven or eight rows of nicely presented raked seating.

The stage is quite small, quite shallow, bounded by blackout curtains on all sides with a white projection screen hung over the back wall and a small-ish rectangular metal frame hung at about head height in the middle of the space.

The lights drop to full backout. And flash back on again. And out again. Next time they come up there is a man standing in the space, on the stage. Violent white noises play. Or static noises. Or horribly amplified sounds of electrics shorting. The lights go on, go off, go on. Once we see two bodies in the space, the standing man, and another on the floor. The loud noises cover their coming and going. Sometimes when the lights come up the man is there. Sometimes not.

The guy – I’m guessing he’s Andrew Schneider, although he may or may not be playing “himself” in tonight’s show, either way; this guy – shirtless, black jeans, gelled down hair – says ‘hi’ to us. He goes through motions of behaving like this is maybe the start of a stand-up routine, or a rehearsal, or an audition. We get the general idea. The lights and sounds continue to torment his attempts. He has a few more stabs at saying a few more things.

I will say at this point, the lighting design and operation here is incredibly tight. Some of the best I’ve seen. Ditto the sound design, which isn’t just a matter of playing loud noises, there are also an awful lot of filters on the microphone. Schneider’s voice echoes around, delays, loops, and even at one stage appears to be recorded speaking backwards and is then played back forwards, if you see what I mean. The same technique that David Lynch used for the voice of “the little man from another place” in Twin Peaks. Staying in Lynchland, Schneider also lip-syncs all the way through [song title - 50s, like 'Blue Velvet' but not], drenched in blue light, kind of like a hairy Isabella Rossolini.

He gabbles at us, faster than we can really hope to keep up with, about quantum physics and Einstein’s special theory of relativity. About how if lightning strikes two ends of a speeding train simultaneously, only someone outside the train will be able to witness it as simultaneity. Someone on the train will experience one strike before the other. But will they get together? This man outside the train and the woman on the train... Will he leave a “Missed Connections” on Craigslist. Will she check Craigslist for the first time in an aeon and find the ad that relates to her?

Cue the recitation of the text from the Žižek clip above. Making me wonder what the sources are for everything else that Schneider has thus-far been saying. I’m guessing (I haven’t looked at the programme yet, maybe it includes full credits) that it’s all a tissue of quotation strung together with his own original material necessary to make the thing cohere – cohere in the sense of “artfully appear to fall apart at the speed of his choosing”. I suppose, being a qualified admirer of the old Marxist-Lacanian, I did wonder about the extent to which Schneider understood or agreed with what he was actually saying. How much of the text and texture of the show was in fact cool-sounding soundbites? What, if anything, were we meant to come away believing in? Probably not actual Marxism. In the best-case analysis, Žižek’s thoughts are included as part of measures to set up a reverse position to what Schneider actually believes in – love, apparently; and parallel universes. In this respect, YOUARENOWHERE is the ultimate reactionary art: in the same way that Tom Stoppard’s plays display such dexterity with wit and science to paper over the fact that he has nothing to say.

There are, however, two brilliant rug-pull moments in the show. And yet even these manage to trouble me. [These really are the SPOILERS] In the first rug-pull, the seemingly reliable back wall suddenly drops away to reveal another whole audience opposite us, watching a similar, identically dressed man, on the other side of the curtain. Not a new effect, but definitely the best execution of it I’ve seen. Has this been going on all the way through the show? It certainly feels possible. The two men enter into a (somewhat tedious, folksy) conversation/non-conversation where either they’re the same person or two different people with identical lives and tastes. Speaking in chorus, they, like poor mediums, list facts about themselves, so many of which are general truisms they can’t help but strike chords with the audience. Then the two audiences swap sides. We’re now sitting in the identical seats on the other side of the curtain. The dropped curtain has been reattached, and is gradually winched back up. We are perhaps inside the mirror: through the looking glass, as it were. We are the sheeple that have woken up. We’ve eaten the red pill. Or something.

There is a bit more filler, and then the second coup happens. The curtain drops again, and there is nothing on the other side. No performer, no audience, just empty seats. And, again, it’s kind of magic. At the same time, it’s magic for about as long as it takes to work out that the other side of the curtain must have been staffed entirely by volunteers [which, having had a think about, I'm actually fine with].

It’s interesting though, that this sort of visual theatre – and it is visual theatre, despite all the talking – really only ever offers a mirror to the critic. Or a kind of hopeless Rorschach kaleidoscope, into which you stare at the reflected tumbling pieces, but can only really make out shapes created by your own mind. As such, inevitably the sequence that resonated most with me was the sight of two topless men dancing to disco music under flashing rainbow coloured lights, two days after the Orlando shootings. Obviously, given that the show was first seen in January, this is pure coincidence; or perhaps – according to the logic of the show – was always destined to happen in some universe or other (and how this very fact makes me dislike the pointless logic of the show). At another point, we see the two men dancing about in an electronic maelstrom of jagged flashing lights in a symphony of white noise and static – almost a de facto ground zero of apocalypse culture signifiers. And we’re (I’m) reminded that it’s not even quite fifteen years since 9/11 traumatised America’s collective imagination irreversibly as surely as Hiroshima and Nagasaki did to Japan’s.

So, yes; I’ve been ungenerous, if scrupulously honest, about what the show’s synapse-frying modus operandi threw up for me. If I found it wanting in communism, humility, and a bit more than simple jaw-dropping fireworks, I’m at least prepared to concede that that’s entirely my fault for wanting them, rather than the show’s fault for not providing them. Sometimes one can just go to the wrong show for one’s temperament or particular mood.

In another universe I really loved it, and it was just what I was looking for. But the woman who was sitting on the train that I was only observing loved it. So not to worry.