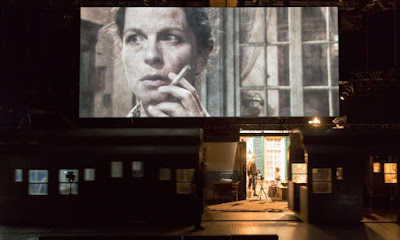 It is just six months shy of a decade since Katie Mitchell’s Virginia Woolf adaptation, Waves, opened at the National Theatre, and changed my idea of what was possible in the theatre irrevocably.

Waves was a kind of improvised “camera show”. An intriguing attempt to make something that looked like a film of Woolf’s The Waves using video live-feeds, lots of foley, and a stage full of props and fragments of set.

Mitchell’s camera shows evolved. Attempts on Her Life (2007) and Some Trace of Her (2009) at the NT, Die Wellen (Waves rebooted in German, 2011) and Die Ringe des Saturn (2012) at Schauspiel Köln, all remained within the context of the “improvised” aesthetic. However, for After Dido at the Young Vic (2009) the on-screen characters appeared in fully realised sets for the first time. But it was Fräulein Julie at the Schaubühne (2010) that really proved the game-changer. Set across several fully detailed, fully naturalistic rooms, and creating a kind of Ophelias zimmer-like counter-narrative based on Katrin, the maid from Strindberg’s play. This production subsequently reached Britain three years later in 2013, but by that point (or soon after) the mainland also had Reise durch die Nacht (Köln, 2012 – Duncan Macmillan and Lyndsey Turner after Mayröcker), Die gelbe Tapete (Berlin, 2013 – Turner after Perkins Gilman), and Wunschloses unglück (Wien, 2014 – Macmillan after Handke).

As such, it seems strange to now be confronted with a piece from August, 2014 (commissioned specifically to mark the centenary of the outbreak of WWI), following on a week after the piece from December 2015, and Mitchell’s entirely new Cleansed (NT, Feb, 2016). (Not to mention Lucia, which I bloody well missed). Which are all completely different. At least anyone trying to pin down “The Katie Mitchell Style” will be pretty much entirely thwarted by the extent of the aesthetic disparities between Cleansed, Ophelias zimmer and Forbidden Zone. (Writing this also makes me realise just how much of her work over the last few years *hasn’t* been seen in Britain, and what a loss that feels like...) As far as I’m aware*, Forbidden Zone remains the most recent of Mitchell’s camera shows, and her third most recent collaboration with Macmillan (2071 and a film currently in post-production since).

What’s interesting to me about the camera shows, is how the form relates to the content. It’s interesting to note that with the exception of only one opera (the “text” of After Dido was Purcell’s Dido and Aeneas) and one “play” (Fräulein Julie), all the other camera shows have been adaptations of novels. Until Forbidden Zone, which is essentially an adaptation of history. This is perhaps significant, insofar as, with the novels (or at least literary biographical texts), you have a sense of an already mediated text to be translated onto stage. In Forbidden Zone – created by Macmillan from texts by Hannah Arendt, Simone de Beauvoir, Mary Borden, Emma Goldman and Virginia Woolf – this seems/feels to be less strongly the case. Here it is a form/format that just works being applied to something written/created specifically for that form, rather than an adaptation per se.

What this means is that on one hand we have an absolutely virtuosic display of the form in full flight, and on the other hand, the opening for some critics to wonder what the form itself means now, or what it’s for. I find that the form makes a wholly strong case for itself, here as much as anywhere. Of course, there will be “liveness” zealots, who just don’t like things projected on screens, and can’t see the point. And that’s their privilege, I guess. Similarly, there’ll be people who haven’t seen much since Waves, who quite miss it being that. Which I can’t tell them not to do.

My own reaction to Forbidden Zone was mostly a kind of adrenalised excitement at the sheer velocity of the event. Watching from the fifth row, with the screen looming high above you, and with a fairly close up view of the actors and technicians scurrying around on stage in the myriad rooms (designed by Lizzie Clachan), the whole thing feels kind of overwhelming. Even facts like it having a video designer (Finn Ross and 59 Productions), two sound designers (Gareth Fry and Melanie Wilson), and even a lighting designer (Jack Knowles) seemed to pass me by in the moment. The thing seemed to have such a completeness and a logic to it, that even as you looked at the myriad component parts, it seemed like they had some sort of eternal or inevitable quality – that they had always been just so. The idea of people actually putting this edifice together was too brain-frazzling to contemplate, even as you were made completely aware that that’s precisely what was happening right in front of your eyes.

As such, I’m quite envious of Maddy Costa’s take on it for Exeunt, where she argues that “there is a metaphorical function to the filming that says so much about how history is constructed ,” which was very much a part of how I thought about Wunschloses unglück, and perhaps consequently didn’t feel quite so much here.  [Although – on the matter of how history is constructed and by whom – while loosely researching the facts behind the (real) lives depicted in the piece, I was startled by an article noting that Clara Immerwahr actually died in her son’s arms, not alone, floating in a garden pond like John Millais’s Ophelia, ironically.]

The story of Forbidden Zone is summarised as follows: “Clara Immerwahr, wife of the famed chemist Fritz Haber, is profoundly disturbed when her husband’s research leads to the development of chlorine gas during the First World War. Over 30 years later, her granddaughter, a scientist committed to finding a poison gas antidote, faces similar despair.”

It’s at once powerful and maybe a bit too neat (and see above, as to whether it’s been made yet neater still). But it is powerful. I mean, we could all sit about and quibble about whether we’d rather it were three hours long, or had a bigger cast, or more dialogue, or different arguments or perspectives. What’s in front of us presents us with (in my case) hitherto unknown facts, and an effective, chilling reminder about not the horrific realities of war, but – if anything – the even more chilling unrealities, the hypothetical calculations and reports executed in nice suburban interiors, and warm, clean laboratories. It also, obviously, looks at the subject from a female perspective.

Now, it’d be disingenuous of me to ignore the fact that when a (female, German) friend saw this in 2014, she sent me the message: “I’d love to tell you what I thought of The Forbidden Zone, but unfortunately I am a woman, and so I have killed myself instead,” into which one could read a certain resistance to the idea that a focus on suicide would necessarily be everybody’s first choice as a means by which to examine and/or resist (ostensibly “male”) warfare. Although, I was perhaps reminded more of a kind of existential, tragic Lysistrata – with life rather than sex being withdrawn. Or, yet more bluntly, the same exchange of life for “fuck” in the radical feminist Crass formulation in ‘Women’. Suicide is here, as elsewhere in Mitchell’s work, positioned more (at least partly) as a moral choice in response to patriarchal structures (see also: Ophelias zimmer, Lucia di Lammermore, Wunschloses unglück, and perhaps further back to Wunschkonzert and before). I’m not as against the piece as that (or at all, in fact), but I do also see how others might be. But this gets into such a difficult argument about how we wish Art to function, that this review would turn into the beginning of a book without an end.

Hopefully it doesn’t look cowardly for me to a draw to a close here (about 1,400 words in already) with something that’s a bit platitude-y. On the level of reviews-as-reflection-of-emotional-experience, I really loved Forbidden Zone, but possibly couldn’t articulate why immediately. I was also maybe slightly troubled by the fact that the serious subject had basically been steamrollered by the exceptional execution. And, beyond that, that it would probably be possible to nit-pick about the content and why each moment had been chosen, and whether it presented too fait an accompli (for my tastes), or whether there was a different meditation on/approach to what was presented that hadn’t occurred to me.

So, yeah, I really loved it, but couldn’t put together an ironclad intellectual case that I agreed with as to why. Or, maybe it could, but perhaps since Slovenia (or even Belgrade), I’ve been maybe feeling a bit alienated by Anglo-political theatre. Of course, this is ultimately much more to do with just hating England, and particularly London; as pretty much everyone I can think of does now. Unless they’re “trying to look on the bright side” and mostly concerntrating on sunny says and whiskers on kittens, etc. The gradual, creeping sense that massive political changes have happened all around us, and haven’t really been fully explained; the general sense that the whole model of UK culture has been changed, cleverly, so that expectations are being lined up to sit alongside the US model of capitalism, and far further from the European model. And that Europe itself is being changed too... That and the ongoing shadows of the wars that we’re currently involved with and the spectres of the wars that we’re about to become involved in...

Maybe my overall reaction is basically down to an unwillingness to do the empathetic work involved in really feeling the depression of the subject matter, or possibly, the form (at least for me. In this instance. But not in the case of Wunschloses unglück) got between me and the content/thinking-about-it. Dunno. Still, I did actually *really love* this show. And I’m still thinking about it...

[and without wanting to get back into that thing about “all online reviews being about reviewing”, I find it fascinating that this is absolutely not the review I’d have written if I’d had 4/500 words and a star-rating on the night. And that one wouldn’t have been “wrong”, but at the same time this one feels much more true “going forward” (as the awful corporate phrase has it...)]