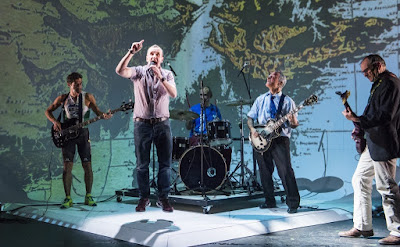 The basic concept of Minefield is remarkably, deceptively simple. On stage are six veterans from The Falklands War/Guerra de las Malvinas. Three Argentinians, and three men who fought for Britain (including one Gurkha, originally from Nepal). It’s like next-step verbatim theatre, and this is far and away the most successful example I’ve ever seen.

I first came across the work of Lola Arias at the SpielArt festival in Munich nine years ago, where she and Stefan Kaegi – of Rimini Protokoll – had created a show called Soko Sao Paulo (fourth show down in that linked round-up). When I saw that in 2007 it completely blew my mind: Verbatim Theatre that had cut out the middle persons of writer and actor, and instead just used the actual people as the performers! Imagine! Over the following years, I saw *a lot* more Rimini Protokoll shows, so that aspect of their work stopped surprising me. (I also saw some *actual plays* written by Arias at the Thalia in Hamburg once, but I digress...)

So, on a lot of levels, I’m just really jealous of a lot of people for whom this was their first encounter with this sort of work. I will add, though, that this is an exceptional piece even within the genre. I think the combination of subject matter, the chosen participants, and the intrinsic “minefield” of putting soldiers from formerly opposing armies on the same stage to collaborate to make a piece of postdramatic theatre (yes! This is definitely some of that) is always going to result in a much more satisfying, dramatic piece than, say, if they all had some connection to the oil industry in Kazakhstan. [Reading back through that review, it was also really interesting to reflect on how being placed on the Royal Court’s stage, which fair towers over its stalls audience compared to the almost-informal end-on space in HAU 2, confers a different kind of “authority” on the performance, which the piece negotiates and diffuses beautifully. Although *why?*, when the stage itself is no different to a music hall, is also interesting to consider. Perhaps music hall design did actually confer much-needed crowd-control authority on performers...]

What is striking, though, is just how well the familiar dramaturgical strategies work here. Arias (and/or Kaegi)’s method seems to be: first identify the main topic that will be discussed – here, the 74-day war in the Malvinas/Falklands in 1982. (“We took longer making this piece!”)  But then the second thing they do is find participants who have a very definite second *thing*. A counterpoint to the first subject. In veterans of a war now fought 34 years ago (odd to think WWII had only been over for 37 years when the Falklands War started) these other aspects of their characters range from their jobs – one has retrained as a psychologist, one as a special needs teacher – to their hobbies: one of the Argentinians is the (really very good) drummer for a Beatles tribute band (!).

The way that all these aspects are tied together, in short almost presentational little scenes, is a kind of genius accumulation of narrative, counter-narrative, digression, and detail. We hear about how people came to join the army – the stark differences between outright conscription in a military dictatorship and de facto conscription in a dictatorship of capitalism – but also of the relative youth and lack of training of the Argentines. We hear about takes on the other country and the other country’s soldiers. In one astonishing sequence we see a 57-year-old man giving a performance as a young marine doing a drag striptease to a heavy metal cover of 80s classic ‘Don’t You Want Me, Baby?’, which was apparently how the Royal Marine task force amused themselves during the long voyage out to the South Atlantic. The use of live music throughout is incredibly effective and affecting.

But, obviously, the main meat of the thing is six men’s experience of war. Not, as one of them points out, “modern warfare”, but the last “old-fashioned war” (“old-fashioned” circa 1914 – 1982) where men with guns hid in trenches, and planes were flown by people sat inside them, not sat in Utah. There’s video footage from an old-ish documentary in which one of the (British) soldiers now on stage in front of us breaks down in tears telling a story about an Argentinian soldier dying in his arms. He’s told the same story maybe fifteen minutes earlier without flinching. The piece shows us the passage of time, the past and present both right in front of our very eyes. One of the Argentinian soldiers – notably muscular and sporty now – talks about a past of drug addiction and uncontrollable anger. War, we reflect, even in short doses, does seem to leave people in a good way. The piece, perhaps mercifully, doesn’t give us a moment to reflect on just how much trauma this must mean the human race has had to process and endure throughout history. Not at the time, anywhere, although it’s kind of present and implied throughout. It feels like Minefield manages this sort of field of implication brilliantly. There’s a choppy rhythm to the dramaturgy that feels like a refusal to give in to the consolations of an uplifting ending, or dramatic high-points. There are those, definitely, but there’s also a workmanlike way the piece has of just dismantling a set-piece when it’s finished, and moving on to the next thing. A sense of inexorability (which felt familiar from other pieces), that here feels like it reflects an ethos behind soldiering.

This is a vital, valuable, heroic, necessary piece of theatre. I desperately want to avoid saying out loud all the commonplaces that the piece so neatly side-steps, but, yes, it does remind us that soldiers (on each side – I think we routinely dehumanise both, now) are not only people (who knew?), but also that they continue to be people long after they’ve ceased to be soliders. And that wars tend to be fought by very young men – in their teens or early twenties. And, if you avoid getting killed in the war, that’s a long time to live with the after effects. Hell, it says *a lot*, and says it powerfully, beautifully and brilliantly.

Not in complete agreement with the effectiveness of the piece, but it's a great review and no matter what you think of the work, exciting to see something so artless and artful at the same time on the RC stage.