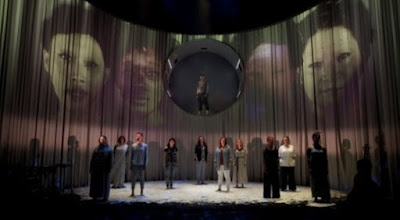 Primarily, it should be stated that neither the opinions nor the “objective” observations of this male critic have any real place in an assessment of this work. Even as a feminist – one influenced by Butler, and with great scepticism toward binaries and gender essentialism – this holds true.

As such, I commend you to the views of Maddy Costa ahead of my own.

Now, I’m not just saying all this because “I didn’t like it”. It is important that those disclaimers go first, because in many ways Opera for the Unknown Woman felt as culturally alien and unfamiliar to me as anything I’ve seen at the Volksbühne. And I would say that, in part, that’s down to me being a bloke.

It’s initially difficult to pin down *what* it is that feels so unfamiliar about the work. I mean, I’ve seen modern operas before. I’ve seen science fiction before. I’ve, y’know, read works of feminist thought before, and I’ve seen Katie Mitchell’s two Environment Lecture shows (I won’t claim to be much better informed than that in matters ecological). I might not be an authority on any of these things, but they are a part of my everyday landscape. (perhaps #everydaylandscape). What’s different here, I think, is firstly such an apparent level of sincerity that you (I) scarcely know where to put yourself (myself), and secondly, that there is an almost complete lack of any dialectic whatsoever. Or, rather, the thesis is Everything Outside The Theatre, and the show seems to stand for both antithesis and synthesis, since it is wholly revolutionary and therefore unable to resolve the problems of the thesis/the world without overturning the world.

I think that’s what this is.

I put this analysis before a description, because, in basic terms, simply, starkly describing what actually happens on stage, or the plot, has the potential to sound A Bit Silly otherwise. And there’s something fascinating about that. I mean, Sci-Fi *is* always faintly silly, and it kind of always has to be serious about itself. I wonder if this is why it’s so rarely seen on stage as such. Because on film you’re let off the hook of having to process your response to its self-seriousness in real time breathing the same air as the performers.

So, rough plot outline: at the beginning, some inter-planetary elders (all women), appear projected on the cyclorama curtain around the rear of the stage, and talk about saving the last inhabited planet, as interplanetary elders often do. I think to this end they sort of send a traveller back in time, who symbolises and becomes (?) the daughter of ten women on the stage who probably represent all the women on the planet. There are parts of libretto about violence against women, and bits of the time-traveller’s (?) narrative about enviromental catastrophe. They’re not really dramatised, or part of a conventional dramatic situation; instead they exist more as kind of lyrical, almost liturgical refusals of the status quo.

The music (co-composed by Wilson and Katarina Glowicka) is frequently very beautiful. It is a mixture of electronic, recorded and live – percussion, violin and ‘cello. I notice myself coming up against the same knee-jerk reaction that I have to Sleaford Mods (as per ÜberŠkrip), that if the sounds aren’t made LIVE, I sort of worry about it.

Similarly, the staging here feels more indicative than actual (if that makes sense – what I mean is, I imagine, given more money and a larger space, it would look correspondingly different, if following the same sort of lines).

But, ultimately, I suppose it’s the message that I find difficult. Specifically, its entirely non-specific call to non-violent action regarding male violence and environmental catastrophe.

Reading Costa’s postscript this morning was helpful, largely because in pinpointing her own anxieties about violence she absolutely locates my own opposite concern about the left’s complete refusal of it. She approvingly cites Audre Lorde’s lecture title, The Master's Tools Will Never Dismantle the Master’s House, and while, as a man, I’m in no position to comment on having my house taken down, I will note as a leftist that in general terms the best way to dismantle most structures is with the use of more or less precisely the same tools as those with which they were assembled. One just needs to be organised about how you use them (houses, in fact, being a radical exception, since using a cement mixer to take apart cement simply won’t work; but look at anything that’s simply been screwed together, and you’ll probably agree that using a screwdriver isn’t the worst suggestion for taking it down. And so it may prove to be with neoliberalism and armed resistance).

The narrative of the past fortnight, in crude terms, has been: Orlando, Jo Cox, Brexit. And the corresponding emotional trajectory has been something like: left-liberal anguish at the proliferation of guns in the USA (with a side order of British complacency) giving way to shock and outright surprise that we turn out to have an armed far-right of our own. For the first time, perhaps ever, I kind of understood why an American might be so keen to have a gun of one’s own. And started wondered when and why The Left had become so anti-armament. (I’m blaming the false equivalence of the idiot hippies.) After all – lest we forget – in Germany in the 1930s (the period most frequently, if inaccurately, held up as analogous with our own troubled times), there was an organised, armed Communist Left opposing Hitler’s violent street thugs. No, they didn’t prevent Hitler’s leg-up to power from the ruling Conservative elite, but they did at least resist it in the strongest terms possible. It is their struggle, and not the peaceful protests of the liberal left, who were not murdered in the first concentration camps and so sat passively by as the Third Reich murdered 6,000,000 European citizens, that is of eternal credit to Germany.

Of course, the narrative above is entirely Anglo-centric. The struggles of oppressed peoples around the world – oppressed, as often as not, with tacit aid from the prevailing power structures that also oppress the British working class, and which have surrounded “Brexit” from the get-go, rendering the choice wholly meaningless – have been entirely absent from our news cycle.

And, of course, of course, it’s less than a parlour game to sit in a nice flat in Manchester on a rainy Saturday morning in June arguing for armed revolution in a theatre review. But such is Opera for the Unknown Woman, and such are the questions it raises.

The most inspiring thing I’ve read in the last week is Lenin’s postscript to the first edition of State and Revolution*:

This pamphlet was written in August and September, 1917. I had already drawn up plans for the next, the seventh chapter, on the “Experience of the Russian Revolutions of 1905 and 1917.” But, outside of the title, I did not succeed in writing a single line of the chapter; what “interfered” was the political crisis – the eve of the October Revolution of 1917. Such “interference” can only be welcomed. However, the second part of the pamphlet (devoted to “Experience of the Russian Revolutions of 1905 and 1917,”) will probably have to be put off for a long time. It is more pleasant and useful to go through the “experience of the revolution” than to write about it.