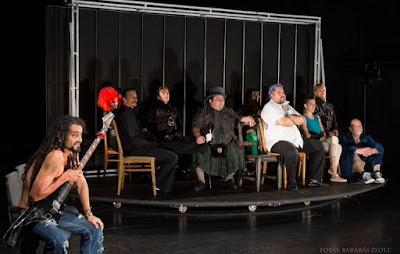 I’ll be honest. By this point in MITEM I really wasn’t feeling it. I mean, yes, sure, in the current financial climate, saying, “Yeah, I was a bit bored of being put up in a hotel room in Budapest, with really warm weather and endless free tickets to international theatre, with my flights paid for...” Of course it sounds bad. And ungrateful. And not too kind to one’s hosts. But, yeah, as festivals go, MITEM is about as distant and alienating as it gets. I now understand why even my Hungarian critic friends were giving most of the programme a very wide berth, and staying away in droves...

I mean, there’s the political dimension, of course: Hungary is run by a Very Right Wing party, in close collaboration with an actual Far-Right party; one of the things they did in their first term in power was forcing out the artistic director of the National Theatre and replacing him with someone more in line with their own ideological persuasion.

Part (most) of the reason I was interested to come to this festival was to see what an International Theatre Festival looks and feels like in a far right country. How do you square nationalism and ultra-nationalism with internationalism?

Well, one of the interesting features was that *a lot* of the “foreign” directors – at least from Eastern Europe – were “ethnic Hungarians”. In the case of Jovan Sterija Popović’s The Patriots this happened to work to MITEM’s advantage – they happened to land a brilliant show. In the case of Bocsárdi László’s Vízkereszt, vagy amire vágytok (Twelfth Night, or What You Will), not so much.

I mean, this was a *fine* studio production of Twelfth Night. It totally got the story across. It even got a kind-of ersatz “Shakespearean” feel across, what with the odd breastplate on Sir Toby, and the usual copious drinking. Elsewhere, it also had a burnt-out hippy playing guitar over everything and Kati Kovács’ Viola dressing “as a boy” in an electric blue leatherette jumpsuit and massive DM boots. So, y’know. A patchwork. Tonally it was squarely pitched more at the slapstick and vulgarity end of the spectrum. A kind of Grosz-out 12thN., if you will.

But, well, the dynamics didn’t exactly make any of it feel *urgent* or *vital*. And it wasn’t deconstructing the play to any real end. Other than to stage the story. And if you already know the story backwards, what’s actually left? I mean, this would be a pretty sound choice of production to tour schools studying the play. It definitely tells the story clearly and gives robust characterisations.

What was strange – perhaps poignantly, given the celebratory date – was just how easy it is to make Twelfth Night *deeply* unlikeable. I mean, the drunk men of Olivia’s household really are boors of the highest order. This production’s really tapped into that unbearable drunk-men thing. Meanwhile, what’s Olivia, really? Here, she’s vain and self-obsessed without really giving any hint as to why anyone would fall in love with her. Orlando is so self-obsessed and happy to mansplain the world, that it’s literally impossible to believe that Viola falls for him in any way at all. And Viola here doesn’t really even bother to pretend she has. She’s fine as a woman living by her wits in an improbable scenario, hopping from scene to scene with nothing more than self-preservation in mind, but love? Not here. Nuh uh.

And that’s the production, really. It’s got a nice, but under-used (and slightly too small) metal-wall-on-a-revolve, which looks nice and aids some admirably quicky changes, but in this transfer venue seems way too marooned in the middle of the stage to really mean anything, or achieve any sort of an effect.