[pretty impressive trailer. do have a watch]

Two cars drive toward each other at high speed. When it becomes clear that neither will swerve, the drivers slam on the brakes and the cars screech to a halt only metre apart. Men with guns jump out of one car and begin yelling at the driver of the other. A jeep screeches up behind the car containing the two armed men. Armed masked soldiers jump out with machine guns. Still yelling at him, they smash the windscreen of the other car, trying to drag the man inside out. He is bleeding from the face. They are still smashing his windows and hitting him with fists and rifle butts when the police arrive. One of the armed men goes over to the nearest police officer, shows him identification, perhaps they already know each other, they mutter a conversation about procedure. The man from the car is dragged into the back of the jeep and driven off. One of the armed men drops a sheaf of papers into the passenger seat of the smashed-up car, gets back into his own car, and drives off.

The scene stops, the lights come up, the hangar-like showroom where we’re watching this smells of burnt motor oil.

A performer explains that this is the first account of the arrest of Milan Smolnikar in Depala Vas on 20 March, 1994, given at a subsequent trial in 2003.

This is the third Act of Republika Slovenija, Mladinsko Theatre’s anonymous, “verbatim theatre” piece marking the declaration of Slovenian independence 25 years ago.

To go back to the beginning, in Act one a former member of the Slovenian security services talks about how one afternoon, as he was working in the offices [of the secret police?] a higher-ranking colleague needed help counting out something like €17 million (in today’s money). The scene starts off with the chap (the entire programme is anonymised: “All the authors of the performance will remain anonymous. In this context, the individual isn’t important. What is important is the state.” – so apologies for lack of names here) painting a picture of the room, projected via live-feed throughout. Occasionally during his story he’ll point to a cupboard or chair in the on-screen picture. You get a real sense of place from his evocative little watercolour. And there’s something charmingly incongruous about the idea of the secret policeman who also paints. His story, which is summarised in surtitles, is still very funny, and the details are all captured. One afternoon vast, vast sum of money, kept in used notes of every imaginable currency, was put into suitcases in the offices of the security services and just taken away. The retired officer estimated there was at least as much again left, stuffed into the cupboard.
“Weren’t you sworn to secrecy?” he is asked, deadpan, at one point. “Well, secrets only last so long” he laughs. The audience laughs too.
He’s a tough-looking, unphased guy. He looks exactly what ex-secret service people look like. He’s probably seen some things. And he seems really nice. An unlikely whistleblower. And you don’t really worry if he’s going to be *ok*. So that’s something.

Act two is most like the sort of verbatim theatre we’re used in back in Britain. Six men, mostly wearing grey suits, played by actors – indeed, the most Slovenian moment in this act is where this concept is painstakingly introduced as a convention, with a surprising number of caveats about how the men they are playing are also playing the roles of themselves and their office. The script they are performing is a declassified transcript of a meeting that took place between six very high-ranking Slovenian officials only a short way into the establishment of the Republic of Slovenia. Milan Kučan, the then president, is there; on stage, in the meeting. And on the night I saw it, perhaps only the piece’s second or third performance ever, he was also in the audience, and interviewed by television cameras outside afterwards. Which seemed incredible to me. Also portrayed is Janez Janša, then the defence minister and subsequently twice prime minister. (Familiar to art fans from The Janez Janšas, the performance trio who all changed their names to Janez Janša.) The subject of this meeting is the fact that Slovenia is deeply involved with the illegal supply of arms to both Bosnia and Croatia. Since Slovenia has recently declared independence, and then even more recently signed up to a raft of UN Resolutions, it has to extricate itself from the arms trade, stop training soldiers from these countries, and somehow not offend its neighbours. It is essentially established, that everything should be deniable, and maybe they won’t look very hard. It also seems quite clear that prime minister-to-be Janez Janša is *a bit of a shark*, to put it mildly. You’re basically left in doubt that the then defence minister of the newly independent Slovenia was party to, and profited massively from, an illegal arms trade to Croatia and Bosnia Herzegovina during the civil war*.

And then, we’re moved to the kind of showroom/warehouse opposite the theatre. It’s got a surprisingly large seating rostrum to accommodate the audience who have just emptied out of the theatre. (Also, can we just take a minute to admire how seamless a transition this was. Essentially an interval, and then we all return to different seats in a different room. So simple it’s brilliant. Never seen it done before. (The nearest you get is with that funny Castellucci/Hölderlin thing at the Schaubühne.))

After the sequence I described at the opening the stage is reset and the action is played out again, this time according to the version of events given in the testimony of one of the secret servicemen. Still the five cars on stage, still the machine guns and pistols, and shouting, but this time in strict accordance with the law, and with the “suspect” definitely in possession of the papers he claimed were planted on him.

The sequence plays again, according to another witness.

The meaning of what we’re actually watching kind of warps. At the same time, you feel that you get closer to the truth of the matter, but at the same time, feel the meaninglessness of the court proceedings where the truth of these competing realities – magicked into actual stage realities for us – can really only be guessed at. I mean, it’s pretty obvious, really. But, as this representation of these farcical proceedings, you also get a sense of the slippery process of justice here. In fact, it resembled nothing so much as a couple of series of the excellent British police corruption serial Line of Duty. And, like, can you imagine how that would feel? And, I don’t think I’ve oversold the sheer visceral fact that THERE WERE FIVE FUCKING CARS ON STAGE. And SHOUTING MEN WITH GUNS. And BRIGHT LIGHTS AND LOUD MUSIC. It’s quite important to convey that you leave this piece have seen a fucking good show. And really pumped. A kind of sense of injustice; adrenalised.

Now I’ve spent far too long sitting on this review, when really it should have been done overnight.

But, Jesus, yes! This! This is how you do political theatre. This is how you make a MASSIVE GESTURE as a state theatre. Forensic, explosive, and using a live unresolved legal issue about the country. And making it as your piece to “celebrate” 25 years of independence. Crucially, there is no feelgood resolution here; even while the piece itself is a joy, what it’s saying is just left hanging, a vital sense that as a country, we need be better. The state is/should be an expression of the people’s will. If we are the state, then we need to hold it to account far better.

As a Briton watching this, I have to say, even though this is Slovenia beating itself up, it’s incredibly inspiring. You take away more hope from Republika Slovenija than any number of tribunal plays at the Tricycle, and corrosive satires in the West End. Similarly, seeing the actual former president there gives some idea as to why. This is a country small enough to hold its politicians to account. There isn’t quite such an overdeveloped carapace of police and press between the politicians and the people.

I mean, yes, I’ve fallen a bit in love with Slovenia, and maybe I’m seeing the glass-half-full interpretation, but even so, the evidence suggests that it’s not just the infatuation talking here... 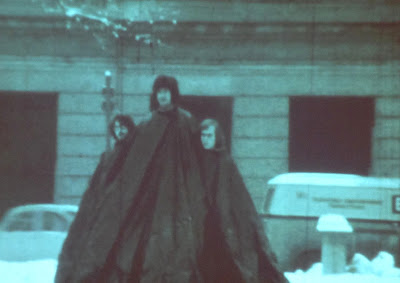 [CORRECTION: moved up from below-the-line. The pic above is not the Janez Janšas, who did recreate the Mount Triglav performance in 2007, but the “original” performers of the living sculpture, members of the neoavantgarde movement OHO – David Nez, Milenko Matanović and Drago Dellabernardina. The performance took place in Kongresni trg, Ljubljana in 1968.]
Posted by Andrew Haydon at 18:58

A little correction though: the last photo you posted it's actually not the Janez Janša's, which recreated the Mount Triglav performance in 2007, but the "original" performers of the living sculpture, members of the neoavantgarde movement OHO - David Nez, Milenko Matanović and Drago Dellabernardina. The performance took place in Kongresni trg, Ljubljana in 1968.

Thank you! Now noted above-the-line too. :-)