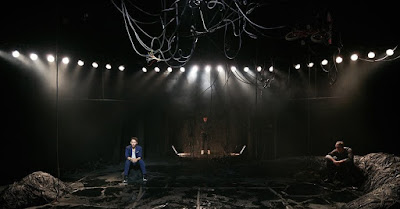 There’s a repeated motif in Gary Owens’s new play, in which the effect of fear on the male body is described thus: “your arse grips tight shut, but the muscle in your cock goes loose, and you really have to clench not to piss yourself.” This also describes the structure of the piece: the first half is very tight, the second half goes loose.

It’s also remarkably unpleasant. Which is fine, in the abstract, I guess. It wasn’t exactly what I was looking for yesterday afternoon (or ever). But I will say, it’s remarkably well-done unpleasantness, for the most part. The piece consists of three monologues, although very occasionally the speakers interact with each other, but it’s largely direct-address story telling. One of the speakers is telling the story of himself, aged 12, being brought up (badly) by his lone mum, and getting bullied and beaten up. It feels perfectly observed, and it is incredibly horrible.

Basically, after this poor kid gets his dog murdered by his area’s local hard lads [some real manipulative Amis-style bathos and sentimentality there], he goes off the rails a bit, and ends up riding down the dual-carriageway on a seven-year-old girl’s stolen birthday-present bike; pissing about by slowing down in front of a family car; which also turns out to be stolen; and then being rammed off the bike by the car thieves [more Amis-y stuff about teeth being smashed. I seem to remember teeth being a Drowned World thing as well...], taken back to their flat, and tortured to death, in the manner of a video game called Killology.

Another speaker is the inventor of this game, Killology, who is an unsympathetically imagined, thinly-drawn, public-school sociopath – albeit, interestingly, one from a cynical ex-union father, who made a killing in industry, hiring out protective suits for cleaning out industrial-something-or-other, having successfully sued his former employers for not using them. The idea behind Killology is that no one who plays about video games much cares about the wandering around bits, so he invented one which just focusses on torturing and then killing. With extra points for being inventive.

The last speaker is the murdered boy’s father. At the start – he’s the first speaker – we hear about him gaining admission to an expensive luxury flat with a colleague, and then successfully pretending to leave again, so that when his colleague leaves with the concierge, he’s in there, waiting for the occupant to return.

The occupant turns out out to be Mr Killology, and the dad is there to sort-of avenge at least the inspiration for the manner of his son’s death. He is going to watch the video of his son’s torture with the man who he blames for its genesis, and then put him to death in the same way. (Basically, imagine Denise Fergus turning up at Jack Bender’s condo with a big bag of rocks)

[That’s the first half. In the second half, Mr Posh Killology knocks the dad out, the dad gets put away for attempted murder. In a secure mental facility, the dad resurrects a vision of his son who’d carried on living, who in turn narrates getting a job in the NHS, and then nursing his dying father in his final days. In the very last moments we’re shown the “real” son, back at age 15, behaving like a shit, stealing the little girl’s bike, and setting off on the path that leads to his torture and murder. Posh Killology guy has moved to America and sends a child he adopted back to the agency.]

And, look, now I’m explaining it, it does all come together intelligently and sound quite satisfying. And it is undeniably compellingly written. And, yes, in its unflinchingly sadistic depictions of social and emotional deprivation and violence, it is undoubtedly bang on the money. I don’t even think it’s “bad” (whatever “bad” means). I just didn’t like it. I don’t suppose I was meant to “like” it. And it makes me wonder about myself “liking” Iphigenia in Splott. (Which I really did.) What does that mean?

In reviewing terms, this is really stupid territory, because – having not “liked” a thing – you then find yourself scrabbling round for “reasons”. And then, with those “reasons” you (generally) build a case against the thing being “good”. Except, in the main, I think this is “good”. Just not “like”able.

Although, I then worry that I’m overcompensating for not-liking it, by being too nice about the construction. Basically, some bits are a lot stronger than others. The narrative stuff is very, very well done. The philosophical angles raised by the characters, less so. I mean, they’re only the characters’ moral universes, not Gary Owen’s, but. And I know that the characters are characters, not ciphers, but.

I mean, just I don’t know what we’re meant to do with the piece at all. I tend to agree with the sociopathic creator of torture video games that video games really aren’t to blame for violence or torture. The dad finds one instance in the internet of humanity’s prior incapacity for violence (at sites of American civil war battles, they found lots of unfired rifles, suggesting that Americans didn’t used to be as fond of shooting each other), and proceeds to deduce that wars are now more violent because soldiers have played video games. This is patently nonsense*, but who wants to side with a public-school psycho who ends up the play torturing his own dementia-riddled father?  Also, what is watching this play meant to do for our humanity?

Similarly, sure, some people in some working class neighbourhoods are also violent. And violence probably does sometimes breed more violence in some people. And this is a convincing story of some of that. But presumably Gary Owen isn’t suggesting that we ban video games and incinerate anyone who’s ever been brutalised (by anything, real or imaginary) to stop the spread of the infection. (Because, quite apart from anything else, who will incinerate the incinerators, right?) So is this just a dark story in the midnight of the human soul, to just point out to us that just about everything is particularly shit, and there’s literally no way of even remotely improving it, and not one shred of historical proof that anything’s ever been even slightly better? I mean, it doesn’t offer much else. It certainly doesn’t suggest solutions (although I can imagine thinking it were cheap if it tried).

So is it just *art*, in the way that, say, Kafka and Beckett are art? I think it probably must be, except that it’s so tightly clothed in the outward appearances of social realism (which isn’t art), that it feels on first sight like it must be those.

As always, in this sort of situation, I kind of want to see a German production to sort it out for me. Rachel O’Riordan’s production is well done, and horribly intense where it can be. It’s set in a kind of dank, Aliens-esque set (Gary McCann), but even this still feels more like an abstract set for social realist thinking than something that adds a further dimension. Rather – with an actual pink seven-year-old’s bike tangled up in electrical wires of the ceiling – it seems intent on reinforcing the realist parameters of a dreamlike story, rather than fragmenting them/adding something that disrupts the claimed reality.

So, it seems that what’s ultimately worried me most about Killology are questions of taxonomy and genre. Which definitely isn’t how I felt when I came out for the interval yesterday afternoon (at that point it was more “a bit sad about the sad story”). But, I wonder if it’s a point worth making that I think “*just* upsetting people” isn’t really a very effective strategy (at least, it isn’t with me). Because, a) people have defences (generally flippancy) that they can use to avoid being upset (see intro.), and b) because people can deconstruct the means used to create the upsetting thing, and end up criticising the thing that’s tried to upset them, rather than the things they could more usefully be upset about.

There’s probably also a lot of stuff about Tragedy and agency that’s pertinent here too, but I’m going to stop here, I think.

So, Killology: it’s very well written, it’s pretty horrible, I didn’t like it, that doesn’t mean it’s not good. I didn’t know what it was for. I don’t think things have to be “for” anything. But I do like to have a sense of what’s being asked of me. Which I don’t think I got.

Or: Ok, let’s say Killology is about cycles of violence, and the question of how you stop them once they start – which, let’s face it, isn’t the most remote question we could be asking at the moment. I think I find its thesis – which I took to be you can’t stop it, it’s inexorable, horrible, depressing and real – both credible and pointlessly pessimistic. I mean, yes, on one level that’s right. The if the entire history of humanity is proof of anything, it’s that. And what does the play show us? That being the victor sucks, and so does being the loser. Using force to put an end to the misuse of force never puts an end to the misuse of force. And not using force to put an end to the misuse of force allows the misuse of force to continue. There is no right answer. Life is a sewer. It is irresponsible to look away, and it is grotesque to look at it – and with the chance that just looking at it gets you involved, but you’re involved even if you’re not looking... And so on and so on.

AT LEAST WITH IPHIGENIA IN SPLOTT WE COULD JUST FUND THE NHS BETTER.

So, yeah: Killology: probably right, but – as per the rest of the play – winning by having the worst argument seems like no sort of victory at all.


Darker Neon sees it the exact opposite way round to me, and writes a much better review for it.


* I mean, wars are now mostly fought by drone “pilots” anyway, who are absolutely just some cunts in Nevada playing video games. And, yeah, sure; boo hoo, Grounded. But compared with being murdered by some cunt in Nevada, the cunt in Nevada feeling bad about it afterwards is pretty small beans.
Posted by Andrew Haydon at 19:03

Yeah man, what really irks me is the lack of compelling thesis and argumentation. That's totally what I see drama for.