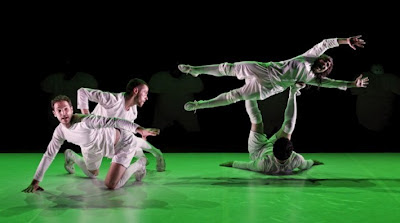 I like Pierre Rigal. Not personally; I've never met him (this isn't one of *those* reviews). But I like the work he's made that I've seen. I first came across Rigal at the Gate when I reviewed his UK debut Press for Time Out (5*/6, since you ask).

Press went on to do good business at Sadler's Wells and Rigal returned to the Gate with the innovative and consequently underestimated show Micro.

This, my third Rigal show, impressed me primarily because it is so unlike either of the other two I've seen. Without a programme/ticket/poster/whatever I'd have never guessed that it was the work of the same man, which often endears artists to me (at least when the work is still also good. People whose previous work I've liked suddenly deciding to make utter crap tends to endear them to me less).

So, what's the new stuff that Game Over brings to the table?

Compared to French choreographer Pierre Rigal's previous works, Press and Micro, Game Over is perhaps less innovative. That said, it still feels stuffed enough with inventions to more than keep an audience occupied for its 75 minute duration.

Surprisingly, for a piece that is inspired by a (n apparently very tense) football match – the 1982 World Cup semi-final between France and West Germany, which the FDR won on penalties – the net effect of Game Over was oddly akin to emerging from a nice long relaxing bath.

The pace is set by quite a trippy, pleasant opening 'number' in which the four performers – invisible: wearing black in the inky depths of the unlit stage – basically move eight small lit squares around – a bit like a hi-tech version of the opening titles for the '70s BBC Schools programme Watch (the brief titles in that clip start at about 0.52). They make some geometric patterns, and some patterns that perhaps suggest more abstract, cubist pictures – maybe even of sportspeople, tho' that could just be the power of the title's suggestion.

Soon after, these 'light-squares' are revealed to be little screens (probably iPads or similar) and they begin to show the (French) broadcast of the football match in question (surtitles are provided neck-craningly high above the performance space). This sort-of sets up the piece's nominal theme – although if I'd not read the blurb, I do wonder what I'd have made of it. This set-up achieved, the performers place the iPads on the floor at the front of the stage and begin to perform, using the screen-glow as footlights.

The next section (that I nearly just called, "the first section, proper") is the bit perhaps most like the thing you'd imagine if I told you this was some modern dance about a football match. That is to say, the four performers ( _ _, _ _, _ _, and _ _), in synch, in tandem, and solo, reproduce bits of the football match. First in a line – the poetry of the kicks, the run-ups, the other things footballers do – then supporting one another, allowing the goalkeeper's dives and saves to be performed in slow motion.

From this section the game gradually seems to mutate into an odd kind of rugby – or at least, the performers don padded body suits; somewhere between those used in American Football and Sumo fat-suits. Thus protected, they charge at each other and throw each other around – there's even a brilliant little homage to that famous repeated hold-and-drop sequence from Pina Bausch's Café Müller, except here it's not the same dancer getting up again, but the others all getting dropped on top of each other.

After this they costumes are discharged and re-worn upside down as kind of monstrous heads. It looks a bit like an slightly abstract dance-theatre version of the wild rumpus in Where the Wild Things Are.

More things happen. The Wild Rumpus dies down (it wasn't *that* wild anyway, the dozy Air accompaniment saw to that). I think the performers retreat to regroup and maybe get their breath back (sorry for my lack of notes on this show, btw – I wasn't meant to be reviewing it. Exeunt's esteemed editor DBY was. I was just his plus-one, until he didn't make it on time.. :-) ).

The next bit (you'll have gathered by now that this show is *Very* Episodic Indeed) involves a bunch of very small light cubes. Each is about the size of dice from a board game and glows from the inside. One performer scatters them and them crawls about trying to pick them up again, putting them on his back, as an illuminated exo-spine. The gradually evolves as more performers come on with some glowing red score boards, which turn out to be made out of red versions of the little light cubes. At one point the crawling performer even puts some in his mouth making his grin glow red. By this stage I have absolutely no idea what this has to do with football whatsoever, but then I don't really understand football any more than I understand contemporary dance, so my coordinates were liable to be a bit skewed anyway. 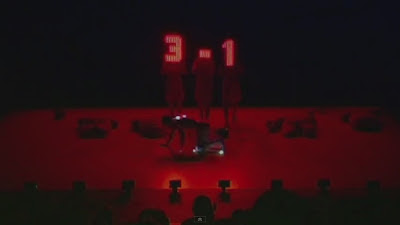 The last thing I've got in the brief list of elements from the show that I scribbled down as soon as I got out is:


“A magically animate mashmallow dolphin walking on its hind legs”.

This is a pretty accurate description of one of the final images in the piece. I should now attempt some sort of extended musing on the relationship of football to the arts (much, coincidentally, as Michael's just done with cricket over at the Guardian - 'typical', a cynic may remark, 'that Michael's chosen a game that no one in mainland Europe will ever try to do differently'...).

Well, the last piece of football related art I saw was The Saints, which, I saw at Hamburger Bahnhof (interestingly – to me – with a German dramaturg who was quite bemused that we Brits cared so much about the '66 final, when for Germany the '74 FDR defeat of the Netherlands was much more important to their national psyche – they quite like the British, they can't stand the Dutch, apparently), although to have been more usefully comparable, the latter piece should perhaps have been about Britain's defeat at the hand of Argentina in 1986. 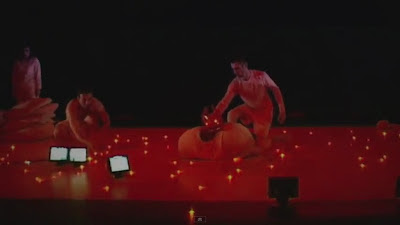 Blimey. I really am getting bad at conclusions. Punchy or otherwise. I'm tired. I'll sleep on it. Maybe there'll be one here in time. All the information's there now. Possibly not all the analysis; although I'm not sure I'm going to come up with anything terribly whizzy. I suppose the problem is, I don't really like snappy conclusions. They seem a bit glib, somehow. I cringed at the one I stuck at the end of the Time Out review of Press for form's sake (although, Jesus, Haydon; they're a lot less self-indulgent than this. Who do you think you are now? Bret Easton Ellis?)

Tell you what, you think of a nice, neat-football punning conclusion.