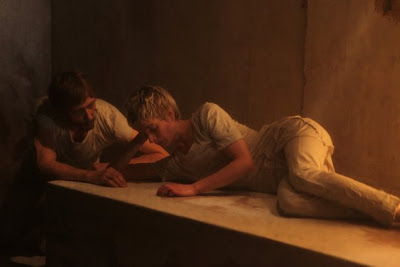 There are plenty of problems with Unbroken, Natalie Abrahami’s dance’n’theatre staging of much of Alexandra Woods’ new adaptation of Schnitzler’s La Ronde.

The pre-show state involves sitting in front of the blacked-out stage with lights shining uncomfortably in your eyes listening to horribly insistent, repetitive minimalist clicks and bleeps. It actually makes you feel quite ill. Eventually they stop shining the lights in your eyes, turn the “music” down a bit, and dim spotlights come up on the faces of the two performers, Darren Ellis and Gemma Higginbotham. They perform the whole of the first scene – an encounter between a “Rock Star” and a married woman after a gig.

You all know La Ronde by now, yes? God knows you should do. It is the most over-adapted go-to destination for anyone who can’t think of their own structure for a play. Unbroken is the third La Ronde in London this year following Georgians at the Arcola and Joe DiPetro’s adaptation Fucking Men. And, Christ, there’s a fourth coming to the Riverside Studios in March. No doubt there’ll be revivals of The Blue Room and Sleeping Around after that.

The original depicts a series of ten sexual encounters between various members of fin-de-siecle Viennese society. They are identified by occupation, relationship status or sexual persona – whore, soldier, young wife, young husband, “little miss”, Count, etc – and at the end of each encounter, the previously unseen participant goes on to the next scene and a new partner. The result is both a cynical social commentary and an acknowledgement of taboo promiscuity and infidelity.

In Unbroken the sexual merry-go-round is reduced to six characters of each gender. The characters are identified by name and with the exception of a “Rock Star” are mostly defined by their relationships with a very woolly idea of their social relationships to one another. Moreover, by reducing the number of characters to six each way, the play totally loses the sense travelling through the life of a city. It virtually reduces its scope to an over-evolved “adultery in NW3” play.

There is a bigger problem at work here, however. In common with Hare’s The Blue Room, the male and female in each encounter are played by the same performers. Needless to say, this probably works best if both performers can offer a number of convincingly different personas so that each character they play seems sufficiently differentiated from the last. Failing this, as Higginbotham and Ellis both largely do, it would at least be something if both performers could reasonably convince as human beings.

Unfortunately Ellis lets the side down here too. Ok, that’s unfair, Ellis does come across as human, albeit the most crushed, asexual, insipid, sexually uncharismatic man you could imagine. Higginbotham is pretty, perky and fun so each encounter ends up looking like a man pleading needily with a woman well out of his league. Imagine Michael Rosen trying to get off with a crop-haired, boyish, younger Kristin Scott-Thomas – without even an ounce of wit or confidence to fall back on. Irrespective of the character she is playing, in every scene Higginbotham has to fight desperately hard not to look like a desperately bored young wife putting a brave face on a terrible mistake. How anyone is supposed to find it credible when the couples eventually do get it on is beyond me.

Which brings us to the “dance” bit of the show. Director Natalie Abrahami has chosen to, well, “illustrate” or, er, “interpret” the sex bit of each encounter with a bit of contemporary dance. Stop giggling, it’s a perfectly good idea. In theory. It was after all George Bernard Shaw who described dancing as “the vertical expression of a horizontal desire” (although contemporary dance about modern sexual practices might more fairly said to be the horizontal expression of a vertical desire). God knows, I’ve seen plenty of contemporary dance that has spoken volumes about sex, sexuality and sexual desire, sadly, this wasn’t it.

Ugo Dehaes’s choreography for Unbroken, however, seems to be suffering from performance anxiety. Too many expectations have been placed on it. It is timid and tentative, and it doesn’t really seem to know what it’s doing. On one hand, since these dances are explicitly *sex* there appears to have been an initial nervousness about whether they should “look like” sex or should seek to represent some more abstract sense of desire and pleasure. The result is a bland mish-mash of the mimetic and the interpretative - the mimesis looks tame, while the interpretation looks twee. It’s all a bit face-holdy and scented candles. Even when one character appears to rape his ex-girlfriend, the act itself looks a bit airbrushed.

Indeed, the overall feeling here is one of earnestness. Reading through Woods’s script afterwards, one notices that the parts excised from the script are often the parts where a character makes a sexually explicit reference. Unbroken looks like it’s been put together by a creative team who have never had great sex in their lives, or are too shy, intellectually dishonest or disapproving to admit it. As a result we get a bland sexless selection of scenes of unsexy people interspersed with dances about sexless sex. Granted the characters of La Ronde have a certain cynical listlessness about them, but this doesn’t necessarily mean that the sex is necessarily desultory and stale. Moreover, the dances here don’t portray that either.

The choreography and design both have their moments, but would have been far better without the burdensome context placed around them, which they totally fail to live up to. This is a play about sex made by people who seem to have made so that they can show it to their parents and grandparents without embarrassment.
Photograph by Manuel Vason
Posted by Andrew Haydon at 23:36

I'm a radio producer with the CBC in Canada. I'd like to talk to you about your blog on England Very Nice People.