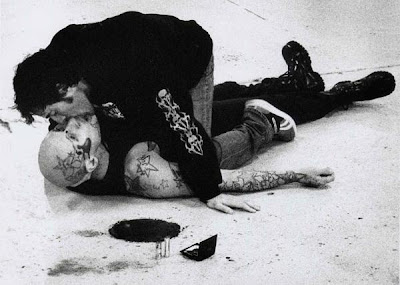 Giselle Vienne’s first collaboration with iconic writer Dennis Cooper, I Apologize is a perfect marriage of dance, text, puppetry, music and sheer intelligence. A young man (Jonathan Capdevielle) paces listlessly on a brightly lit white stage among a large number of blood spattered plywood packing cases. He opens one and fetches out life-like mannequins of 12-year-old girls dressed in a fetishistic schoolgirl outfits. Dennis Cooper’s voice reads out a description of marital violence. Peter Rehberg’s soundtrack – a kind of distillation of terror into noise – builds to an appalling pitch of intensity.

Anja Rötterkamp dressed in the same short skirt and heavy fringe as the schoolgirl dolls and wearing vertiginous shiny black S&M heels circles the stage, her movements suggesting permutations of violent sex; climbing the towers of packing crates, crawling on all fours, spreading and closing her legs with agonising slow-motion deliberation, arching her back as if in continual agony and ecstasy. Her counterpoint, Jean-Luc Verna - shaved head, red contact lenses, metal teeth and a body covered in tattoos - looks utterly terrifying and satanic. His stage presence, however, is strangely graceful, striking poses that quote Nijinsky combined with moments of jerky, intricate nightclub-dancing; at once menacing and magnificent.

The fragments of text to combine with the onstage action to increase the sense of tension and gut-wrenching fear, opening up incredibly disturbing worlds of violent, abusive sexual fantasy. In one, a man talks with a computerised voice answering his online advert for a young man who wants to be sexually abused. The man questions the voice about being abused as a child, clearly gaining sexual pleasure from the details, demanding more and more explicit information.

More dolls are unpacked, seated and threatened, many left to sit ratcheting up the already disturbing mise-en-scene. Scenes suggesting the torture, sexual abuse and murder of young girls combine with Rötterkamp’s disturbingly seductive, sexualised dance of submission. Capdevielle puts scary animal masks on the doll’s faces, while elsewhere he enters wearing a Jar Jar Binks mask - the effect is at once extraordinarily creepy and very funny.

Every moment opens multiple narratives and suggestions. The performances, the music and the text intermingle to create a powerful exploration of the darkest parts of the human psyche. Rather than making the audience piece together a story, or search for meaning, the performance opens a space where the intellect is fired by multiple stimuli while the nerves are assaulted by visceral sensation. The viewer is completely surrounded by and immersed in a nightmare, while every new element creates and refines its possible meanings. The overall effect is shocking, shattering; leaving one’s body adrenalised and the mind racing. It is the single most exciting, thrilling night I have ever spent in a theatre, both physically and artistically. Despite the horror, I Apologize also somehow manages to be extraordinarily beautiful, with the final moments achieving a sense of catharsis. An incredible achievement.
_____________________________________________

No videos of I Apologize on YouTube that I've been able to find, but if you want a rough idea of Peter Rehberg's work, this clip from subsequent Vienne/Cooper collaboration Kindertotenlieder gives some idea - play very loud indeed for full effect. 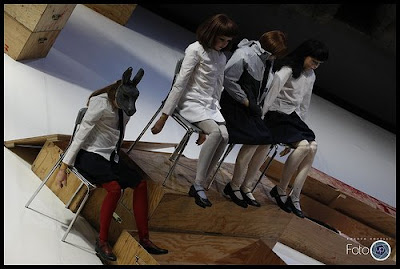 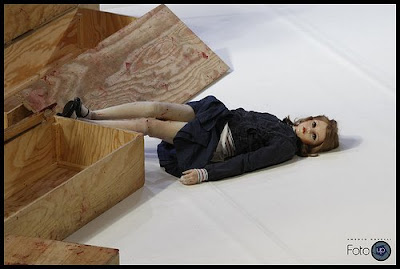 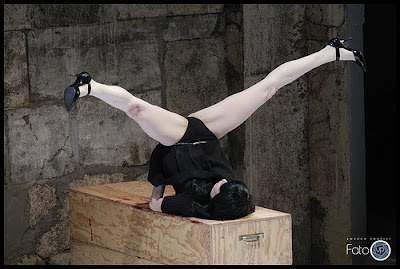 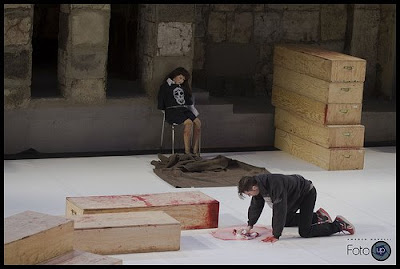