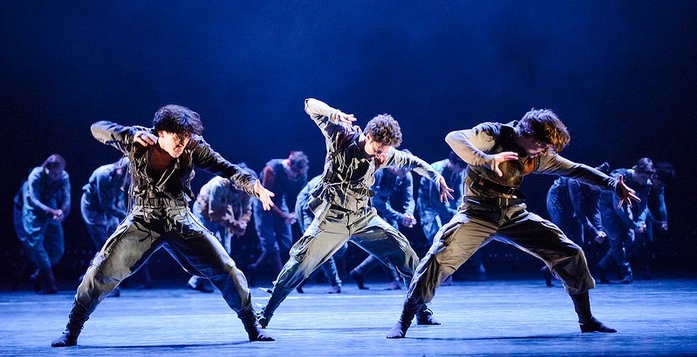 I know zip about ballet. I’ve seen stuff by Cedar Lake Ballet and Pina Bausch, but I get the impression that doesn’t count. The main reason I went to this mixed programme by the Royal Ballet at the ROH was to see the new Hofesh Shechter piece, Untouchable, but I was also curious to see the other two pieces. George Balanchine is famous enough that I’d heard of him before, and I quite like Mahler, so, yeah, interesting. The new work by Hofesh Shechter (receiving its first five performances) is sandwiched between an antique from 1946 (Georges Balanchine (d. 1983) – now on 20 ROH performances) and a fossil from 1965 (Kenneth Macmillan (d.1992) – 104 ROH perfs).

Untouchable is Shechter’s best work yet. Or rather, the first half of it is his best work yet, and the whole still blows Balanchine’s wit and whimsy off stage and makes the Macmillan look precious and irrelevant. Perhaps it is to do with the framing. The last two Shechter pieces (Political Mother and Sun) were full-length commissions shown at Sadler’s Wells, I had press tickets, disgustingly good seats, and the pieces were playing to legions of adoring fans. Here, in more staid surroundings, viewed from a £20 day seat (C20 in the Stalls Circle: a bloody good seat, occasional restricted view notwithstanding), and with the benefit of a live orchestra, it felt far more powerful, dangerous and incisive playing to potential-sceptics than his work does in front of the usual army of acolytes (indeed, the fat old ladies next to us took the advice of the philistine at the FT and buggered off between intervals one and two. And very welcome the extra space was too).

The work itself is, well, *really* like his other stuff. The same trademark loping movements, closely aligned with the “gaga” style of Batsheva, that use of his dancers as something more like a herd, the diagonal lines, the picking off of individual dancers, an overall look somehow reminiscent of a Native American Jewish Wedding (if you see what I mean). What differentiates it, and to my mind makes it his best piece yet, is partly the concentration of his ideas and themes, music and movement feel condensed here into at least fifteen minutes of sheer intensity (like I say, I was so blindsided by its first half, that I don’t think I properly get the second. Would love a chance to have seen it again). It seems to function on several different levels of stage reality all at the same time, both a representation of some unspecified conflict – past, present and/or future – and at the same time, is like a representation of what the dance from the future commemorating that conflict would look like: a kind of Mr Burns for the Isis generation.

I’ve always had a lot of time for Hofesh Shechter’s music too (written with Nell Catchpole). I mean, sure, the thought that it’s not unlike the music on Spooks used when they only have two minutes left to foil an Islamist bomb plot did cross my mind: it shares the same use of “middle-eastern” chromatic scale combined with a driving Western rock sensibility. But *obviously* it’s better than that. It’s music with real colour, light, shade and intricacy. Vocal samples, static and white noise compete with a stripped-back orchestra and massively enhanced percussion section.

But overall it’s the intelligence, the perspective, the sense of something communicating something that really makes it. I’d say that, thanks to its use of endlessly communicative tropes and legible symbols, this theoretically mute piece of work makes its point incredibly clearly. It’s like a protest at mankind’s endless war with itself, and, as such, is both unanswerable and profoundly dynamic.

Balanchine’s Four Temperaments gets away with being on the same programme largely because it comes first. As such, it gets away with being a perfectly witty, charming starter. Knowing, as I say, zip about ballet, I was pleasantly surprised by the more “modern” moments, which seemed to hint at some continuity from GB to maybe Bob Fosse. (Indeed, the no-costume costumes, plain Bob Wilson blue backdrop and reflective floor made me think of A Chorus Line for probably no discernable reason.) The movement worked well with the music, and the GODAWFUL GENDER ESSENTIALISM OF (some, older) BALLET was only really bad as opposed to unbearable. The ballerinas looked like they’d eaten reasonably recently, so all good. (Having written this, I looked the piece up online, and totally recommend the ROH’s brief context-and-criticism page which mades me retrospectively like the piece a whole lot more. 1946! Christ!).

For me, (and, yeah, I know, who needs my untutored musings – if some shit who’d never once been to a theatre before decided to start reviewing by having a go at Katie Mitchell, I think I’d probably make a point of never reading anything they wrote again, and rightly so – however...) Macmillan’s Song of the Earth – a choreography made for the Mahler piece of the same name – was less successful. For a start it’s fifty years older than the Shetchter piece that precedes it, and it shows (again, the ROH page on its history is invaluable). Worse, though, despite the obvious skill of both dancers and orchestra, it also feels pretty twee. And, yeah, the gender thing feels far more enforced with that mixture of sentimentality and brutality which one kind of expects from old ballet.

I’ll admit, I’m not much of a traditionalist. I’d be with the Green Party on abolishing the Grand National, for example. This “Song of the Earth” now seems as dated as someone talking in 1960s BBC English explaining gender roles. It’s strange to consider that this was made the same year as Edward Bond’s Saved. But, also, the whole “universal” story of death stalking a bloke, taking him away, and leaving the woman all sad; well, I guess it’s touching on an individual level, but since Shechter had just given us the end of humanity or something, putting a relationship drama directly after can’t help but make the latter look somewhat solipsistic.

So, yes, entirely subjective. Really surprised that the Balanchine piece hailed from as a early as 1946, knocked out by the Shechter, and slightly irritated by the Macmillan, probably because I don’t appreciate its significance as a turning point in the the form.

Nevertheless, it was great to see all three pieces, and to finally get round to seeing any ballet at all. And to learn that ballet scores seem to function much more like sheet music than play texts. Now quite interested to learn what extent individual dancers, like actors or musicians, can alter a part within a fixed choreography, but much more excited by the piece which didn’t feel like it belonged in a museum (possibly a museum of gender roles from the last century).


[If you want an alternative view, Clement Crisp in the FT seems to have written pretty much the exact opposite review, albeit as a series of text messages; apparently too grand for full sentences.

His whole consideration of Shetcher is this: “In the middle of the evening, Untouchable, a 30-minute commission, the first for the Royal Ballet from the Israeli choreographer Hofesh Shechter. Here we watch 20 corps de ballet dancers from within the company clad in fatigues. Design clichés of dry ice to fog the air and beams of light from above. A bare stage. The percussive bombast of a drumming soundtrack from Shechter and Nell Catchpole. Mass angst. Regimented grudge-nursing. Anguish by numbers. Nasty attacks of the sullens; Shechter’s blatancies of means and manner and matter.”

– which, if nothing else, makes me feel a whole lot better about my write-ups of the bits either side. His appreciations of the two “masterpieces” are, if anything, even more unconvincing.]
Posted by Andrew Haydon at 09:51

Oh Andrew. It's perfectly fine to have not seen "proper" ballet before - but to say "The ballerinas looked like they’d eaten reasonably recently, so all good." is uncalled for.

I'd hazard a guess that these dancers are probably collectively the healthiest and best feed group of people you've seen on stage all year. Of course, ballet has a well documented history of unhealthy eating, but companies and training institutions have made great strides to correct this. This century, the company would have a whole host of medical staff on board making sure all of the dancers are taking care of themselves (physically, mentally and yes, dietarily), and most - if not all - of the company members would have done nutrition studies as part of their training. The theory behind taking care of dancers bodies has changed a lot over the past half a century - they train and eat like athletes more than they ever have before.

Choreography has changed a lot between Balanchine and Shechter - and the dancers, and the institutions that hire and support them, have changed a lot, too.

No, I agree. They did indeed look healthy.

Am still pondering my response to this whole thing. But I'm certainly not the only person by several (that I know of) who found both the non-Shetcher pieces possessed of staggeringly unreconstructed sexism.

It's an interesting thing with a live artform -- we can kind of accept that old films are *a bit sexist*, but because they're old, because they've already been made, you can kind of just accept a certain amount of "well, that was then". With something that can essentially only happen live -- like this performance of these choreographies -- to have precisely the moves of 1946 or '65 recreated is something totally new to me.

Very different even to someone repeating the more off-colour bits of Noel Coward ("Women should be struck regularly, like gongs") in an otherwise production of 21st century sensibilities...