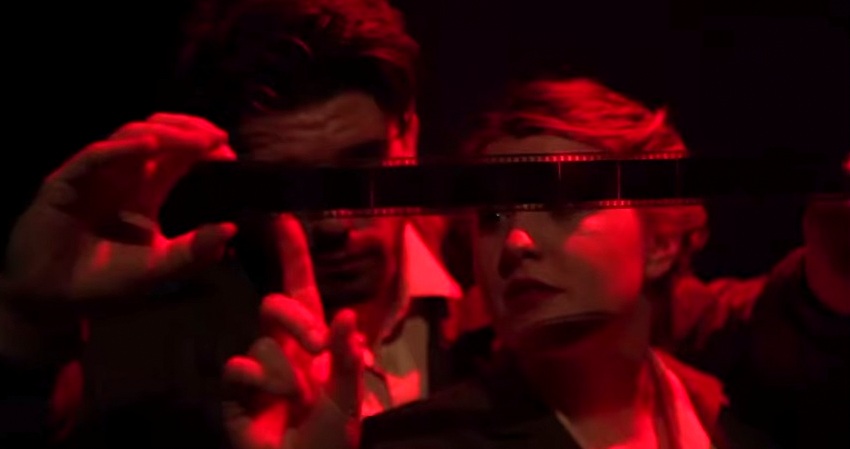 First things first: theatre is an entirely subjective thing. Lyn Gardner has already written a “best case scenario” review of this show. I fear I’m about to do the opposite.

Shooting With Light is a piece of “physicsl/visual theatre”. Idle Motion are a young company. Very young. About halfway through I realised that accusing them of simply ripping off Complicite’s Mnemonic would be idiotic. I saw Mnemonic just after I graduated from Leeds. In 1999. Probably before any members of Idle Motion had started secondary school. So, on one level, why shouldn’t they make retro, nineties theatre? My generation certainly spent far more time than necessary remaking lots of 1970s theatre (Mike Bartlett’s first acting role at Leeds was playing the lead in Howard Barker’s 1976 play Claw, for instance).

On this level, it’s really fascinating to watch Idle Motion’s work as, I think, a product of the “theatre studies-ification” of theatre. I should say, I have no problem with either theatre studies or devised work. But I do have a theory: that there is a drawback in the initial work it can engender (I say all of this with the full expectation that if Idle Motion stay together as a company they will make much better work than this in the future). Put simply, if you’ve ever seen any visual theatre made by recent graduates, you’ll have seen *a lot* of this show before. It’s almost like a Mr Burns scenario: a lot of people my age saw Mnemonic, became theatre studies teachers, and over the years have passed on their memories of it as tools to make theatre, so that now their pupils, and their pupils’ pupils probably, have a kind of default methodology that results in them making Mnemonic without realising.

Nominally, Shooting With Light tells the story of Gerda Taro, a German socialist war photographer who died, age 26, shooting the Spanish Civil War. Her story is told through two prisms – firstly that of her partner’s brother decades later trying to track down his brother’s remaining work (said partner also photographer), and secondly, essentially as a shadow of that brother. It’s remarkable to see a piece whose entire top-tier creative team is female create a piece which so firmly frames the story of this remarkable independent woman in terms of the men around her, gives her so little of a voice of her own, and even fails her at the Bechdel test.

Also remarkable is how *at no stage* does anything we see on stage ring even remotely true. It’s a odd, because it’s a totally watchable piece of theatre on many levels, and it’s entirely successful story-telling, but what anyone says? Or how they say it? Or the *movement*? No. The whole thing needs to be looked at, gutted, and pretty much re-started. Maybe the lighting is good, although again, it’s evocative more of great lighting in a black-box student theatre show than of Europe in the 1930s. On the subject of Europe in the 1930s, this is a story about a German and a Hungarian living in Paris and then Spain. Now, I get that accents can be a no-no. On the other hand, a bit of variation from the uniform “heightened RP” that the cast use would be good: the overall effect is like watching the Famous Five improvise Land and Freedom. With added *movement*.

And, ARGH. MY GOD. The *movement*. I see from the programme that Dan Canham was their “movement consultant”, but, no, really, I think the company need a lot more than a “consultant” if they’re going to stick this much movement in. I’m not an expert, but I’d say the company’s main problem lies in the purchase their feet have on the ground. They are virtually rooted. Much of the “movement” is from the waist up. And a painful amount is floaty, slow motion stuff with a lot of people watching their own hands (moving, of course, in slow motion) with their mouths slightly open to suggest wonderment (at their own hands moving?). Perhaps I’m being unfair, but it struck me that they needed to see *a lot* more contemporary dance, and also to do a hell of a lot more physical training, before bothering to include *movement* because they felt they had to. There’s nothing wrong with thinking that dance is an ideal medium through with to present a civil war. There is everything wrong with making the people watching (me) think that that’s the worst idea anyone’s ever had. At least the combination of music and photographs was so much stronger, that the five figures running to and fro on the stage and then freezing was largely ignorable.

Finally, re: characterisation – it seems the fact that Gerda Taro went to finishing school and had a boyfriend are the two key aspects of her life that made it into the play. She comes off as someone who should be called Bunty in a P.G.Wodehouse musical. And, similarly, for someone imprisoned in Nazi Germany for her socialism, her values – except for the occasional bit of lip-service – were much more akin to those of a depoliticised noughties arts graduate than someone committed to the workers’ struggle.

Saying all of this feels grotesquely unfair, and more like kicking puppies than reviewing theatre. *Of course* I’d rather be encouraging. Of course, I think Lyn’s review is *also* right. I want to say “of course Idle Motion are a talented company, and...” but I’m not sure what their talent is. Not really acting, not really movement, and not really creating good dialogue. The mise-en-scene is well realised, but not original or radical. It is indeed a brilliant story that they’ve uncovered, but I wish even a scintilla of the anger, and passion, and *need to tell it* had come across. Instead, it felt like pragmatic next-step “content” on a road of relationship-building and Arts Council Application Form filling. However, people only get better by doing, right? So I am glad they’re doing.