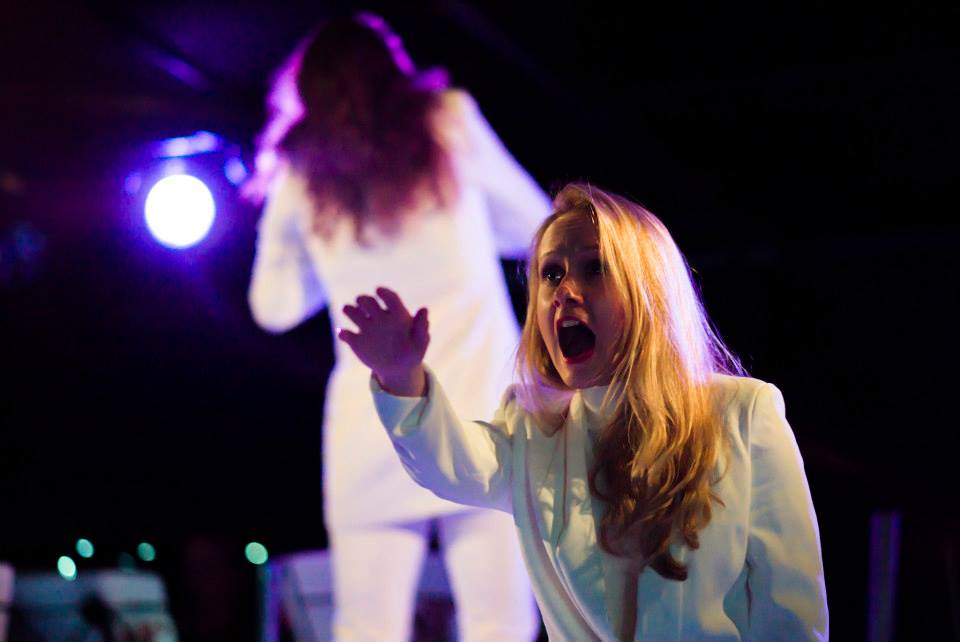 Shadwell Opera are in fact presenting a double-bill of musical performances under the title Speech Acts, so before the break we also get a performance of Stravinsky’s musically brilliant, dramatically inert, entirely bonkers and somewhat reactionary L'Histoire du Soldat (The Solider’s Tale, text by Swiss writer C. F. Ramuz), the conclusion of which is:

You must not seek to add
To what you have, what you once had;
You have no right to share
What you are with what you were.

No one can have it all,
That is forbidden.
You must learn to choose between.

One happy thing is every happy thing:
Two, is as if they had never been.

Which is, like, WTF? on any number of levels, and no kind of philosophy at all. That the thing came out the year after the Russian Revolution makes it doubly or triply perplexing. The cast all have at least one demonstrable area of enormous talent, although, while having Soldier played by a dancer makes for some excellent movement sequences, one might wish that he’d also trained as an actor. On a similar level, while Temi Wilkey (the Devil) having a more “performance artist”-based skill set is interesting in itself, it also means that all four players seem to come from more or less mutually exclusive productions. The design is also a bit odd. As far as I can make it it’s directed by Jack Furness, who also directs Little Hill, which is a surprise, as Into the Little Hill is about as crisp, atmospheric, ambitious and realised as you could hope for.

Part of the reason for its “timeless” quality is the fact that Crimp has effectively the tale of the Pied Piper and mixed it with the horrific resonances of Nazi anti-Semitism: there is every doubt here that “the rats” that the townsfolk want rid of are actually rats at all. “That one is holding a suitcase, that one is holding a baby” sings the child of the minister in charge of their extermination. And where, for me, the score of Written on Skin slightly got in the way of the humour of the libretto, here Benjamin’s music is perfectly matched to Crimp’s dark vision: swelling and subsiding with unexpected textures and noises, different instruments suddenly taking the lead, or else the whole band creating atmospheric pulsing or jagged soundscapes. *Obviously* George Benjamin is one of Britain’s foremost composers, so the fact that the music is subtle, resonant and incredibly clever shouldn’t come as a surprise, but this honestly does feel like one of the most successful marriages of music and text in a contemporary opera I’ve heard. The whole achieves a kind of almost claustrophobic intensity of purpose that neither words nor music would manage on their own.

Nonetheless, the piece absolutely still reminds us what a great writer Crimp is. Spare, stark, and with an unerring knack for under-the-skin creepiness. The Pied Piper (what is Pied in this case? Oh, colourfully clothed, according to Wikipedia. Funny the things you don’t question until you’re 39...) is here replaced by “a man with no eyes, and nose nose and no ears” discovered by the minister in his house peering into his child’s cot. The final abduction of the children is rendered as a vision of them all trooping off to burrow into the little hill of the title: “And the deeper we burrow, the brighter his music burns”. Somehow incredibly sad and horrible, but a chillingly brilliant evocation of children possessed.

Furness’s production really is excellently, minimally staged. The piece is only a two-hander, with soprano Emily Vine playing the eyeless man and the minister’s child, with contralto Jess Dandy as the minister (and minister’s wife? – there weren’t surtitles, so occasionally it was a tiny bit hard to follow). They’re stood on a tilted white disc that can only be about three metres across, tops. The small orchestra/band behind them, and, excellently, noise from the bar next door filtering through the rear door (just behind me in the back row) whenever there’s a quiet bit, giving an ambient sense of the whole story taking place in a busy town’s community. Sherry Coenen’s lighting is simple red, white or blue states, mostly aiming into the eyes of the audience over the shoulders of the performers (largely because the ceiling was only about a foot above Dandy’s head, and you can’t blind the musicians, I imagine). But, happily, what sound like factors working against the production actually all contrive to make the whole feel that bit more original, urgent and, well, Fringe-y is still a thing too, and a very good thing at that.

Vine and Dandy (seriously? This isn’t some sort of pun on the part of the production team?) duet beautifully. There’s a thing that sometimes happens with opera when voices are independently lovely, but just seem to mesh very poorly in harmony. Here, the voices work perfectly together. There’s also the useful visual fact that Dandy is a good head taller than Vine – emphasised by Dandy also wearing thick soled shoes, so that the minister towers over the imp-like eyeless man and his own child. The acting rangers from subtle to wildly expressionistic with Dandy’s eyes wide like a silent horror film, against Vine’s sharp inscrutable features.

I only saw the thing last night, and it hasn’t actually struck me forcibly on the political level proposed by the pre-election double-billing with The Soldier’s Tale. Nonetheless, as a despatch from the frontline of where contemporary opera is at, and an incredibly impressive display of fringe opera, it’s hard to imagine better. Last night tonight. Well worth a look.

(also, in scrupulous fairness, there’s a much better, Soldier’s Tale oriented review here – five-starring the whole evening too, no less.) ___ Marvellously, the whole original performance (i.e. not this production) of Into the Little Hill is on YouTube: