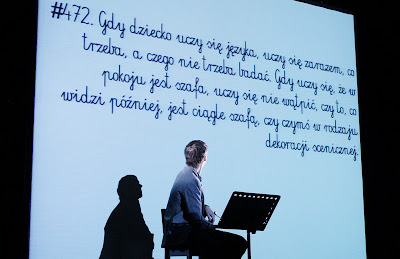 Wojtek Ziemilski's Small Narration is a ““performance” lecture” about, as he says himself, contemporary performance art. And history. It is also about identity. Specifically, Wojtek Ziemilski's identity, the history of post-war Poland, and his grandfather.

And I don't quite know how to review it. Because it is mostly densely packed narrative and fact. Tell the story and you've pretty much completely changed the potential audience-member's relationship with it. Even relate some of the parameters and you'll have done something. On the other hand, this was on for a six-day run during the Fringe, and I've got no idea if it's ever going to return to Britain. It should. It really should. It's a small, simple enough show to put on – all you need is a room with decent acoustics and a digital projector.

[Given how simple a set-up it is, I think more car than normal should be taken with the choice of room. Sure, it could be stuck in the Etcetera Theatre or the White Bear, but they're such horrible rooms. Actually, now I'm thinking about it, there really is a dearth of decent black-box rooms in London. Personally, I think it's Royal Court Upstairs or Almeida sized, but realistically I think it would be a hard sell for either venue, though I'd love to be proved wrong. The Barbican's Pit would totally work, but I guess it's most likely a BAC show]

He sits in a simple wooden chair, probably the venue's own, script in both hands and head bowed into the script. He hardly ever stands, moves, or even looks up. Except that I have vivid memories of him making eye-contact with us all. I don't know how he manages to seem like his face is buried in his script thoughout, and yet look us all in the eye with an appealingly wry smile.

The language of the piece is similarly stark and straight-forward. The English translation isn't quite perfect, which, of course, makes the piece all the more perfect. Similarly, Ziemilski's delivery is an ironic, flat, Polish-accented delivery. It's not a monotone, because every emphasis is expertly placed, and there are discernible changes of mood and colour in the voice; and yet, it retains a sort of anti-performance deadness. It's very good.

He says: “It began when you did not want to go on stage, because you do not like being on stage, but there was no one else, except for the gentlemen from the Institute of National Memory.” And if this isn't someone who doesn't like being on stage then it's the best performance of it I've ever seen. Ziemilski looks uncomfortable, but somehow commanding. Similarly, his tone, his delivery, while refusing the usual comforts, seductions and ingratiations of the one-man-show, demands to be listened to.

There's an quiet intensity and force to what he's saying and how he says it. An anger, too. Perhaps it's this sense of quiet fury more than anything that makes the performance so compelling.

It's only stuck me just now, over a week since I saw the piece, to even bring to wonder whether it's actually a true story, or a made up one. Which is beyond unusual.

In fact there are several stories. It's glancingly about Wojtek Ziemilski, how his name should be spelt. Where he's lived and pieces of contemporary performance he's seen. But much more than that, it's about his (aristocratic, opera-singer, critic) grandfather being publicly outed by the Polish Institute of National Memory as an informer for the secret services of the Communist Party from 1949 until 1972.


It closes with another quite from Wittgenstein:

#676. If something has taken away my consciousness, then I am not now really talking and thinking. I cannot seriously suppose that I am at this moment dreaming. Someone who, dreaming, says "I am dreaming", even if he speaks audibly in doing so, is no more right than if he said in his dream "it is raining", while it was in fact raining. Even if his dream were actually connected with the noise of the rain.
Posted by Andrew Haydon at 23:42