A Midsummer Night's Dream (As You Like It) – King's Theatre (EIF) 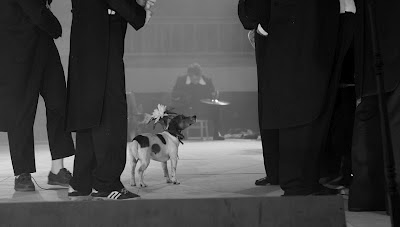 Like Christoph Marthaler's Meine Faire Dame last week, the best strategy for enjoying Dmitry Krymov's A Midsummer Night's Dream takes more-or-less everything you know about about Shakespeare's Athenian woodland comedy, screws it up into a little ball and chucks it over your shoulder.

Krymov's production is essentially the last twenty minutes of Shakespeare's play – the bit where the proles perform Pryamus and Thisbe for the poshos – spun out over one hundred of the best minutes you'll ever spend in a theatre.

Bursting into the auditorium through the back doors, house lights blazing, and a chandelier still sat on stage, these twenty or so Russian rude mechanicals open the show by noisily, joyously, carrying a dangerously enormous tree trunk into the auditorium, which is topped off by an excitable dog trotting up and down it. Any pretence of division between stage and audience is completely shattered. We're here, now. We're in this together, and we're implicated and indicted by what follows.

After the mechanicals have set themselves up on stage – a process that also involves carrying a preposterous giant fountain through the auditorium, spilling water merrily all over the place as they go – their “audience” arrives. Sweeping imperiously down the aisles, these are the new Russian aristocracy. Looking spookily similar to our own celeb-, banking-, and old-Etonian class, they command the space noisily, self-involvedly; they sit down, their phones go off, and the performers shrink from them.

There's been a bit of business about the performers not wanting to smell of garlic. One of the first remarks one of this “audience” makes is that the performers smell of garlic. One falls face first to the floor in apparent mortification. When he gets up again his nose is bloodied. His white-gloved hand is bloodied. Both remain so for the rest of the play; a standing rebuke to the casual callousness of this new bourgeoisie. One of the most prominently placed women of the group is appallingly, almost inappropriately beautiful; dressed in a white fur stole and a black, backless dress, the skin on her shoulders radiant, we're reminded that the rich seem able to buy anything they like, including physical attractiveness and/or beautiful partners. (Yes, I am acutely aware that reads like I'm just being sexist. I'm pretty sure the way this mise-en-scene has been constructed, and that reading is made available entirely deliberately. If not, I'll hold my hand up and say, ok, last night I got very distracted by a beautiful Russian actress. Sue me.)

The player with the bloodied nose offers an introduction. Pyramus and Thisbe, he contends, are the first lovers. Well, no, Adam and Eve were the first lovers, he corrects himself, but they don't count because they didn't have any choice. He lists countless more great lovers from the classics and history, finishing with “Pyotr Tchaikovsky and his coach driver”. He stares out his “audience” as they look uncomfortable.

As of March 2012, this statement is probably illegal in St Petersburg, Ryazan, Arkhangelsk and Kostroma. And the company know exactly what they're doing. This isn't just knockabout clowning with a Shakespearean title. This is a piece very specifically about Russia today. It conjures the new laws banning “homosexual propaganda” in St Petersburg; the new 100-year ban on Gay-pride marches in Moscow; it makes you think about Pussy Riot; about Oligarchs, about the fact that since the end of communism, Russia feels like it has accelerated through the whole of the middle ages all over again and wound up right back where it was 100 years ago with a new aristocracy and a new peasant class.

The production says all this without ever once explicitly naming anything. It is like watching old Eastern European theatre that had to hide and encode its subversive messages because a direct confrontation with the authorities would result in prison sentences or worse. There are repeated references to the KGB Archives at the Lubianka. There is little doubt about what the production is suggesting modern Russia is like.

And yet at the same time as offering scapel-painful metaphor the piece is also raucously funny and, at times, strangely beautiful.

The version of Pyramus and Thisbe that this proletariat enact is a giant puppet show. Pryramus arrives first, a strange, towering Button Moon-style creature, with an inscrutable, boyish, Roman portrait for a face. Thisbe, when she turns up, is much the same, but with a strange Betty Boop-ish head and curiously adult, prominent plastic-domed breasts.

The main interest of the presence is the curiously precarious position they're often put in by this workers' theatre troupe; often threatening to overbalance entirely.

There's more horseplay. Avoiding circus and acrobats as I tend to, I'm probably more impressed than I should be by the tricks that are pulled off here in the service of something less asinine. There's also the best performing dog you're ever likely to see. Apparently there was a performing dog on Britain's Got Talent recently. I've looked it up on YouTube; Russia's Got More Talent.

This is a stage dog that can follow blocking. Hell, this is a stage dog who seems to have grasped method acting. You can almost see the flickers of eager anticipation across the creature's tiny, intelligent face as it waits for its next cue. You know how some performers just put you at your ease as soon as they walk on stage by virtue of their confidence and competence. This dog was like that. Perfectly, minutely drilled, it looked for all the world like he'd done it a thousand times before and couldn't be happier doing it again.

The net result is that this is an incredibly funny show, and yet one repeatedly underscored with an atmosphere of palpable real-world concern. It's the end of Shakespeare's play with all the fear and power-politics reinstated. We see, from the players' perspective, exactly how much freedom they don't enjoy, entertaining Russia's new rulers at the cost of their personal dignity; that, irrespective of how talented and funny they might be, joyfulness is a poor second to power and money.
Posted by Andrew Haydon at 23:36