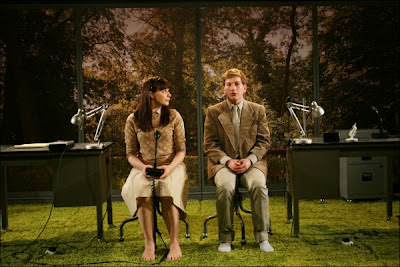 The first section below are notes written straight after seeing the play while the rhythm of the play's speech was still part of the way I was thinking:

I'm afraid I succumbed to a bit of ageing-critic-itis in yesterday afternoon's Traverse 2 show. Blink visually recalls Gary Owen's Drowned World (2002) and starts out a bit like David Greig's Midsummer (2009). Both shows I'd seen in Trav.Two. (For extra Brownie points, I think the first thing I ever saw in there was Crave in 1998.)

Jonah: ... And the music in Blink is a bit like the music in Midsummer. There's an interesting quality of electric-acoustic guitar playing that I think of as being especially Scottish. There's a real attack to the playing, somehow. Musically it's somewhere between the Velvet Underground's later records, the Jesus and Mary Chain sans feedback, and maybe Belle and Sebastian too.

Sophie: The set is a clever, gorgeous thing. There's a thick pile, green, tufty carpet. It looks like grass (it also looks like the white thick pile, turty carpet in Mess; one more and it's either a design trend or a job-lot).

Jonah: And there's a back wall which is made of four panels which are about the height of a wall in a normal room. And there's a kind of forest scene printed on them.

Sophie: On the carpet are two desks, and quite retro office chairs. They are made of metal and wood.

Jonah: The story is about Sophie and Jonah. They are telling us about the story. In the present tense, I think.

Sophie: The story is about how they meet. It's like a romance. They tell us about themselves separately. But they seem to know the things that the other person is saying while they're not acknowledging each other on stage.

Jonah: They comment on how there are coincidences in their lives prior to meeting. He lives in a religious community. She lives on the Isle of Man. Her Father dies. His Mother has left. Someone else dies of Pancreatic Cancer.

Sophie: And then the story starts. And it's hard to discuss what the story means without giving away certain facts. But I'm going to try. Maybe I'll put the plot in when this run has finished.

Jonah: The play should probably come with the warning: Actually Quite Sad.

Sophie: But it doesn't work like that. It's an odd thing...


Up to this point. I haven't seen or read any of the pre-publicity material and I can't even remember if the writer is a man or a woman and I don't know who directed this show.

I had been told a major spoiler – or at least a massive swerve in direction that the piece takes. But I'd forgotten that I'd been told about it until I saw it happen in the play.

Actually, I had been aware of the general Twitter-buzz, with which I largely agree, it is a really good, neat, intelligent piece of work, which keeps going in unexpected directions to get to the place it wants to take us to. On the other hand, one thing that that *buzz* seemed to be lacking was any acknowledgement that the piece is also really sad, I thought.

The thing that really struck me was a line a couple before the end:


“It's why doctors prefer the word 'rehabilitation' to 'recovery'. Does less to suggest you'll ever be totally fixed.”

Which seemed almost a direct echo of what the character Josephine says in Mess:


“It hasn't gone away – It's still here. And it'd be terribly irresponsible of us to suggest to all these people that eating disorders just end, I don't think they ever really do, so this play can't ever end.”

It works for me as an idea, and something worth thinking about more and reflecting on, but it's interesting that it's come up now – or that it was floating around the ether when these plays were being conceived, and devised, and written. But that was ages ago now. It seems silly to say that the way that various people were feeling in various parts of the country at various different points prior to now should somehow reflect how we're all feeling now. And yet, it kind of works.

Oddly, one of the most striking things about Blink is how stylish it is. Sure, it's got a really nice, kind of Habitat-cool design going on, and some unobtrusive accumulating mess German-style, happening all over the carpet, but director Joe Murphy has also achieved a real sense of low-key dash with the performances ofHarry McIntyre and Rosie Wyatt.

[meta-reviewing: Ok, I have no idea whether it was Joe who got these performances from Harry and Rosie, or whether they did it themselves totally against Joe's wishes, or if Joe and Harry and Rosie all just worked hard with or without the writer and came up with something that worked for them and I just thought that the result looked cool. No one does, but it's a good way of getting all their names into one sentence, and if you do have a word-count, that's what you have to do. Which is how mistakes happen. And how orthodoxies build up. Because of shorthand. Sorry you have to read this long-hand, though]

McIntyre is one of those actors who, if cast aptly, is always going to bring something that feels fresh and insightful to a part. I've only seen him in Punk Rock before, but that's how it feels. I suspect, I'd be saying the same about Wyatt if I'd seen her in Jack Thorne's Bunny, instead of the actress who did the early reading I went to. Worth noting too that Murphy directed Bunny and associate-directed Punk Rock. Train-spottery, sure, but probably why, even without being able to feel the seams, you sense a real cohesion and collaborative spirit here.

So, yes, there's the aesthetic, which – and this is almost criticism as synaesthesia – kept on reminding me of this amateur splicing of a short film with a song on YouTube.

Actually, this overall sense of the aesthetic is important – wherever its genesis (inside my head, is a plausible enough answer) – because it really controlled the way I *read* the story. It strikes me, that this would have felt like an entirely different play if the setting and style of acting had been, say, more urban and gritty. (Which would also have been a totally plausible choice.)

What's also interesting is that a few years ago it probably would have been. Now, however, theatre seems to have moved on from “dirty-realism” to something which, if I wasn't a bit more careful about splashing around the names of specific learning difficulties, I might call “autistic-realism”. It feels like it's the coming thing at the moment, and this seemed to be a perfect design to underscore that version of Phil Porter's text. Obviously “autistic” is completely the wrong word. I also mean a kind of ironed-out kookiness coupled to a dual extreme-precision/emotionally-vague sort of thing.

I might come back to this thought when I've got it a bit more thought-through, but you know the sort of thing I mean, right?

So, yes: Blink has got an unexpected trajectory, a beautiful concept and seems to have something wider to say that might not just be the story of one odd-couple in London, but something about interdependence and interconnectedness which feels both necessary and rather tragic.


Definitely worth seeing.
Posted by Andrew Haydon at 16:40