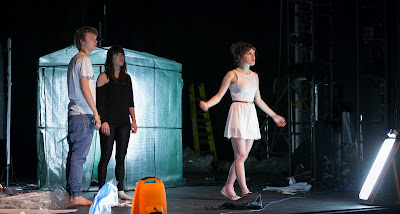 Morning is Simon Stephens's most punk rock play yet. It shares a number of similarities with several of his previous works, but also feels like the culmination of a trajectory.

Perhaps the most interesting thing about the piece, however, is the question over the extent to which it should be talked about as “a Simon Stephens play” at all.

The piece was written for both the Lyric (Hammersmith) Young Company under the direction of Sean Holmes and the Junges Theater in Basel, to be directed by Sebastian Nübling, following a series of workshop sessions with a handful of company members from both Basel and Hammersmith. In the case of Sean Holmes's take on the text, the company then proceed to devise a show around it.

[Meta-reviewing: as such, it is only convention that leads me to call it “Sean Holmes's”. The more this year's Fringe proceeds, the more recent discussions about text and collaboration feel incredibly, pressingly relevant; and desperately in need of a new critical vocabulary to support and articulate them.]

The anti-heroine of Morning is Stephanie (Scarlet Billham), a young woman whose mother is dying and whose best friend is just about to disappear off to university. Morning is a play about listless teenage alienation, but it also feels like a play which itself is listless, teenage, alienated and angry. In this production it also feels like the clear statement of intent. An unapologetic, unambiguous “fuck off” to those who want a glimmer of hope from Simon Stephens' plays.

Stephanie is a direct literary descendent of Punk Rock's William Carlisle (and that play's Lily, too), but also Ibsen's Hedda Gabler and Camus's Meursault from L'Etranger. Indeed, plot-wise, Morning could be viewed as a free adaptation of The Outsider, or perhaps, given Simon's penchant for post-punk, his version of Killing An Arab.

I'm not going to claim that everything about this production is perfect. I think there's a slight problem with the first three scenes which I suspect might permanently alienate some audience members. The essential issue is this: there's a real drive to get to Scene Four. (The written text has Twelve numbered scenes although scenes Seven and Twelve are simply stage directions and Scene Ten is a stage direction regarding the piece of text I've quoted in its original language at the top of this review.) Scene Four is where the action really kicks off. Scene Four is the crux and the point, and it feels like the writing (and performance) totally relaxes as soon as it arrives. The play gets funnier and much more interesting. The first three scenes simply serve to establish Stephanie with her best friend, Cat (Joana Nastari); her boyfriend, Stephen (Ted Reilly); and her brother, Alex (Myles Westman). Interestingly, again, they are written in that register I described in my Blink review yesterday as “autistic realism”. Maybe “Blank Realism” or “Deadpan Realism” would be better.

However, the problem isn't that the first three scenes “aren't good”. They're actually perfectly interesting scenes. The problem (if it is a problem at all, and not just something I've imagined), feels like it has more to do with having to take on board an awful lot of different things at once.

The style of “Sean Holmes's production” [see above note] is – well, a quick shorthand might be to say: “Sean Holmes seems to have spent a lot of time hanging out with Sebastian Nübling during Three Kingdoms”. This in itself is fine. Once the production gets airborne, it is actually a dizzyingly good take on this way of doing theatre. Holmes handles the post-Brechtian dissociated action and speech like a natural, and has created a nuanced, thoughtful, savage vision of the teenage world. It's not actually German, but nor does it strike me as simply ersatz. It is pure mid-North Sea sensibility; a naturalised synthesis, itself only in its infancy. It's certainly the best German I've ever seen a British director do.

Moreover, Holmes is working with British teenagers whose exposure to this style of performing must, perforce, be limited. As such, while it quickly gets good – and actually, it might start great too – it feels like both performers and audience have to tune into the register that's been deployed before being able to enjoy it. In short, while you're tuning into the style, you might worry that the young actors aren't actually very good at acting. As such, it feels like an incredibly brave way to present them.

I wondered if opening the piece straight onto designer Hyemi Shin's artfully arranged “undressed stage” (cf. Well, lots, but most notably Jeremy Herbert's for Ramin Gray's production of The Ugly One), was maybe one too many things to take in at once. Perhaps I'm worrying unduly, though. It only took me five minutes or so to tune in completely, and as I say in my review of The Letter of Last Resort, it took me a similar length of time to tune in to the performance style used there.

The set is actually more complex than merely an empty stage, though. There's litter too, and a kind of translucent roadworkers' tent, there's plastic sheeting, a large metal cupboard that's playing a fridge, the sound desk is on the stage and all about the place are strewn standing neon strip-lights and the sorts of wire-encased light bulbs that might hang in building sites. It's neither solely practical, nor deliberately obtuse. The whole suggests a very definite aesthetic, and totally supports the needs of the production.

The performances are similarly multi-layered. A quick flick through the script will confirm what you already suspected, that Holmes has stripped out all the stage directions. But this is obvious simply from watching. At one point, Stephanie and Cat tie Stephen up:


She takes off her belt and ties his hands together

says the script. On stage, Nastari goes and fetches a roll of white gaffa tape and binds Reilly's arms to his side. There are numerous examples of this kind of deliberate disconnect between stated action and the way it is performed. Were this a German production that would almost go without saying, but it's terrifically exciting to see it put into practice so deftly here.

At the same time, the actors do find their characters. Nastari's Cat is as frighteningly sexy as Reilly's Stephen is cutely diffident. Myles Westman (apparently only 14) is preternaturally good as Stephanie's younger brother Alex, combining a simplicity and honesty of performance with the rigours of the production style. There isn't a weak link in the supporting cast either, although special mention should be made of Michael Czepiel who wrote (is it written?) the music for the piece, and also plays a character called “Mikey” as he sits on stage operating the sound desk (is it a sound-desk?) and performing the music. “Mikey”, like "The Trickster" in Three Kingdoms, isn't a character in the text (at least as far as I'm been able to spot). Unlike the trickster, though, he has got a few lines, nicked from other characters and delivered with brilliant deadpan timing.

Actually, Czepiel deserves a huge amount of praise, quite aside from delivering some beautiful comic moments, for the pieces terrific score and soundscape. I suspect it's all generated live every night – although perhaps parts of it are pre-recorded. There is certainly some use of live mics on stage being used to capture specific moments of noise, speech or screaming, which are then treated, fed through echo effects and replayed at subsequent points in the piece alongside the menacing dubsteppy - (is it dubstep? How would I know?) - sounding backing. The overall effect is reminiscent of Peter Rehberg's music for Gisele Vienne's work. But by the looks of things, Czepiel is all of about 20, if that. Which makes his talent not only objectively impressive, but also slightly sickening. :-)

So, yes. Once it's aloft, the whole company plays a blinder. But what -- anxieties about “authorship” aside -- of the play itself? Why do I argue that it is: “Stephens's most punk rock play yet”, “The culmination of a trajectory...”, “A play which itself is listless, teenage, alienated and angry”, “A clear statement of intent. An unapologetic, unambiguous “fuck off” to those who want a glimmer of hope”?

It's partly down to the last speech, in scene Eleven. Interestingly, in the script, Stephens undercuts the sheer force of the nihilism in Scene Twelve with the final stage direction:


The set for the play is in some way dismantled and made brighter.

An interpretation of that instruction might have made it into Holmes's staging, but it certainly doesn't read as redemptively on stage as it does on paper.

Therefore, pretty much the last thing we're left with is the following sentiments:

“There is only terror there is no hope.”

(all the above quotes culled from Stephanie's final monologue)

Watching the production, and I suppose falling right into that trap of attributing everything that happens on stage to the writer, I saw an angry fuck-off speech that pretty much picked up a rifle and picked off the critics who had taken issue with, say, Wastwater's “bleakness without the hope”, saying: “You can't have any more hope. Hope's off, love.” Blam. Blam. Blam.

It's an attractive reading. The seductiveness of teenage nihilism will probably never fully lose its appeal. On the other hand, it's not actually all of what Simon's written. He has (arguably) subtly undercut it with a metaphor contained in a stage-direction. Which is somehow even more charming. I think he's on record as saying once you've had/got children, actual nihilism, no matter how attractive, isn't really a realistic approach to life.

On the other hand, there are frightening echoes in that last monologue of frequent Stephens-collaborator Katie Mitchell's latest piece, Ten Billion. And Ten Billion isn't a teenage tantrum, it's science. And so, through this monologue, we don't just hear the Situationist posturing of Johnny Rotten's "no future", we see the spectre of inevitable global catastrophe.

Even the carnage that gave birth to Camus's troubled Meursault in L'Etranger (pub.1942), is going to look like a walk in the meadows when this thing breaks. This is a play staring into that abyss – because, after all, these performers are a good twenty years younger than Simon or Sean or me, so, barring accidents, they're going to see a lot more of what's coming next than we are. Perhaps more than being a play by a grown-up who is scared of young people (it clearly isn't), it's a play by a parent who is terrified for today's young people.

But I shouldn't let myself be seduced by a suddenly plausible and suggestive reading. At the same time, this is still a study of alienation and the kind of scary blankness and apparent lack-of-conscience that teenagers exude, while at the same time, even here, articulating all the while precisely how not switched-off they are, talking all the time, trying to explain almost minute-to-minute precisely, honestly, exactly how it is they really real, no matter how contradictory, strange or wrong it sounds.

No; this isn't perfect. Perfection, even neatness, would be the wrong form for either play or production to take (although “clinical” would be an interesting counter- production-aesthetic to see), but it is intelligent, nicely staged, and fascinatingly textured. And, in writing all this, I think I've pretty much realised I want to see it at least once more... 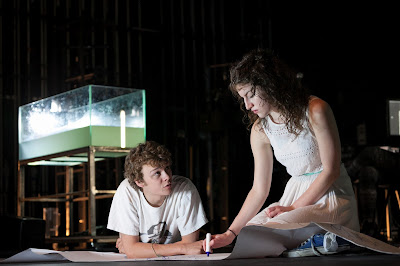 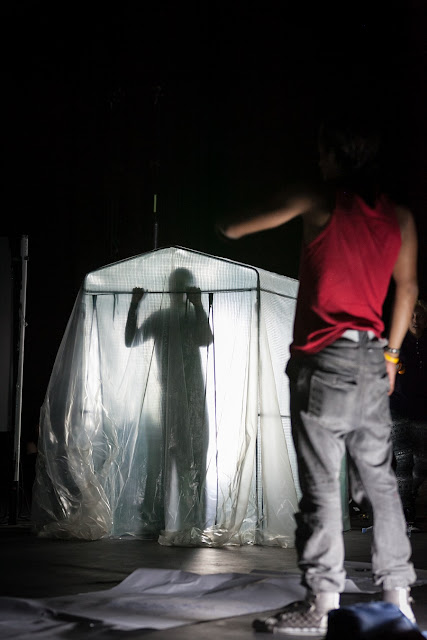 I hated this play. There were no moral consequences for the characters, it was completely amoral and then at the end she scrawls a quote from Karl Marx but there has been no reference to Marxism, or his ideas. It was offensive.

I am doing this play at College and i am loving working with my peers on it! There are some brilliant aspects involved and i think that we are all working hard on the characters! I really like this play :)