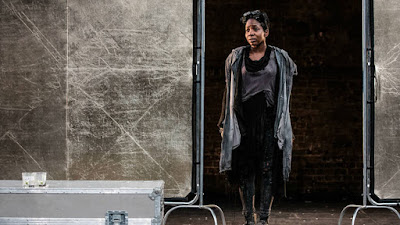 It’s odd, isn’t it? Very few playwrights seem to write “comedies” any more. And, indeed, calling a new play “a comedy” almost feels unkind. Like, it would be nicer if we called them “plays with jokes” or something. Like, “a comedy” can’t be all that good; let alone “Art”. It’s maybe worth remembering that Shakespeare, Moliere and Chekhov all wrote comedies; and observing that Antony Neilson’s Unreachable follows in the tradition of all three.

Nominally, it’s a play about a guy – Maxim (Matt Smith) – trying to make a film in impossible conditions. The impossible conditions stem partly from his neuroses, partly from his attempts at self-sabotage, dressed up as artistic vision, and partly from actual integrity and vision. In the first scene, we see Natasha (Tamara Lawrance) performing an audition speech for the film. It’s an extended monologue in which a mother appears to kill her baby in an attempt to protect it from soldiers in some sort of death camp in from the near-future. This mercy killing then appears to turn out to be a ghastly mistake. It’s almost too cruel a scene to imagine, but at the same time, we’re always acutely aware that it’s only fiction. She’s standing on a bare stage a light snaps on when she starts and off when she ends. Smith’s voice says a funny little thank you. All the time we know it’s only an audition speech, but it’s hard not to get involved, to imagine the scene, to also believe in the reality it describes...

In the next scene we meet the producer, Anastasia (Amanda Drew), and camera-man, Carl (Richard Pyros), who are despairing of Maxim who has decided that “Child of Ashes” needs to be shot on film stock not digital, with a consequent massive hike in cost. Through this one scene we discover almost all of the underlying conflicts that drive both the characters and the comedy in a masterclass of concision and imperceptible exposition: Maxim is essentially an orphaned Konstantin with a Hamlet-sized talent for procrastination – perhaps dropped into a contemporary nest-of-vipers every bit as venomous and self-serving as those in Moliere. These parallels are not entirely coincidental, I’m sure, nor are the comparisons meant lightly. Alongside the comedy – line after ridiculously funny line of it – there’s that same sense of a play gnawing at the human condition, the condition of art, and how people even begin to relate one to the other.

In order to fund the film’s spiralling costs, Anastasia finds £6m’s worth of new backers, but they have the rider that one of their associates sit in on the rest of the filming. It turns out that Eva/Ewa/Ava(?) (Genevieve Barr), who they send, is deaf, but this doesn’t actually constitute an issue, unlike the very fact of her presence for Maxim’s “creativity”. However, because Maxim’s problem with the film stock has been solved, he needs to find a new way to stall the filming until he “finds the right light”. To this end, he recruits his longstanding collaborator, Ivan “The Brute” (Jonjo O’Neill), an absolutely ludicrous monster of a human being channelling every anecdote about Klaus Kinski you’ve ever heard, and more.

And, well, the play keeps on being deliriously, joyously, riotously funny. The style of humour impossible to pin down, from the faux-gnomic proverbs spouted by the Telegin-like Carl to the turned-up-past-11, bombastic, space-rock-velocity invective of the terrible Ivan. There are acid one-liners and elaborate farcical set-ups; almost every sort of funny is thrown at the wall, and most of it sticks hard. Frankly, I’m still in a good mood the morning after, my cheeks still a bit sore from all the grinning. Yes, many of the jokes are in incredibly bad taste, but this in itself feels welcome, important, and even politically astute.

Underlying all these gags is this tender, melancholic story about these lost, sad people, every bit as compassionate and cruel as the tragi-comic collections of misfits who populate Chekhov. The orphaned Maxim who seems to have contrived to turn everyone he’s met since into a parent; his doting, condescending, self-sacrificing “mother”, Anastasia; his blokey, matey, but jealous and would-be usurping step-father-figure Carl; the rapacious, cold, cruel, but ultimately tender Ivan; the near sociopathic Natasha who finally discovers a kind of dangerously misguided altruism; and the interloping Ewa, who subverts every cliché about her position as a financier, before perhaps both conforming to type and exposing our comforting illusions about “Art” and “genius” in the process.

The shape of the narrative is both familiar and strange. We know this sort of journey of self-discovery and inner-turmoil from Hamlet, The Misanthrope, Platonov, whichever, but Neilson makes the structure firmly his own – particularly with a final transcendent image which is both preposterously kitschy and OTT, and that at the same time feels entirely sincere and actually beautiful and true (set designer Chloe Lamford, on precise form all the way through, delivers a knockout coup in tandem with Chahine Yavroyan’s lights); also including what I took to be a brilliant nod to that other petulant, impossible manchild film director, Lars von Trier.

The performances here are vast, generous slabs of raw feeling. If you missed stage-Matt Smith before he went and became Doctor Who, you’ll be reassured to find him back on top form here. It’ll be annoying to almost everyone to compare his Doctor to Maxim, but, well, if you like the former you’ll find much to warm-to in the latter. Against this beautiful, subtle model of outward-self-as-character, Jonjo O’Neill’s Ivan ought, by rights, to break the play. That he does not, instead seeming to suddenly draw in the audience across the footlights and through the 4th wall, suggests a stage presence of magnificent dexterity. That on top of this he and Smith endlessly spark off each other in real live time, while appearing to inhabit entirely separate dramatic universes, speaks volumes about Neilson-as-director’s real feeling for theatre. Tamara Lawrance’s performance is similarly pitch-perfect. Having been gifted the potentially lethal part of an actress who is generally completely deadpan unless she’s acting, which she always does brilliantly, she inhabits it with such conviction that you forget as an audience member that this is her character’s hang-up; we are as startled as the other characters of the play when she seems to flicker in and out of role. Amanda Drew is also brilliant, as ever, in the slightly more thankless, straight-forward role of Anastasia, one of the play’s tri-partite beacons of feminine sanity. Richard Pyros does beautiful work as the “cameraman who wants to be seen”, and Genevieve Barr is a revelation as a comic actress after I was the only person in the universe who didn’t get on with The Solid Life of Sugar Water. It still strikes me as astonishing today that there were only six people acting in the show. The stage feels like it is constantly alive and teeming.

Unreachable is a remarkable play. Even ignoring the circumstances of its creation, or its pitch-perfect response to the national mood – that, now more than ever, we need a) a fucking good laugh, b) a reason not to kill ourselves/a bit of perspective, and c) something transcendent – this is perhaps one of The Great Plays of this decade. Chekhovian scope and ambiton, Hamletian in its storming the gates of the sublime... Except, I’d have far rather seen Unreachable than Hamlet. It may at times tap into a similar vein of problematic male self-entitlement (so it’s a relief to see Ophelias zimmer designer Lamford also on board with this latter-day Dane), but it takes place in an entirely different universe; a universe where, crucially, the women have voices, agency, power, the upper-hand, and, frequently, the last word. It may not offer concrete answers to urgent contemporary questions (or slavishly just set abut documenting what those questions are), but to suggest that this is a dereliction of duty is like worrying that Ivanov is a bit thin on details of the Russian-German reinsurance treaty of 1887. 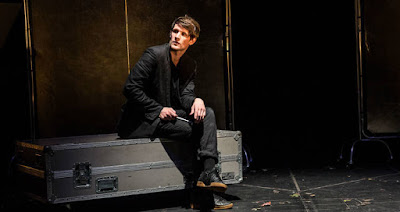