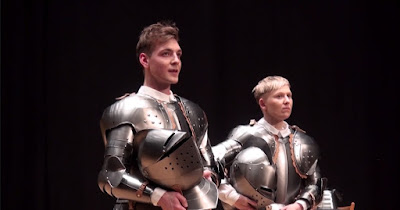 You know that “problem of theatre” (/performance/Live Art/whatever) that we never really talk about? You know the one, the one where it’s essentially a privileged club for the liberal elite, in which “You Can Say What You Like” and “Freedom of Expression” come with some unspoken riders, and it turns out that most of the actual people we’re “concerned for” and meant to be “liberating” hate us. (Oh, and how it absolutely reproduces capitalism down to the absolute last detail, even though it’s “anti-capitalist”..., And maybe how it reproduces racial inequality too...) Remember now? Cool.

99 Words For Void is as good a stab at destroying that paradigm as any I’ve seen. It’s clearly fiercely intelligent, and – since this review is liable to go into rhapsodies about the theory, it’s worth remembering that it’s also – beautifully performed.

The set-up is this: The space is in pitch darkness. For a while. We hear an almighty clanking moving towards us. We hear two voices addressing us out of the darkness. Nice voices. Kind voices. Charming voices. Voices speaking English beautifully, with charming accents.

Iggy Lond Malmborg and Malke Lond Malmborg say they’re brother and sister, and who are we to dispute this? Even if one (Malke) is Estonian and one (Iggy) Swedish.

They tell us that the show is 90 minutes long, and that we can’t leave once it’s started, but they’ll give us four minutes to decide. They play this black metal song while we decide. The lights flash on occasionally. They are dressed in full suits of armour.

And this is perhaps the best, and most constant clue to how the piece might be operating. This idea of Old Europe, this idea of old, medieval, white Europe, set against this left-liberal rhetoric of inclusion and tolerance and workers’ rights. Even just visually, it’s such a stringent critique of either Art’s hypocrisies, or it’s tolerated duplicities.

Perhaps as an illustration, they show us photos of “their grandmother” and “their mother,” projecting them onto a little screen and passing round the originals in their frames, while they make themselves a little cup of coffee and talk about how their grandmother used to work 14 hour days six days a week in a factory and how she used to drink coffee and how she founded a workers’ rights movement, and how everything improved... And then, how their mother started a Fair Trade coffee plantation in Ethiopia... The photos being passed around reach us, and we see that they are still wrapped in their “Made in China” wrappers.

They talk about how their mother’s workers have now rebelled, and about the Charlie Hebdo attacks, and about the Royal Museum for Central Africa outside Brussels, and how when they were visiting it, Brussels was full of armed police, and there was a sculture of their mother with massive claws instead of fingernails, and how it had turned out that this statue had been made by one of the Charlie Hebdo terrorists, and so it was taken out of the museum and destroyed...

What perhaps propels the piece that bit further towards incision than most is the way that it constantly plays with that sense that we’re always meant to agree with the things that artists are saying. (And/or, possibly, that if we’re not, then the fact we’re not is usually so heavily signalled.) Instead, here, they’re all charm and plausibility, even while gently flirting both with us and with fascism. Or maybe they’re just satirising the ineffectuality of leftist art from the right. Really, though, the critique itself is most effective not because it successfully proposes an alternative, but simply points out that the current model is broken.

In their story, their mother is dying of cancer, and she tears off a necklace she’s been wearing with the word “Hope” on it, and says that if it’s hope keeping her alive then hope merely prolongs the pain, and she’d rather die now. They are proposing the end to leftist art. Or perhaps, demanding of it that it rethinks everything that currently compromises it.

At the same time, their critique of white Western Europe offers no answers. Perhaps it gently raises the spectre that, given our history, it’s only logical to expect some comeback at some point. This, combined with the knightly armour and the black metal almost invites us to see theatre as a kind of far-right mechanism. Even everything they say early on – about it being nice that we’re all in the room together, breathing the same air, committed together to watching the piece – has distinct fascist possibilities; this crunchy disparity between “our” (Artists’, theatregoers’) tolerance and our intolerance of intolerance. We’re made to feel very acutely how we’re actually a very small, self-selecting elite. And our platitudes about the essential goodness of art are almost played back to us verbatim, sounding distinctly more sinister than when we said them. But, unarguably, they’re the exact same things about identity and community and society and so on that we always hear.

The piece never labours its point (like I just have). Instead, it kind of keeps everything playful and light, and never really lets it feel like a major point has just been landed. Instead, these ideas, and parallels, and problems just keep being raised, in this problematic setting, in this problematic audience of which we’re a part. And suddenly the whole idea of everyone “just sitting together being connected in a fractured society” feels every bit as suspect and Nazi-sounding as it always should.

Again, this should be transferred to UK post-haste.

((Oh, and I haven’t mentioned the banjo or electric guitar yet! There was a whole Magnetic Fields-style song!))