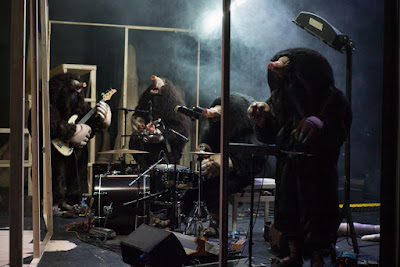 Ever since I saw La Mélancholie des Dragons in Manchester last year, I’ve been a massive convert to the work of Philippe Quesne (whose work I first saw here in Rakvere, Estonia, at the Baltoscandal festival in 2010).

Consequently, I’ve been dying to see La Nuit des Taupes (Welcome to Caveland!) since the first trailers for it on social media.

[On balance – declaration of interests/mitigating factors – if there was a way I could have seen it on a day that hadn’t also included a 3.30am start to get to Stansted for a 6.45 flight, that would have undoubtedly been better. Also, if Leave hadn’t won the UK Brexit vote, that would have been better too. It’s true what my depressed, left-melancholic UK theatre critical colleagues are saying, it is very difficult not to read pessimistic narratives onto everything right now. But no matter. Onwards...]

And, well, it’s a very nice show. If you’ve seen Mélancholie... then you can probably imagine it fairly well. The title – La Nuit des Taupes [The Night of the Moles] – and a few production images give you more or less everything you need to imagine it. What Night of the Moles is, is some blokes dressed in giant mole costumes playing kind of space-rock music and also playing out some obscure scenes of mole life. There’s the excavation of (foam) boulders, there’s death, there’s birth, there’s sex, there’s eating giant earthworms, but most of all there’s rock‘n’roll; as I’m sure is the case with actual moles.

Across the course of its 2hr stage time (apparently. It felt *way* faster), the moles totally destroy a plasterboard room (doesn’t everyone this year?) and re-build the stage as Caveland! replete with foam stalagmites and vinyl stalagtites dangling from the flies. There’s oodles of smoke, flashing coloured lights and a big sign saying Welcome to Caveland in rockabilly horror font.

As I reflected with YOUARENOWHERE: “this sort of visual theatre really only ever offers a mirror to the critic. Or a kind of hopeless Rorschach kaleidoscope; you stare at the reflected tumbling pieces, but can only really make out shapes created by your own mind. ”

So, yes, I could tell you about all the stuff I thought about while watching this, albeit somewhat sleep-deprived, and Brexit-bereaved – all the more keenly as Estonia is one of the places I’ve got most out of during its relatively short EU membership – but I’m not going to. There is, however, something interesting about the cycles of birth and death, destruction and rebuilding, that felt both pertinent and intended, though. That’s maybe the thing to hang on to in these days of accelerationism, exceptionalism, catastrophe-thinking and heightened paranoia. 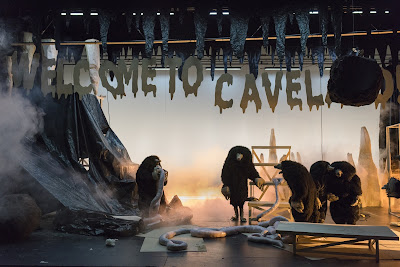