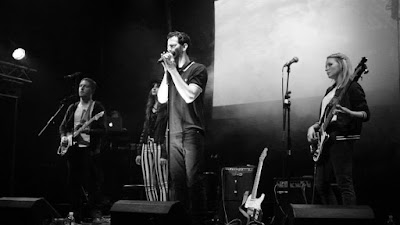 Star-ratings are rubbish. We all know that, right? Middle Child Theatre’s Weekend Rockstars is a perfect example of a show that would be a bleeding nightmare to star rate. In terms of raw potential, energy, performances, and pretty much re-inventing the idea of musical theatre from the smouldering ashes of everything you thought you knew about musical theatre: full marks. I definitely want everyone I know to see this show. And for the company to be picked up, worked with, collaborated with, and to go on to make A Lot More Theatre Like This.

At the same time, I’m keen to flag up that I also had a few reservations. And I’d like to be able to talk about those reservations without putting people off from seeing it. Is that ok? Could you book the ticket now before reading on? Ta. (Not least because, well, I think the idea of theatre having to be/aspiring to be “perfect” is silly and wrong anyway. We’re all good with seeing some work which has a few crunchy issues that we can chew over, right?)

It’s hard to know where to start with talking about the good bits. The format of the show is essentially theatre-as-gig. Take everything you know about musical theatre and set fire to it. I’ve always wondered how it was that I could really love gigs (although, pfft, standing) and really love theatre, and yet so very, very rarely see a musical that I liked. Or even understand why the music in musicals is like it is. Weekend Rockstars essentially does what I’ve long hoped someone would do and makes a gig into a piece of theatre – one that tells a story, one with characters, one that works pretty much brilliantly, and *is still also a pretty good gig*. Brilliant. The performances are also outstanding. The company of five are all great actor/performers, and bloody talented guitarists/bassists (plus ‘cello and synthy/keyboard/laptop/stuff at the back). And they’ve all got northern accents, which I realised, watching the show, I’d been missing quite a bit since I got here. The music is broadly a sort of Pixies/Blur hybrid, with maybe hints of Oasis (boo) and Joy Division (yay) thrown in.

So, yeah. While maybe not the best piece this company are going to make, all these aspects are bloody exciting to witness at the raw early stages.

Then there’s the story itself, with which I had a few more issues. Basically, Weekend Rockstars tells the story of “the best week of my life” as told to us by Terry, a 26-year-old working in Tescos, going out with an 18-year-old college student, living at home with his mum, smoking weed and taking grams and grams of, well, presumably speed or coke. By the end, [SPOILERS] his girlfriend has revealed that she’s got into university in London (*and left for university*???), his gran has died (leaving him her house, which doesn’t seem to get mentioned again???) and he’s gone off on a bender with his mates where in some narcotic fuelled haze he decides his whole life is totally excellent, or something. [/END SPOILERS]

This is the bit where I go full-Billington, basically, I just wanted a bit more politics. It’s difficult, isn’t it? I mean, I know I’m just some privileged tosser anyway, and this piece is committedly (and successfully) as unpretentious as it’s possible for anything that’s still theatre to be. No problems there. But at the same time, I think there’s a pretty strong line of working class political resistance to the status quo, in both music and theatre – think The Fall to the Sleaford Mods doing Brecht, for example – where A Good Night Out doesn’t need to be sacrificed in the name of progressive thinking.

It’s interesting. Because, on one level, I think Weekend Rockstars does already contain this critique. Terry is clearly a problematic figure. And, no, I don’t really want the thing to suddenly present a big old finger-wagging at the end so we all know what to think. At the same time, his maleness, the male-focussed-ness of the narrative, the mother/girlfriend/checkout girl axis of female existence in the piece is a pity, not least because there are more women than men among the cast, and as musicians, singers and performers they’re pretty fierce. But the women they get to play aren’t really. So, yeah, I guess, as well as showing me how the world is/can be, I wanted a bit more hope/critique/aspiration of what we’d like it to become. (Also, if the company could recruit a few non-white members, that would also be super. This piece is – in many ways – the most English/British thing you can imagine; but, while the people who appear in it are all white, it feels incredibly dubious to describe it as such.)

Anyway, enough of the carping. I do think those things are important, but I really don’t think they derail the show. At all. I do think the show is hugely intelligent about what it’s doing, but I wonder if it doesn’t also just run the risk of glamorising a life of passive drug-taking and acceptance of powerlessness. (Bottom line: Terry needs addiction counselling, not celebrating).

Nevertheless, this is a properly exciting company. Go see them. Programme them in your venue in the autumn. Commission them to make a new piece. Weekend Rockstars feels like the start of something incredibly exciting.