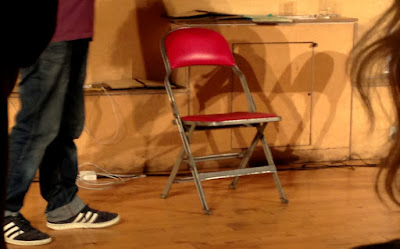 Imagine a continuum of British writers that runs: Mark E Smith, Tim Etchells, Stewart Lee, Sleaford Mods. You’d struggle to give it a decent name. The one I came up with yesterday was “fitful realism” (which is crap). I’m thinking of the way that they take the language of cliché, the commonplace, the everyday, and smash unexpected bits of it together. A motorway pile-up of familiar images and sounds turned into a twitching, menacing, surreal (and I *hate* that word) landscape. Stuff – all of which you’ve heard before, in different contexts – suddenly clusters together to create a picture of a world, or a language, that is savage, alien and out to get you. It’s like if you put all the words and phrases you’re used to hearing in a row, but rather than arrange them like normal to feel comforting, they are instead juxtaposed in such a way that they draw attention to the problems that they usually paper over. That language itself is one of the problems. And the idea of narrative. That’s one thing that Seeping Through made me think about.

Seeping Through is a new, improvised, durational piece made by the writer/performer Tim Etchells (artistic director of Forced Entertainment) and the astonishing violinist Aisha Orazbayeva.

The outline of the thing on the Forest Fringe website is pretty much perfect:

“...a rolling improvisation that combines and moves between spoken text and music. Taking place over an intense, continuous four hour period, the performance allows the public to arrive, depart and return at any point. Shifting from a looped interpretation of Etchells’ monologue Erasure, to a set of spontaneous fragmentary improvisations – text and music are treated as fluid forces in the same space, fading in and out of each other, breathing together, cutting and cancelling each other, creating a dynamic and always unstable landscape.

“Constructing the accumulating text collage of the work, Etchells draws on fragments from his notebooks as well as on excerpts from performance texts and works in progress, creating collisions, loops, and unexpected connections between different spoken materials. In Etchells’s solo work language is somewhere between its semantics and its ephemeral materiality as sound vibration, texture and rhythm. The technical virtuoso Orazbayeva meanwhile, plays the violin in a way that tests the instrument’s limits, deconstructing and at the same time uncovering new sound potentials as well as radically remixing and quoting from elements of classical repertoire.”

I saw the first and last hours of the piece – having to disappear in the middle, annoyingly, to be on a (lovely) panel discussion about fringe theatre at Leith’s only year-round pub theatre, The Village. I do wish I could have seen all of Seeping Through too, though.

The way Etchells speaks lines here is sometimes like the words of a man trapped in a dream. The non-sequiturs uttered by the sleeping. And every line is repeated. Several times. Possibly in groups of four, possibly not. Definitely not as uniformly as that suggests.

Each repetition of a line has a different emphasis. The lines – or, let’s be honest, not “lines”, but fragments of text, sometimes just a few words – intend something different thing every time. It reminded me of that bit in Some People Talk About Violence when they briefly do exactly the same thing (while eating cream crackers). Here it feels less like a fun drama school exercise, and more like each time the line is reiterated the sense is being interrogated. And like it’s Etchells’s duty to say the line in every possible configuration of the way it could mean something or be said before he can move on. Like every possibility/meaning/version has to be explored/spent. It’s a really great way of speaking text. I idly wish Benedict Cumberbatch’s Hamlet was eight hours of BC going through his lines in the same way until he’s said each one in a way that satisfies every single member of the fucking audience. We are hearing the words anew, over and over again. One result of this is that the text seems often to refer to itself and everything else as well.

Aisha Orazbayeva’s use of the violin is more inventive and holistic than the usual strings/bow interface familiar from, well, most violin music you’re likely to have heard. Some notes do still feature, repeated sometimes jaggedly for minutes at a time. Sometimes half-chords or even sequences of notes. But, just as likely are intricate scrapes, bashing the bow against the wooden body of the instrument, or playing the parts of the string past the bridge where only strangulated, high-pitched white noise is possible. In my notes I wrote “Helmut Lachenmann”. The German composer is really the only point of reference I have for this kind of anti-music. I was delighted to see that Lachenmann does indeed feature in Orazbayeva’s CV.

The interplay between music/anti-music and words (anti-prose) is sometimes subtle, unnoticeable, untraceable, subconscious, and sometimes stark, startling, and pronounced.

The is also an interplay between performance and performance space. The light-coloured wood. The orangey lights. The oppressive heat (it really is ridiculously hot in Forest Fringe’s studio, espciailly when a performance is four – or six – unbroken hours long). The whole thing gets rather yellow-coloured. It’s a bit like watching art in a sauna. Even the door to the outside takes on a kind of artistic function, the occasional cool breeze, cold light, and burst of chatter when it’s opened both welcome but distracting. A sort of random white-noise generator.

I think of the random Dostoyevsky quote “O, you horses, what horses!” from Deer Park’s See You Swoon, NSDF 2003, which Andy Field and I were telling Lyn Gardner about on Monday.

“The way that the tape is decaying...” says Tim Etchells, which reminds me how I’d already thought how Seeping Through was like a textual equivalent of William Basinski’s Disintegration Loops...

I was also thinking about the conversation we had with (an)other Forest Fringe co-director, Deborah Pearson, about her PhD, which is partly about narrative in Performance (I’ve almost certainly misrepresented that). And how this piece plays with ideas of narrative. How our understanding of, well, almost all performed sentences, lead us to initially conclude that what we’re hearing is a “story”. And how, because of familiarity, these stories don’t even need to be told us in full. So cinematic/imaginative are our brains that we maybe immediately imagine the speaker, and the room and the addressee, and everything else, just from one fragment of text. (I suppose I’m referring to “text” because we can see Etchells picking up cue-cards and notebooks and suppose that he’s reading from them.)

More lines from everyday life: “Please do not reply to this message.”

There are descriptions redolent of of urban decay. Depopulated wastelands. My own Pomona visual-default.

Violin: sounds like anything except a violin. There are whole stretches where it sounds more like a horn...

The eye-contact. The disconcerting shifts of mood. Quietness. Understatedness...

The language of business...

A sad drunk in a pub. The failed memory of last night. [+ note to self RBQC]

The idea of the paranoid performer. “Why are you all looking at me?” his glances at us seem to ask. He looks behind himself. Sitting on that chair.

“Where time is measured in fractions of seconds...”

It makes more sense written down once. You lose the sense of words or meaning connected during the repetitions...

Heat in the venue.

“Bad things happen, not only in literature.”
“Add injury to insult.”
“Keep it simple” x 32.

“Something more than words...”

Not a pre-planned end-point. Almost – seemingly – arrived at whimsically. But a whimsy of endurance.

There is nothing else like this on the Fringe like this, this good, that I’ve seen. And while I’m pleased to have seen something so brilliant and one-off, I’m also kind of furious that there isn’t more like this. It’s the 21st Century. Why are the so many “finished” “plays” FFS?


[and there's never a bad time to link to this again]