Some People Talk About Violence is great.

I went along knowing only that I *really liked* the company’s last show. To be honest, that is as much as I’d want to know before I went, so – the fact that criticism isn’t a consumer guide notwithstanding – I’d say: go and see Some People Talk About Violence now and then read about it afterwards. 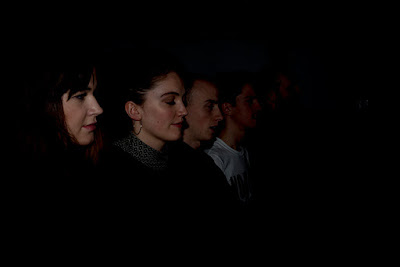 Some People Talk About Violence is a properly brilliant piece of theatre. Barrel Organ (in this instance) are (nominally, on the programme,) a company of one writer, six performers, one director, two dramaturgs, and a technical manager (and many thankees). Only four of the show’s six possible performers appear in any one performance of Some People Talk About Violence, and none of them know which part they are going to play until they are handed an envelope with one of the four parts at the start of the show. The programme goes on to say they don’t know “which sections of the show they would perform” either.

Some People Talk About Violence is a brilliant title.

What’s remarkable about Some People Talk About Violence is that, in Some People Talk About Violence it is actually very rare that anyone actually names an overtly violent action, let alone talks about it. To the best of my recollection – or at least in the sections I saw today – no one is describing some punching, or some kicking, or a beating, or a sexual assault, or something. Or wars, or genocides, or ethnic cleansing, or rape camps, or the A-bomb.

This might be a wild misreading, but I think the strategy of Some People Talk About Violence is – using a series of monologues, sometimes interspersed with a series of games that practically reinvent the V-Effekt before your very eyes – is to make us think about a much wider sense of what violence really is; what even is a violent action? And, beyond this, to think about the idea of structural violence. While watching it, I found myself thinking back to James Graham’s The Angry Brigade *a lot*. When I reviewed it, I think I was quite harsh on the effectiveness of the production. It turns out that actually *so much* of it has stayed with me, especially in the way that the ideas of the organisation were unpacked and explained in the first half. I think Barrel Organ have really thought about what violence really is. Where it starts. What makes people violent, but also where violence stems from, and what is violent without ever even being acknowledged as such.

In theory, the piece tells the story of a young woman (the number of times they call her “a girl”, let’s maybe think about the violence of that). She is unemployed, she breaks into a house, she is arrested, she calls her brother who lives in Thailand with his boyfriend, he calls their mother, he agrees to come home. These events are told in fractured first person sections (three of the cast randomly assigned play Brother, Sister, Mother – maybe these names are violent? – the last cast member is the Narrator). Different bits of experience are related to us. Some work-interview at the Job Centre. The imagined responses of the career officer person. The imaginary worlds the siblings created. The mother’s relationship with her daughter. We essentially look at these relationships and she how *violent* they are without a single blow ever being thrown. And above and around them, the violent structures, the unannounced, unarticulated, unidentifiable state violence that makes these personal relationships violent.

But, Christ the form, too. Bloody hell.

Of course the form here can’t be divorced from the content, and as is clear from the above, one can’t be described without reference to the other. But, bloody hell, this is some thoroughgoing stuff. And also, like, the best grab-bag of influences going. The three most obvious are (again, interestingly) Forced Entertainment (but this time Quizoola, Speak Bitterness, etc.), Martin Crimp, and most excitingly, Secret Theatre’s Show Five (reviewed here by one of Barrel Organ’s dramaturgs). I find the possibility of this influence especially joyful. Barrel Organ were already smart; they were smart back in May 2013 when they first did Nothing as phone calls [I think that’s when], seeming to be influenced by Show 5 doesn’t feel like plagiarism. It feels like a cross between a tribute, an acknowledgement and a nod. Sure, I had a tiny bit of Difficult Second Album fear for them. But, if anything, Some People Talk About Violence is even better. It’s smarter, more difficult, more assured, more clever and more political. It feels like a company picking up Brecht’s ideas about political theatre, inspecting them scientifically for veracity, effortlessly working out how that could work in a modern UK context, and then just making this incredibly astute, searching, honest, raw artwork, but presented in such a way as to never once draw attention to either cleverness or difficulty. It’s just as entertaining and fun as it is entirely serious and political. I basically love Some People Talk About Violence.

And, seeing it again, it’ll be *really different*.

I am so seeing it again. ASAP.

[Meta-bit: Critics are terrible people – as we already know, right? – but one of the MOST ANNOYING THINGS THAT CRITICS DO is to give things names and make movements, where before there were individual (and unrelated) acts of creation, and MOST ANNOYING OF ALL: PUT THINGS INTO THREES AND CALL THEM “A TRILOGY”. Some People Talk About Violence is the third part of the Warwick Trilogy (the other two bits being Lemonsx5, and The Beanfield). Formally they’re really pretty different (although I reckon I could write a whole essay about the common influences on Beanfield and Violence), but I think thematically they’re *really close*. It stands to reason too. The systematic, institutional violence deployed by the University of Warwick against its own students – while Walrus, Breach and Barrel Organ were studying there – is disgusting. Even in the abstract. In the concrete, it must have a really profound effect on a person. And that is why all three pieces each deal with feelings of helplessness, hopelessness and attempts at resistance in the face of an absolute, unwavering, institutional power. If Warwick University has given these students one thing, it’s a sharpened sense of what Austerity Britain feels like at the business end of a fucking taser. And unstoppable, endless, creative rage.  Which, ironically, is probably the best education we could hope for for our theatremakers.

I wrote that paragraph first before the rest of the review to get it out of my system, but frankly I’ll hunt down anyone I catch nicking it as a thesis. These companies are Much Too Good to be cursed with Trilogification...]
Posted by Andrew Haydon at 15:55