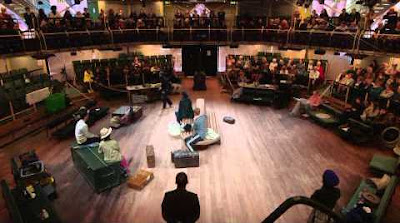 There’s *another* fun maxim in theatre criticism that you should “judge work on its own terms”. [I wrote about it before here.] The thinking goes, that there’s not much point lambasting an innocent, fun, family show for failing to serve up sublime beauty, adrenaline-fuelled fury, or something theatrically-epoch-making. Critics should also allow for modest ambition.

None of which is to say that Paul Hunter’s attempt to revive the remains of Arnold Ridley’s The Ghost Train is modest in its ambitions. Far from it. Indeed, were it not a revival of a light-hearted 1923 supernatural adventure spoof, the scale and scope of the dramaturgical reinvention here would look positively Teutonic. In fact, oddly, the first film of the play was indeed more than half-German, and I think this staging owes something to that film too. In fact, for the first scene, Hunter even wheels on a foley table, and you get a snapshot of what might have been, had there been infinitely more time to rehearse, greater budgets, more cast members, etc. (Honestly, that section is probably the funniest five minutes of the whole thing.)

But, after this, the special effects are stripped back, or become more to do with absurd physical comedy – if you’ve not seen any Told By An Idiot before, their nearest theatrical neighbour are Kneehigh at their daftest – and indeed there is quite a lot of crossover in terms of personnel between the two companies. (Usually Hayley Carmichael.) They’re quite funny. Uproariously so if you like that sort of thing. But, on Tuesday night, even with the best will in the world, some sections felt a bit on the flat side – like they hadn’t quite found the internal motor for that particular bit, yet.

Do you want to know about the story? I promise it doesn’t matter. It’s set in the 20s. Passengers on a steam train have missed their connection and are stuck at a country railway station miles from anywhere in Cornwall. An elderly station master tells them the legend of the ghost train that passes through the station and the previous station master who died of fear from seeing it. There are a pair of married couples, a elderly woman and her parrot (played by Joanna Holden), and an annoying Woosterish upper-class-twit chap. A lot of plot happens, but very quickly, and mostly at the end. The rest of it, well, some bits are funny and some bits will probably get funnier.

In terms of socio-political import, well, you could make some up if you felt like it, but it would look odd trying. In short, it’s a decent stab, in a particular style, at a fun family show. And I think it will probably get better as the run goes on, and the mechanics of the routines become even more second-nature to the talented and game cast.
Posted by Andrew Haydon at 16:07