To be honest, I didn’t do a lot of research before booking to see this production of Thomas Bernhard’s 1970 novel (yes: novel, not play) The Lime Works (“works” in the sense of “factory”). If I had, I might have counted the number of cast members (one) and concluded that my re-introduction to Deutsch Theater might be better served by something a bit more active than a monologue. On balance, I think I’m glad I didn’t do any research.

Thomas Bernhard is a difficult bastard. Here’s the synopsis of the novel on the Schaubühne’s publicity: “For years, Konrad has longed to write a unique treatise on hearing. To finally give himself the time and opportunity, he buys a house in a remote lime works. In this seclusion, far from the disturbing influence of society’s hustle and bustle, he begins work on his masterpiece. His sick, paralysed wife serves as his guinea-pig: for days, weeks and months he experiments with the effect of various consonants, vowels and vocal-groups upon her. But Konrad is unable to put his thoughts down on paper. When he has a dream in which his wife can move, the truth suddenly hits him. She lacks both the discipline and the respect to help him with his experiments. Konrad can see only one way out: he must kill her. What happens when someone fails to live up to their own expectations and life is thus rendered pointless?”

Bernhard’s novel itself is “told through a hypnotic wave of voices – the people of the small Austrian town nearby” (Wikipedia). On stage, it seems that the single performer, Felix Römer, is more embodying the scientist Konrad himself, although he begins dressed in what could be taken to be the nightie and red Dorothy shoes of the wife. Let’s be honest, he’s a middle aged bloke sat in a massive three-sided reflective cube, I don’t think we’re meant to think that’s what Konrad’s wife *actually* wears. But, y’know, in terms of where it’s going allegorically, it seems more like Römer’s inhabiting Konrad while also sometimes hinting at the wife. Perhaps with a fuller grasp on the text, it’s more apparent that he’s being lots of other people, or perhaps the Bernhard have been shaved so that the impression is more of these two subjects (the programme – unusually for Germany – credits Austrian director Philipp Preuss with an adaptation).

For the first forty five minutes, if I had any feeling other than generally watching, listening, and taking in the meaning as best I could, it was a vague sense of concern that I really couldn’t get a grip on where the director (or Bernhard for that matter) was with what is, after all, surely a really problematic text – even in synopsis. I think I’ve remarked before that Bernard usually only escapes the charge of misogyny by virtue of how hard he also hates men. And how mostly he hates Austria most of all. (And what Austrian artist doesn’t?) Nevertheless, I was all at sea for a good long while with what I thought this piece was achieving.

Then there’s a moment. The two motifs of the performance beyond the “costume changes” have been Römer sitting in the sole chair on set contorting under a bright white light in the manner of a pope in a Francis Bacon painting and the playing of Viennese waltz type music. At about one hour in, Römer leaves the cube and comes back with two buckets, water and flour. He pours the water over himself and goes off to fetch two more buckets. He tips the flour over himself. The other two buckets turn out to be egg yolks and schnitzel breadcrumbs. He tips the other two buckets on the floor next to the remains of the flour. If you’ve ever prepared your own schnitzel the line up is totally familiar. And this is what Römer does, to the strains of the most familiar Viennese Waltz after the Blue Danube, he proceeds to cover himself next in beaten egg, then breadcrumbs. It’s a brilliant, appalling-to-look-at visual statement of hatred against Austria. (At least, that’s how I read it.) All at once, a clear directorial take on the text is revealed. And it’s worth the wait. Preuss, himself, an Austrian, has, I think, very firmly decided that a plausible main thrust of this weird, horrible story is a kind of condemnation of Austria – at least, the Austria of the 1970s, which, given the glacial rate of change in Austria, is probably still relatively true now, give or take living Nazis in positions of power.

It’s an interesting thing to note in passing that Britain has never really produced this kind of novelist, or if we have, we don’t/won’t like them much. Maybe Martin Amis gets closest by virtue of his intense dislike of, well, increasingly everything except his own ever-worsening prose. But on the mainland Bernhard and now Jelinek and Houellebecq seem to command ever more respect the more they despair and dislike things. The gloomier their analysis, the more their mainland fans hold them up as paragons of analysis. I’m not sure how I feel about it, really. It’s the sort of thinking that gets dismissed as “teenage” in the UK, but the UK’s done pretty well out of its teenagers over the years, from the Sex Pistols outwards. So, yes, on one level there’s a sense of an incredibly strange and probably depressing (to me) story told here both to amuse and to make-think-widely (something else we seem not to do so much in UK – the thought we tend to want provoked tends to be quite directed), while also being used as an attack on its very foundations. As a re-entry point for German-speaking Europe, it feels apt, somehow. 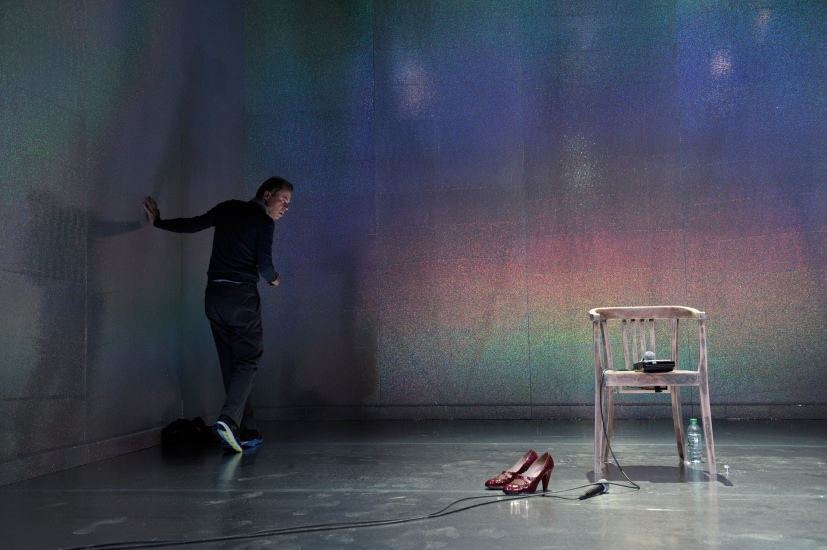