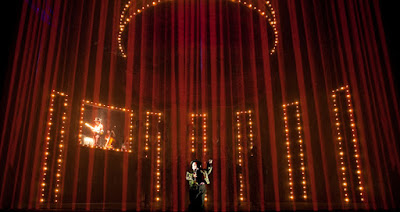 Funny thing about Art: what you want and what you need can be very different things.

The opening of HOME yesterday was lovely. At five they had drummers, music, leader of Manchester City Council who said some excellent things about why wouldn’t you invest in culture during austerity? “Who the hell wants to live in a city which has no arts and culture?” he asked. Which was lovely. And there was Danny Boyle! Welcome HOME, indeed. And, you know, it did feel pretty bloody special.

On the face of it, it’s a funny choice of a play to open a new theatre. After all the celebrations, you get this 2hr15 (inc. interval) really quite depressing tale of the inevitability of abandonment and/or heartbreak in a recession, and the fickleness/meaninglessness of young love; how workers are exploited by the bourgeoisie, and the wafer-thin veneer of civilisation over violence, crime, rioting and the inevitability of death. This is a play whose constant refrain is „Sterben müssen wir alle!“ (we all have to die). “Get Happy!” it ain’t.

So, that’s the first thing. It was just plain weird to come off the back of all the lovely, slightly giddy meet‘n’greet and catching up with old friends in the blazing sunshine and be ushered into the darkness to face down the sea of troubles.

The second thing is, well, pretty much exactly while all that was going on the Guardian posted my latest ode to Anglo-German joy. So, given that the Funfair is a British adaptation of an ostensibly German play (written in German, originally set in Munich), directed by the UK’s first (Amsterdam-born) German artistic director, in a version by Britain’s biggest theatrical export to Deutschland since Sarah Kane or Shakespeare (there wasn’t a lot in between), I think whatever this had been like, it probably couldn’t have been quite as much as I’d want it to be. And, as Meierjohann makes clear in this brilliant interview with Catherine Love, he’s thrilled to be able to abandon German theatre’s insistence on “a concept”, when I guess I’m equally thrilled when British directors start adopting it. Ah, Otherness, such an annoyingly two-way street. So, yes, if I’m being honest there are a couple of recent German productions (Köln at Theatertreffen in 2010, or Castorf in München 2011), whose designs I *much* prefer (though, God knows, I was grateful not to be sitting through something of Castorf length and rigour last night). So, y’know, I’m probably not about to offer the most objective view on the production.

So, having got all that waffle out of the way, shall we talk about The Funfair itself?

HOME Theatre 1 is a rather beautiful auditorium. Narrow, intimate and high. I watched the first half of the show in stalls row F, which, given the way the stage had been extended was pretty damn near the front. I watched the second half from the upper circle (I think it’s called, second/top balcony, anyway). Sitting in the stalls, because of the relative narrowness, the proscenium feels like it towers over you, and even near the back of the theatre high-up, you still feel pretty close to the action, and with a better birds eye view down onto the movement on stage.

The piece opens with James Lusted, a Welsh actor, probably under 4ft, wandering onto the stage in spangly jacket and top hat and announcing the scene. Around him is a (fake) concrete cyclorama (like Saal C at the Schaubühne) with high doors outlined in light bulbs, and on one side, in a window set into the wall, a band, led by guitarist Joseph Runham, whose plecturm arm ends at the elbow. So far, so brilliant, right? I mean, yes, by German standards Ti Green’s set is impossibly neat and contrived. The garishness hits that precise English compromise between over-the-top and stark minimalism. If John Lewis made tasteless fairgrounds this would be it. That said, for all its not-quite-ugly-enough-ugliness, it’s kind of great at the same time...

Cash and Caroline (more usually Caz), burst onto the stage and pretty much immediately split up. Ostensibly because he’s lost his job, and losing his job has made him aggressive and argumentative. The costumes, outside of the band (basically dressed as the Tigerlilies) and Lusted’s Tiny/Narrator, are contemporary but schematic. Caroline (Katie Moore) is obliged to wear a curious white fishnet dress with period features, while Cash (Ben Batt) and his Scouse mate Frankie (Michael Ryan) wear vintage seventies leather jackets. Caroline goes off in search of funfair funtimes with shop-worker John Chase (Rhodri Meilir) (whose costume, incidentally, is a ludicrous green-pastel jacket with yellow shirt). Later, there are two straw-target, cigar-smoking bourgeois shop owners in and a freak-show of enormous-headed, grey-faced mask-wearers.

From what I can make out, Stephens’s script runs remarkably closely to von Horváth’s original. Yes, language, as well as being translated, has also been updated, and place names altered so we are mostly, specifically, in Manchester. In terms of when it’s set, however, the excitement at seeing a Blimp/Zeppelin feels as much to do with the 1929 original as now. And similarly, the freak-show section of the piece – so many shades of Secret Theatre’s Woyzeck – remains intact.

The way that the play operates is, in that German tradition, of one thing happening after another. It doesn’t feel so much plotted as allowed-to-transpire. The encounters, though pregnant with symbolism, at the same time have a curious sort of inconsequentiality to them, or rather, they do have consequences, as they would in real life, but as in Woyzeck, Baal, and maybe Glaube, Liebe, Hoffnung, the things that happen, their symbolism, and their consequences feel way more random than in anything English I can think of (although maybe Stephens does get closest to it in things like Harper Regan and Motortown). And, here again, we get back to that “what you want and what’s good for you” question. I mean, I’d have quite liked something a bit more defiant and hopeful, but von Horváth is pitiless and analytical. In this story, characters – about whom we’re never really allowed to feel very much, and none of whom feel very friendly – confirm worst case scenarios. In fact, it’s more like a stage adaptation of Leonard Cohen’s “Everybody Knows”. This *is* a world in which men knock women about. In which couples break up because of economic pressures. In which the poor stay poor, the rich get rich. British theatre, I think, tends to dramatise stories of hope, or at least romanticise the despair. This just gives it straight.

At the same time, and perhaps strangely, given what I’ve said about the design, there are actually some really great moments and stage-pictures. I’m not sure any production has every come together more in a single moment than when the house band suddenly play Iggy Pop’s “The Passenger”. Elsewhere, when the red circular curtain that’s loomed over the stage throughout finally descends for a scene in which Caroline rides round a tent on a horse, the effect is almost a direct lift from something you’d expect to see in the Black Lodge, as is the projected red curtain that “falls” for the interval. Similarly, the largely fifties soundtrack, augmented by Nick Cave’s “Push the Sky Away” and “The Passenger”, is gorgeously curated.

Fans of finding fault with Stephens for the sexual politics of plays from 1920s Germany, the costume choices of female designers, and representations of the violence against women that is still a daily fact worldwide will doubtless be delighted to find more to grumble inconsistently about here. Yes, von Horváth’s play is pretty bleak in its outlook and Stephens’s version does nothing to mitigate that. None of the characters come out of it well, and neither Caroline’s blank acceptance of John Chase, nor Cash’s similar union-of-failure with Frankie’s depressed girlfriend Esther really paint any picture of authorial (or auteurial) blessing.

It’s hard to know what to conclude. “Like” or “dislike” aren’t the question here. Nor, really is “agree” or “disagree”. This is art. You don’t even have to like it for it to trouble you, and for that troubling to be the point. I think I’m definitely going to keep thinking about it. And, in a way, I think what both von Horváth and Stephens have written, and what Meierjohann has produced, are provocations. Provocations for us not to accept the world as it seems to be at the moment. Not to accept the way it’s heading. And, I think this depressing outlook from 1929 Germany, this anaylsis of where a seemingly civilised-and-quiet-if-sometimes-fractious might be headed, is one that we can’t simply ignore. Even while they are building us nice new theatres. However much we might wish it weren’t so.


Push the Sky Away:

The Passenger (live at Manchester Apollo, 1977): 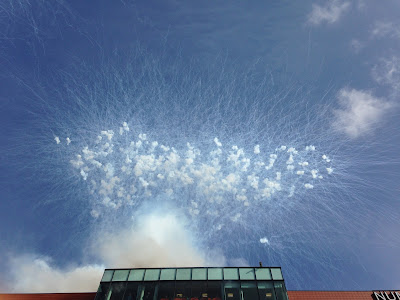 I used to go to the “Library Theatre” at central library and was devastated to be told when central library reopened that the theatre had gone. I said “But I have waited four years for this opening”. I was told that the Library Theatre had combined with the Corner House and Manchester was going to have a ban new theatre. Opening, she said, “about next Easter.”
At the first opportunity I booked to see the first production “Funfair” and took a friend who had not been to the theatre for quite some years.
I was so pleased to see the building and was most imprested with the seating, we sat at the front of the circle.
The play started and very soon I was so disappointed, I hated it and at the interval apologised to my friend for bringing her and we both agreed to leave at the interval.
I visit The Lowry, the Palace and Opera House. I go to The Royal Exchange, Oldham Coliseum and my favourite of all The Bolton Octagon, where I have never been disappointed with a production. I expected the first production at Manchester’s new theatre to be quite something. But, my goodness, what a let down. I have booked to see “The Oresteia”. I am looking forward to the production in the hope that “Funfair” was a horrendous blip. Garry Basnett Rochdale