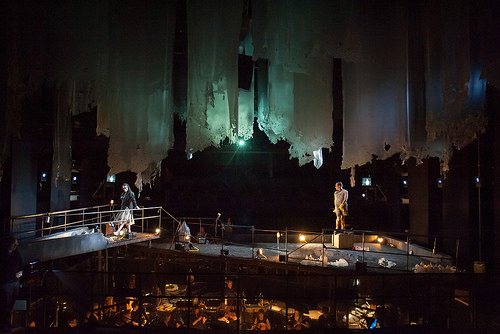 Luca Francesconi has created this chamber opera from Heiner Müller’s play of the same name. The programme has it as “based on the play by...”. That is my impression too. Where the play feels like slab after slab of granite-like monologue, here the action remains relatively light and dialogic. I’m afraid I don’t know if the piece was written in English (I can’t find a translator credited; libretto also by Francesconi), but either way, it *feels* different to how I remember the Müller being. So...

Heiner Müller’s Quartett is kind of his “popular” play (along with Hamletmaschine). Based on Laclos’s Les Liaisons Dangereuses, it’s set in (I paraphrase) “18th century France and in a bunker after World War III”. Müller claimed his play was an exploration of the problem of terrorism. I think that element more than any other has perhaps been lost in this transposition from theatre to opera, but perhaps I’m not looking at it laterally enough. However, without the vast monoliths of text, I’m not sure that’s possible. None of this is a gripe or a complaint, btw. I’m a lot less worried than fans of Dangerous Liaisons would be. It’s an adaptation *and* a translation. It’s bound to change.

Something fascinating, both about the opera and this (World première? Definitely British première) production of it (dir. John Fulljames), is just how hard it tries to make *everything* kinetic. There does feel like there’s a morbid fear of letting the audience get bored or lose track of what’s happening.

Soutra Gilmour’s set has landed very firmly on the post apocalyptic side of the putative equation. Tattered white material hangs from the ceiling over the “stage” – two precariously adjoining gantries hanging in traverse *above* the orchestra. *This*, at least, is pretty much the coolest thing I’ve ever seen in the Linbury studio. It’s a brilliant set. I’m not totally convinced it’s a brilliant set for this show, but, Christ, if anyone ever writes Aliens – The Opera, then this is absolutely the set for it. No question. Ravi Deepres adds video design – projected onto the tattered white sheets above – which for the most part looks like micro-organisms, perhaps bacteria multiplying under a microscope. The last image, counter-intuitively, however is that of a butterfly, suggesting a Merteuil emerging out of some sort of chrysalis. It’s a nice thought. Perhaps a bit too nice for this piece...

But, I’m too hard on the set. What it achieves dramatically is a really tight, focussed playing area. *Everyone* in the audience gets that bit closer to the action, and it actually does serve to usefully limit the possibilities for how the drama, how the playing, the performing happens. It’s like a fencing match – both players parry and thrust up and down their ruined promontory.

While I got what was going on – same as the play: “Valmont” and “Merteuil” talk to each other, then Valmont pretends to be Tourvel while Merteuil plays Valmont, then Merteuil pretends to be her neice while Valmont as himself re-plays what is effectively his rape of her. “Merteuil” then kills “Valmont” with poisoned wine (the “poisoned wine” here played by some petrol) – what I found really difficult was processesing the levels of reality. This is entirely my problem rather than a problem of the production. Or maybe it is slightly a problem of the production, insofar as there’s so much cultural disconnect here that even the fact of the opera/music elements making the dramatic action function so well seemed to make taking on board what reality we were dealing with interestingly problematic. What I mean is this: in the Laclos novel we can kinda buy into “the reality” of the characters. We can pretend we’re reading their real letters, rather than an authored novel. Similarly, even in the daft Hollywood movie, we are expected to pretend that John Malkovich and Glenn Close *really are* Valmont and Merteuil. Or something. *Very annoyingly indeed*, I’ve never seen Heiner Müller’s actual play performed, but I imagine the lack of an orchestra makes the relationship of “character”/performer to stage and to audience that one bit more simple to negotiate. Here, not only did it feel that “Valmont” and “Merteuil” (_ _ and _ _ on the night I saw it) played other characters, it also feels from the outset like they’re some unnamed survivors of a nuclear holocaust playing even those initial characters. Which is fair enough. And possibly even the intention. And the fact that this keeps on bringing you up short in terms of “investing in the ‘characters’” could be seen as a huge Brechtian/V-effekt positive too, although I wondered if a little too much had been stripped out of the text to make it accessibly whizzy to then feel the full force of the politics.

The music here is very much in the register of contemporary opera. As such, it’s quite hard to describe with reference to much else besides contemporary opera. I’ll try to paint a little thumbnail sketch (which will probably be everything I know about contemporary opera), as a kind of scale on which to try to plot where it sits within the milieu . Let’s imagine a scale where Philip Glass’s Einstein on the Beach is at one end: melodic, repetitive, ultimately hum-able and easy enough to grasp. At the other end of this axis is, let’s say, Helmut Lachenmann’s Das Mädchen mit den Schwefelhölzern (The Little Match Girl), which I’d characterise as more or less the precise opposite: musicians abuse their instruments, nothing seems to be repeated, no motifs announced themselves, it is arrhythmic, jagged, at times more like the sound of an orchestra falling down the stairs than “music”. I think it’s amazing. None of that is criticism of it, but it’s about as far from Einstein... as it’s possible to get, I think. In the middle of this, I reckon, is something like George Benjamin’s Written on Skin (libretto: Martin Crimp; there directed by Katie Mitchell). Where the music is jagged and “difficult”, but regular enough to get a handle on. If that’s the X axis, then I think I might propose a Y axis that runs from Gerald Barry’s The Importance of Being Earnest at the top, which, while very modernist itself, is also playful and witty, through to Wagner at the bottom, which, as far as I can tell, is never intentionally hilarious. On this cross, I think Quartett errs toward the bottom right, that is: more Lachenmann than Glass, and more Wagner than Barry. It has a lot of notes and no tunes, but does have a propensity for drama much more than irony or theory. (Christ, that was difficult. Are you still reading?)

Put another way, (unusually?) for a modern opera, Francesconi actually facilitates, draws out, even enhances the audience’s understanding of key moments of conflict with his score. He effectively directs the piece himself. There’s no option for the actors (they’re singers, Haydon, do keep up) to take a different route through the psychology, the score’s done it all for them. Fulljames directs this with clarity, and while being grateful for the clarity, I could help wishing there’d maybe been a bit more austerity (I’m not letting the Tories have that word. It’s a good word for lots of things, and a crap euphemism for what they’re up to). It did feel like a lot of the cold-blooded, analytical bleakness of the text had been made a bit, well, hot-blooded and passionate. I’d hate to trade in national stereotypes, but it might be precisely what you’d imagine happening if an Italian got their hands on something East German. Absolutely nothing wrong with it; it’s an adaptation, an appropriation to the composer’s own ends. But, well, if I could compose opera, I’d hve done it differently. (Is there *ever* any point in a critic flagging that sort of thing up? Almost certainly not, but at least I’m setting out my stall honestly. It’s a taste thing. One really *can’t* be objective about these things, so why pretend otherwise?)

And that’s pretty much it, really. I think as a production of this opera it’s a very good one. I think the opera itself is good. I think I possibly came to it with a bit too much pre-expectation/baggage, but on the other hand, I can’t imagine what it would be like to watch without any preconceptions at all. Excellent programme notes notwithstanding (hem hem), I do actually think the opera allows you to learn how to watch it, perhaps even at the expense of a bit more possible complexity.

Still, an effective night out (it’s closed now, but...), if not a shattering or truly interrogative one.
Posted by Andrew Haydon at 11:43

Great review. We could do with more criticism of opera (contemporary or not) coming from a score-sympathetic theatrical angle rather than from the usual classical music/opera specialist angle!