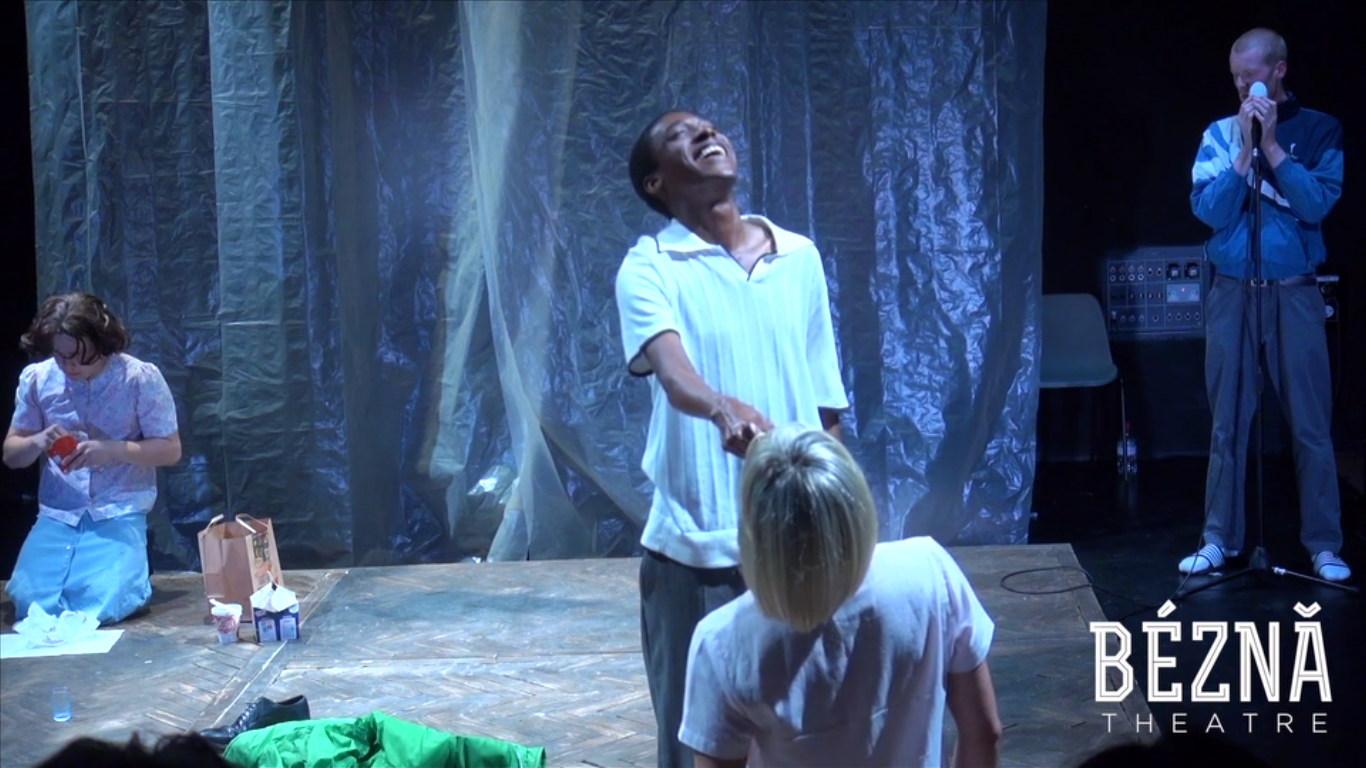 Let’s not beat about the bush, CRIME is one of the most exciting directorial debuts it’s been my privilege to witness. It’s a nasty, brutish and short adaptation of the Dostoevsky novel, and the title has been truncated for a reason. Updated to early nineties Russia, this is a world of simply crime without consequence. Just crime after crime after crime.

It opens – a bare stage made of slabs of parquet flooring roughly nailed together, thick plastic drape backdrop; like an abattoir in an old mansion (great work by Robin Soutar) – with a five or ten minute lecture from Milton Friedman (played with unctuous conviction by Oliver Longstaff) on the evils of welfare states and the necessity of the free market. From there we’re dropped into the nightmarish world of the student who has to pawn his watch, his shoes, whatever he’s got, just to keep up the interest payments and rent on his flat. The single mother, raped by gangsters to whom her husband owed money, and who later sells her daughter into child-prostitution.

Nico Vaccari’s production (of his own no-nonsense script) is a real joy. Taking its cue from that tradition of eastern European poor theatre, the four-strong, all-male cast inhabit the space in costumes which are neither kitsch nor psychologically convincing. It is “theatrical” in all the best senses of the word. Theo St.Claire’s (female) Pawnbroker, for example, never descends into parody nor ascends to camp, but is just a man in a wig playing a part with charisma and wit.

Similarly, the way in which Angel Perez-Silva plays both the child of the single mother and the Student’s elderly mother is entirely without camp or kitsch. If there are laughs here, they’re of the blackest sort, the kind of noise you make when everything has just got so bad and so grim there’s only one response left. Vaccari also isn’t afraid of space. The scene in which “the consumer” rapes the child – simply symbolised by St.Claire rolling a condom onto his fingers and then inserting them into Perez-Silva’s mouth – is unbearably long, silent and completely static. He just stands there, the “child” knelt before him, condom-ed fingers in mouth. For literally minutes.

Against this grimness, there are musical breaks. Well, I say *against* the grimness: Oliver Longstaff sings Nina Simone’s ‘Feeling Good’ with a startling accuracy and power; Theo St.Claire does Ernie Ford’s ‘16 Tons’ at a fraction of the speed of the version under that link (or below) turning it into a proper raw cry of despair; Mathew Wernham (the Student) acts his way through Leonard Cohen’s ‘Everybody Knows’ before leading the audience in a singalong of the chorus; and Angel Perez-Silva – crucially not in character as the child while doing so – delivers a note perfect, throat-shredding redition of Nirvana’s ‘Rape Me’.

There’s an almost Brechtian unwillingness to let the audience actually get emotionally involved in the characters (and indeed, the plastic backdrop is sprayed with the legend: “Tonight a crime will be committed”). What’s shocking – beyond Friedman’s cold-eyed contempt for humanity – is how fresh and urgent it feels as a style. I’ve been thinking about it, and I was going to characterise it a “regietheater” but, despite the presence of dramaturg Sinziana Koenig, I’m not sure that’s the right way to describe it. Sure, there’s an incredibly strong directoral vision here – although one that feels entirely collaborative rather than top-down or dictatorial – but it’s neither one that is “serving the text” nor bringing a “concept” to it. Soutar’s unshowy but deft design certainly plays a crucial role, as does Vaccari’s script, although this is a constantly re-written beast, improvised around by a frighteningly committed cast and, on-the-page, all the instructions are given in past tense, which perhaps gives an insight into the experimental way in which the production was made. There are a lot of open spaces in the script too – the opposite of a prescriptive document to be served.

Most important about play and production is the sheer sense of anger at the world of late-capitalism. At the nihilism of monetarism and the free-markets, the lowest expectations of humanity in Friedman’s thinking, and the fact that more or less everyone (the 99%, perhaps) has been sold out, for the worthless luxury of the very, very few. It’s not a piece that suggests answers, it’s not even a piece which clearly diagnoses the problem – the poor characters do behave disgustingly, and in ways that can’t just be blamed on their poverty – but you see that a rotted society where everyone has been let go to the wall, the conditions for the worst of human behaviour is sown, ironically by the worst imaginable human thinking at the top of the scale. Like I said, CRIME is fucking angry and it’s fucking bleak. And it feels exactly like the play that today’s Britain needs most right now.