[Seen in final preview performance. But, paid for my own £12 Travelex ticket day seat at rear of circle, so can do as I bloody well please. Press Night embargo observed because I'm still kinda old school] 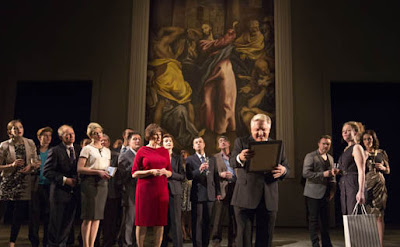 Nicholas Hytner's new production of Timon of Athens is a strange beast. It's opening in mid-July, it's Shakespeare, and it's got Simon Russell Beale in the title role. And yet it's an odd shape for a summer flagship. Perhaps there's a certain amount of trade-off in the thinking – on one hand, it's Shakespeare, it's got a star, and it's got a kind of relevance what with is being about money an' all; on the other hand, it's got to be just about Shakespeare's least popular play, lots of people are probably going to miss it, and, well, let's not throw too much money at it.

That said, for all the curious cynicism you smell around the edges of this already cynical little play, Hytner has at least had a reasonable looking stab at giving the play a fair, contemporary hearing. Much of the musing that follows has been made possible by the sheer clarity of the production.

There's a chance you might not know the plot of this least-known, most minor of Shakespeare's tragedies and, I secretly suspect, there's not much chance you're going to bother going to see this production – it's not, after all, the kind of avant-garde fun that Postcards' ever-dwindling readership appears to thrive on. So I make my apologies now for the following being a bit describe-y and spoilery.


Timon of Athens is essentially a play about an idiot. Yes, true, there's a superficial level of amusing contemporary mischief to be made with the fact that first of all it is a Shakespeare play about bankruptcy, and secondly, that it happens to be set in Greece. But, sadly for Hytner, and all other contemporary directors, that's pretty much where the actual relevance ends. What happens, you see, is that at the start of the play Timon is very rich – here the first scene is set at opening the “Timon Wing” of an art gallery with a big, big painting on its big flat wall. Over the next few scenes, we see Mr Timon generously throw his money around – paying a servant's dowry here, posting a friend's bail there, giving jewels to the guests at another of his sumptuous dinner parties. All in front of the same big flat wall, with the painting removed to reveal a big, big window, giving onto a variety of recognisably trope-y views across London (here, his mansion in Kensington; there, his office in the City; elsewhere, the House of Lords).

Then, lo and behold, by about a third of the way in, he's frittered all his money away. Oh no! What to do? Well, Mr Timon sends his servants whizzing round his friends asking to borrow a bit of cash. Mostly in multiples of 50,000 (the currency is as unspecified as the are numbers changed). And, well, as you can probably guess, his friends refuse. The press gather outside his house, with its big, big window set in a big flat wall, as do those to whom he owes money, and to whom Shakespeare gave lines.

To give Hytner his due, much of the contemporary updating stuff does work quite well. We're ably given an insight into the modern, British equivalent of Timon, and he's also unfussily re-gendered a bunch of characters so that there are plenty of women given subsidiary roles beyond the pair of hookers and unspecified number of dancing girls dressed as Amazons who can be found representing womankind in Shakespeare's original.

Indeed, perhaps it works a bit too well to begin with. At the start, we're presented with a self-satisfied, preening, condescending plutocrat, a Gatsby-like void whose only redeeming feature is his apparent generosity. As soon as his money runs out and he is refused any more, he immediately descends into a misanthropic funk that lasts until the end of the play.

What's odd is that Shakespeare doesn't really do much to challenge this.

Timon has two kind of half-nemeses: Apemantus; the big cynic, and Alcibiades; the Occupy London organiser (we'll get back to that). Of these, Apemantus is the only one really given any kind of dialogue with Timon's despair, and he is uniquely ill-placed to conduct it as he's already established that he hates everyone, even while Timon still had cash.

So we've got a play that basically depicts an idiot's hissy fit. Don't get me wrong, it's actually quite entertaining. Timon's post-bankruptcy U-turn is a fine opportunity for Shakespeare to spend a long time decrying people, money, life, and, well, “What have you got?” On the other hand, it's not quite the same impasse as the one in which, say, Hamlet finds himself.

You gave away all your money to people you thought liked you, and now you feel let down? Oh well. It's very hard not to conclude that Mr Timon could do with getting over himself a bit.

So, let's instead turn our attention to Alcibiades. Rendering him as some kind of London riotsy/Occupy London type is an interesting decision. Ciarán McMenamin plays him with a Northern Irish accent, but I don't think that's meant to be relevant (the actor is Northern Irish, after all). More interesting is the fact that in an odd scene in which Alcibiades approaches Timon with a pair of prostitutes in an attempt to relieve him of his money...

(Oh, in the second half, when Timon leaves Athens he stumbles across an enormous stash of gold in the forest/building site where he has resolved to end his days. Sorry, I should have mentioned earlier, but it seemed too silly.)

...well, here, those prostitutes become about 20 Occupy London (or whatever) protesters. This might have simply been Hytner trying to defuse an odd scene, but the possible inference is that Occupy London protesters are all prostitutes; and secretly, (as revealed by the action of the scene) driven by a desire *for* money. Which is a boldly Žižekian point about hidden reverses if ever I saw one. But, whatever. If you didn't know the play, you wouldn't worry about this staging of that scene. It just seems an odd place for something which for the most part is being quite explain-y to end up.

Also interesting, politically, is the way that Hytner seems to be using the play to tell The Rich, that in no way do The Arts Community like them as people. Yes, we like your money, thank you very much, and, yes, we will be obsequious to a fault in order to obtain it, but please, for the love of God, don't mistake that for actual friendship. Which is a pretty bold move in a funding climate like this.

Actually, this is possibly the key to the bits that do fizz a bit here. Elsewhere, Tom Robertson turns wastrel, Timon-debtor Ventidius into an almost treasonable Prince William-alike Yah. And you do get the feeling that Hytner is enjoying using the play to needle away at a certain mileau; the champagne receptions are just that bit too well-observed to be mere coincidence.

On the other hand, I'm not quite sure that in doing so, and partly in casting Simon Russell Beale, he hasn't quite gotten the most available out of the play. Simon Russell Beale, while often articulate, funny and even moving at times, does seem to be phoning in a performance that we've all seen him give before (I know that's not how acting works, but, seriously, I think we're at a point now where we can admit that SRB does very much tend to find himself in a lot of the characters he plays). Hilton McRae offers an understated, burringly Scottish Apemantus, and struggles to reconcile his character's apparent anger with the ennui that it's produced, winding up as little more than a younger, low-grade, epithet-riddled Victor Meldrew.

Ultimately, this is a perfectly good account of the play. The set in the first half is just about the most under-designed thing – although there's a moment where it finally fucks off at the end of part one where, for three minutes, the stage actually looks pretty good. The acting, once you get used to it, communicates the meaning of the words, and gives an impression of how the characters feel. What one never really glimpses, however, is the extent or savagery of the very real anger which is just being flirted with here.
Posted by Andrew Haydon at 23:38

You've made me feel better about missing this one. Thanks.